The story of the “Miracle on the Hudson” and the investigation that followed is the main focus of Clint Eastwood’s Sully, a likeable crowd-pleaser starring very likeable Tom Hanks as the titular character, Chesley “Sully” Sullenberger.

Minutes after take-off from LaGuardia airport on January 15, 2009, US Airways flight 1549 crossed paths with a flock of Canada Geese, knocking out both engines and forced to make an emergency landing on the Hudson River. It was the skill and experience of Captain Chesley “Sully” Sullenberger (Tom Hanks) and First Officer Jeffrey Skiles (Aaron Eckhart) that averted disaster, effectively landing the plane in one piece and saving the lives of 155 passengers and crew. The National Transportation Safety Board believes this to be unprecedented and begins to conduct an investigation, looking to place blame on Sully and Skiles. But, as Sully tells them, “Everything is unprecedented until it happens for the first time.” Sully begins to suffer from PTSD, having nightmares and hallucinations about crashing his plane into skyscrapers, and is also overwhelmed by all of the media attention. While all of this is happening, the NTSB is running simulations that show that Sully could have made it back safely to either LaGuardia or Teterboro airports, and there is also evidence that one of the engines may have been idle, adding weight to his choice for landing on the Hudson not being the correct one.

Sully is Tom Hanks’ movie. He is in nearly every scene, and he does what he does best, playing an everyman dealing with an impossible situation. His portrayal is often low key and soft spoken, but with authority. Aaron Eckhart plays Skiles with a bit more machismo, often standing up for Sully during interviews and interrogations. Laura Linney, who plays Sully’s wife Lorraine, does what she can with a role that never gets to interact with any of the main characters face to face, as she is often speaking on the phone to her husband in nearly every scene she appears in. The three NTSB investigators, played by Anna Gunn, Mike O’Malley, and Jamey Sheridan are stereotypical government investigators, looking to place blame on someone, and the roles are, perhaps, the most underwritten in Todd Komarnicki’s screenplay. Director Clint Eastwood breaks up the story by placing the start of the investigation during the first act of the film and re-enacting the historical event to the midpoint of the film, which allows him to keep Sully moving at a good pace for its brief 96 minute running time.

Sully was filmed almost entirely in 6.5K with Arri Alexa IMAX cameras and completed as a 4K digital intermediate. This 4K UHD presentation replicates the movie’s traditional theatrical 2.40:1 aspect ratio. Fine detail is exceptional throughout, showing off imperfections in the wallpaper in the hotel conference room during the opening interrogations as one of the many examples. Colors are natural but a bit soft, likely a stylistic choice by Clint Eastwood. Contrast is spot on, with deep blacks sporting fine shadow detail. This sin one of the best, natural-looking UHD releases I’ve seen so far.

Both the UHD and Blu-ray versions contain the same Dolby Atmos mix (with a Dolby TrueHD 7.1 core). While Sully is very much a dialogue-driven film, there are some great demo-worthy moments on display here that use the heights effectively, even when played back in a 5.1 configuration with additional front heights and Pro-Logic IIz enabled. It’s a given that the re-enactments of the plane landing (and dream crashes) would provide wonderful sonic demos, but there is also a moment in the film when Sully is jogging at night along the waterfront, and hears several voices in his head. These voices can be heard in the lower left, lower right, upper left and right, and behind. It’s a subtle use of what Atmos is capable of, but well worth noting.

All of the special features can be found on the included Blu-ray edition, but I wanted a bit more information on the making of the film.

Sulley Sullenberger: The Man Behind the Miracle (1080p; 19:49): A look at the life of Sully Sullenberger, through archival photos, movie clips, and interviews with Sullenberger, his daughter, wife, and co-workers.

Neck Deep in the Hudson: Shooting Sully (1080p; 20:17): More of a typical EPK filler on the making of the movie, with interviews of the cast and crew. I would have preferred something a bit more in-depth.

Digital HD Copy: An insert contains a code to redeem a digital copy through Ultraviolet partners. If redeemed through Vudu, users get access to a streaming UHD version of the film.

Sully is an interesting and entertaining film, although it may have taken some creative license on its portrayal of the NTSB. Video and Audio are solid on this 4k UHD release, although the special features are a bit light. 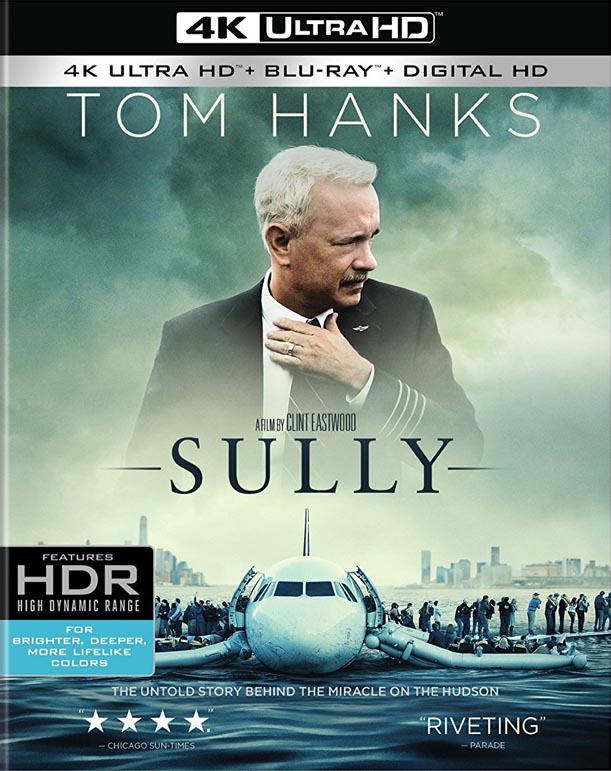