Forum List What's new Dark Style Change width
Log in Register
What's new Search
Menu
Log in
Register
Navigation
Install the app
More options
Dark Style
Close Menu
Posted on October 20, 2021 by Todd Erwin
You are using an out of date browser. It may not display this or other websites correctly.
You should upgrade or use an alternative browser.
That’s the fact, Jack! 4.5 Stars

Sony brings Stripes to 4K as part of the film’s 40th anniversary, including it as part of the 6-film Columbia Classics 4K Ultra-HD Collection, Volume 2.

John Winger (Bill Murray) is having a bad day. Something of a slacker, he loses his job, his car, his girlfriend (Roberta Leighton), and his apartment all in the span of a few hours. His good friend, Russell (Harold Ramis), has just taken a job teaching English as a second language to a group of immigrants. Seeing their lives going nowhere, John hatches a plan to join the Army, enticed by free rent, free food, free clothing, and free travel. Russell drives John to the enlistment center and ends up getting roped in to enlisting as well. When they arrive at bootcamp, they are in for a shock in the form of drill Sergeant Hulka (Warren Oates), who takes an instant dislike for John’s tom foolery and unwillingness to take anything seriously and has the challenge of shaping a band of misfits into a working platoon. To compound matters, newly arrived Capt. Stillman (John Larroquette) is informed that one of his platoons will be selected to go to Italy to train on a new military assault vehicle, the EM-50. John and Russell find that they have it much easier than the rest of the crew, having caught the eye of two female MP’s, Stella (P.J. Soles) and Louise (Sean Young). Will they survive Basic Training?

As the story goes, director Ivan Reitman came up with the initial idea for Stripes after the premiere of his directorial debut, Meatballs, made at Paramount. He pitched the studio a military comedy starring two of their biggest stars at the time, Cheech & Chong. That idea eventually evolved from two stoned-out slackers to two misfit slackers, the project moving to Columbia Pictures, and Meatballs co-writer Harold Ramis was brought in to tailor the project to Bill Murray, casting Ramis as best friend Russell to further entice the then-newcomer to Saturday Night Live. It worked, and several other newcomers (Judge Reinhold, John Larroquette, John Diehl, Sean Young) and veteran supporting players (John Candy, P.J. Soles) were then cast, the real clincher, though was Warren Oates, who’s performance adds both levity and some real drama to the film (the bathroom sequence between Hulka and John helps set the tone for the second half of the film and ultimately pushes John to become a leader). Stripes is as fresh today as it was back in 1981, a very quotable comedy that my friends and I often found ourselves reciting from thanks to frequent play on cable channels HBO, Prism, and Showtime in the early 1980s.

In 2005, director Ivan Reitman assembled an Extended Cut of Stripes for a Special Edition DVD, adding 18 additional minutes of previously deleted footage. Compared to the theatrical cut, the extended cut doesn’t add much to the story and slows the film down, hence my half-point deduction.

When I first heard that Sony was going to include Stripes as one of the six films in the second volume of their Columbia Classics 4K UHD Collection, I was not all that thrilled. I had always liked the film, but never thought it was a great looking film. Part of that was due to the improper color timing of both theatrical and video transfers of the film made in the 1980s. I remember an informercial for the 2005 Special Edition DVD that played on DirecTV where Reitman praised how wonderful the film now looked after being allowed to properly fix the overall color palette. That new timing, along with the use of HDR10 high dynamic range on this release, have changed that original sentiment dramatically. It’s still not exactly “eye candy,” but it’s not the ugly mess that I remember, either. Colors appear more natural and vivid without being overly saturated. Detail is excellent, from fabric textures to the pock marks in Bill Murray’s face. Contrast is greatly improved, allowing for deeper blacks and strong shadow detail. Film grain is much more noticeable but never distracting. Per the restoration notes from the set’s collectable booklet, this new transfer was created by scanning the original camera negative in 4K, and it definitely shows. In addition, the included Blu-ray has been remastered using this new 4K transfer as its source.

Originally released theatrically in mono, a 5.1 mix was created for the 2005 Special Edition DVD, and the default Dolby Atmos mix (exclusive to the UHD disc) was created from that 2005 mix under the supervision of Paul Ottosson (The Hurt Locker, White House Down). What was a fairly front-heavy mix (included here as a DTS-HD MA track) now has a wider and deeper soundstage with stronger LFE presence and subtle use of heights (Hulka’s welcoming initiation speech includes a nice but subtle helicopter flyover). The film’s original mono track is also included, but only on the theatrical cut.

Special features, both new and old, are spread across both the UHD and Blu-ray discs, with no duplication across formats. My only complaint, though, is the lack of a commentary track on the UHD disc.

UHD Disc:
**NEW** 40 Years of “Stripes” with Bill and Ivan: That’s the Fact, Jack! (1080p; 20:30): After a long introduction of Bill Murray finding the best place in his home to conduct the interview over Skype, the two long-time friends discuss the making of the film.

Blu-ray Disc:
Stars and Stripes – Part One (Upscaled 1080i; 28:14): Director Ivan Reitman and co-writer Dan Goldman, along with interviews with the cast, discuss the making of Stripes.

Audio Commentary with Director Ivan Reitman and Writer/Producer Dan Goldberg: Available only on the Extended Cut, the two discuss the making of the film.

Digital Copy: An insert contains a code to redeem a digital copy on Movies Anywhere. At the time of this review, my code redeemed the theatrical cut with no special features as 4K on Movies Anywhere (HDR10 and 5.1 audio) and Vudu (DV/HDR10 and Dolby Atmos), while iTunes and Prime Video only provided HD versions with 5.1 audio.

Stripes is a 1980s classic comedy that has proven rather timeless over the years. Sony has done a terrific job with this 4K restoration, but the included digital copy redemption on Movies Anywhere is less than desirable.

35% Off $164.99 $106.46 (as of December 3, 2021 22:35 GMT -08:00 – More infoProduct prices and availability are accurate as of the date/time indicated and are subject to change. Any price and availability information displayed on [relevant Amazon Site(s), as applicable] at the time of purchase will apply to the purchase of this product.)

Thanks for the review Todd! I really enjoy this film as a once in a while watch, and felt the last Blu-ray transfer I watched left a lot to be desired.

Watched this for the first time in possibly twenty years the other night and enjoyed it a lot.
Having seen it in original release and one or two video incarnations, my reaction has always been that the film peaks once basic training ends, and the mission that follows has a lot fewer laughs at the expense of action and drags the movie down a little. Knowing it was coming, the final act this time seemed to me to be better integrated than I had previously remembered.

I hope this will be available separately in the near future. One of our favorite films!

Rob W said:
Watched this for the first time in possibly twenty years the other night and enjoyed it a lot.
Having seen it in original release and one or two video incarnations, my reaction has always been that the film peaks once basic training ends, and the mission that follows has a lot fewer laughs at the expense of action and drags the movie down a little. Knowing it was coming, the final act this time seemed to me to be better integrated than I had previously remembered.
Click to expand...

I haven't watched this film in that time frame as well. It's not a film I greatly enjoy for the exact reasons you state. It seems like the first part of the film has a few laughs but gets substantially dragged down thereafter.

However, I am well aware this film has a huge following.

Awesome review, Todd. You can conclude from my enduring signature line below, I'm all in on this one. Finally have something to thank Sony for. It's about time! 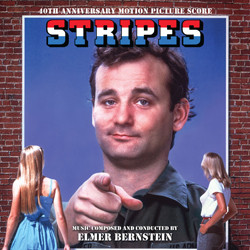 lalalandrecords.com
You must log in or register to reply here.