In the late 1930’s, MGM had two up and coming talents on their roster of stars in Mickey Rooney and Judy Garland; although they were first paired in Thoroughbreds Don’t Cry (1937) and Love Finds Andy Hardy (1938), it wasn’t until Babes in Arms (1939) – the first film produced by former lyricist and future chief architect of MGM’s “Dream Factory” of musicals Arthur Freed – that duo would be firmly established as bona fide stars (a little movie called The Wizard of Oz certainly didn’t hurt Judy’s chances of stardom either). MGM quickly capitalized on this success by pairing Mickey and Judy again (along with Freed producing) in Strike Up the Band, the second of four movies showcasing the duo’s many talents. Warner Bros. has previously released this in the Mickey Rooney & Judy Garland Collection on DVD, but has given the movie a stand alone release on Blu-ray as part of the Warner Archive Collection.

Jimmy Connors (Mickey Rooney) is a drummer in his high school’s band, but has big ambitions of playing in a dance band. Together with Mary Holden (Judy Garland) as his main singer, they form a dance orchestra and have a successful first performance in order to raise money to pay off the school’s debts on the instruments. Thinking even bigger, Jimmy notices a contest sponsored by Paul Whiteman (the King of Jazz himself) and decides to enter the band; however, getting to Chicago for the event takes a few twists and turns that he didn’t anticipate…

As the second of four musicals they would make together, Strike Up the Band stands out as one of the best movies both Mickey and Judy made during their time at MGM. Although it was promoted as being based off of the musical of the same name by George and Ira Gershwin, the title tune is the only true connection here as screenwriters John Monks Jr. and Fred Finklehoffe followed the same formula established in Babes in Arms: fashion a story around the two stars and fill it with a number of great songs and routines. Under the direction of the legendary choreographer Busby Berkeley, there are a number of great routines including “Do the La Conga” with a brilliantly choreographed school dance, the Oscar-nominated “Our Love Affair” (with lyrics by Arthur Freed) which is reprised several times – not only by our two leading stars, but also at one point by an animated orchestra of fruit! – during the film, the Elks club show featuring the sequences “The Gay Nineties” and “Nell of New Rochelle” and, of course, the finale featuring the eponymous title song. While the plot might seem light and thin in places (this was often true of most of the great MGM musicals), it can be forgiven, since the film moves along nicely, making its nearly two hour running time go by quickly without being too rushed. More than 80 years later, Strike Up the Band stands out as an early development in the Dream Factory that was to come in the years ahead as well as a showcase for the many talents in front of and behind the camera.

After scoring an Best Actor nomination of Babes in Arms a year prior, Mickey Rooney has a similar but still effective performance as the ambitious Jimmy; he also gets a chance to show off his drumming skills (he had a real life interest at the time) in the “Drummer Boy” segment. In one of her first movies after the runaway success of The Wizard of Oz, Judy Garland is equally charming as Jimmy’s ‘gal’ Mary; it’s easy to see why both of these two leads had genuine chemistry between them and were among the most popular stars in America at the time. The legendary “King of Jazz” Paul Whiteman has an effective appearance as himself and his orchestra performs a couple of numbers in the movie; June Preisser shows off her acrobatic skills in the “Nell of New Rochelle” sequence and is decent as the new student at school who has her eyes on Jimmy. Other notable appearances and roles include Larry Nunn as Willie Brewster, the fellow classmate who runs into trouble that could derail Jimmy’s plans, Ann Shoemaker as Jimmy’s mother, Francis Pierlot as the principal of the high school, Helen Jerome Eddy as Willie’s mother, an uncredited Jack Albertson as a carnival barker and Mickey’s father Joe Yule as a ticket seller at the fair.

The film is presented in its original 1:37:1 aspect ratio, taken from a brand new 4K restoration of the original elements. Film grain is both sturdy and organic, with grays and blacks represented faithfully in addition to the fine details; there’s minimal problems like dirt, scratches, and tears present. Overall, this is by far the best the movie has ever looked on home video and a major improvement over the previous Warner DVD.

The original mono soundtrack is presented on a DTS-HD Master Audio track for this release. Dialogue is both strong and clear, with the sound mix and song score faithfully represented with clarity and fidelity. Minimal instances of problems like crackling, hissing and distortion are present, which means that this is likely the best the movie will ever sound on home video and an improvement over the previous DVD release.

Introduction by Mickey Rooney (3:16) – Carried over from the 2007 DVD release, Mickey shares some memories of the movie in this brief intro.

Leo is on the Air Radio Promo (14:15) – A vintage promo for the movie featuring Judy singing the film’s title tune.

Excerpt from a 1941 Millions for Defense broadcast (15:15) – This excerpt from the Fred Allen hosted broadcast features Mickey and Judy doing a comical bit with the latter also singing the film’s eponymous song.

1940 Lux Radio Theater broadcast (59:06) – This vintage radio dramatization of the film features Mickey and Judy reprising their roles from the movie.

As one of the studio top grossing films of 1940, Strike Up the Band solidified both Mickey Rooney and Judy Garland as two of MGM’s biggest stars and was an immensely entertaining musical that hinted at future greatness for its producer Arthur Freed. Warner Bros. has done it again with this release in their Warner Archive series, delivering a top notch HD transfer while carrying over the special features from the movie’s previous DVD release. Very highly recommended; bring on the rest of the Mickey and Judy musicals on HD! 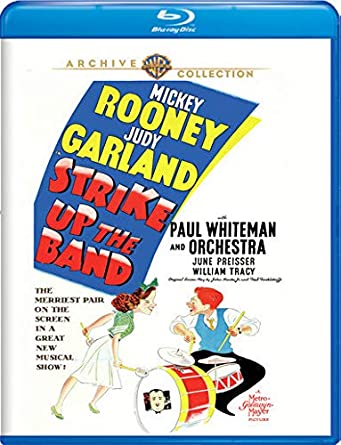