Forum List What's new Dark Style Change width
Log in Register
What's new Search
Menu
Log in
Register
Navigation
Install the app
More options
Dark Style
Close Menu
Posted on December 22, 2017 by Matt Hough
You are using an out of date browser. It may not display this or other websites correctly.
You should upgrade or use an alternative browser.
Gripping abduction story makes for a slightly above average film. 3 Stars

A young, naïve new mother must brave alien territory and duplicitous strangers to locate her kidnapped infant in Niall Johnson’s The Stolen.

A young, naïve new mother must brave alien territory and duplicitous strangers to locate her kidnapped infant in Niall Johnson’s The Stolen. With glorious New Zealand locations and a fine cast of actors, the film has points of interest and a gripping tone, but there are narrative lapses that mar the storytelling at certain points and reduce what could have been a truly compelling film into merely an adequate one.

Happily married new parents David (Lukas Hinch) and Charlotte (Alice Eve) Lockton are startled in the night by bandits who rob them and abduct their three-month old infant. David is left dead, and Charlotte is beside herself when the local authorities can find no trace of her child after three months of searching. A ransom letter demanding money leads Charlotte first to Cork and then on a treacherous and surprise-filled journey to a mining camp called Gold Town where she must pretend to be a showgirl and a prostitute for town bigshot Joshua McCullen (Jack Davenport) in order to have the freedom to look around the camp hoping to find her abducted child.

Director Niall Johnson has co-written the screenplay with Emily Corcoran who also plays the hardest and most authoritative of the prostitutes, Honey. Their story gets the naïve Charlotte to Gold Town on the flimsiest of pretexts; here, of course, she does find her child (too easily for comfort) but is unable to simply claim him and return home. Along the way she’s befriended or assaulted by a number of interesting characters: whores Heather (Gillian MacGregor), Flamenco (Mikaela Rüegg), and Honey, trail boss Bully (Graham McTavish) and his assistants Matai (Stan Walker) and Hunter (Cohen Holloway), and eventually the Gold Town head honcho Joshua McCullen, but the real fun of these encounters is being surprised by who’s friendly and who’s hostile: appearances are often deceiving, and Charlotte herself must shed her innocence in order to endure in this hostile and unforgiving environment. Her growth is necessary for her to have any chance of success, though it happens perhaps more quickly than it would in ordinary circumstances, dramatic license which must be granted for the film to work at all. Director Niall Johnson makes sure the many gorgeous locales of the film get fed to the camera, and he stages a couple of action scenes with equipment problems on the trail and an unexpected ambush quite nicely. But once Charlotte plots her baby’s recovery and their escape, the film begins cutting too many logical narrative corners and devolves into a more predictable cat-and-mouse game.

Alice Eve plays the transplanted Londoner to the wilds of New Zealand with quite an engrossing character arc (though she seems a bit too trusting in the early going knowing how rough-and-tumble the 1882 New Zealand frontier is). Jack Davenport underplays his charlatan rather effectively, while Cohen Holloway’s dangerous Hunter affects an American Southern accent that is completely alien to the rest of the cast though his unbalanced ferocity keeps him as a character never far from the viewer’s thoughts. We’d like to have seen a lot more of Graham McTavish’s ingratiating Bully who leaves the film at the halfway point, but Stan Walker’s Matai certainly adds flavor and color to the storytelling. All three of the whores played by Gillian MacGregor, Emily Corcoran, and Mikaela Rüegg are fascinating characters with backstories we’re only privy to bits of. Richard O’Brien plays a helpful bartender with security but little fanfare.

The film has been framed at 2.40:1 and is presented in 1080p resolution using the AVC codec. While sharpness varies a bit from good to great, color is strong throughout the presentation with skin tones especially lifelike and appealing. Contrast has been consistently applied for an attractive picture. Black levels most of the time are rich and inky blending well into the letterbox bars, but there are occasional moments where they seem a tad milkier than they should. The movie has been divided into 20 chapters.

The DTS-HD Master Audio 5.1 sound mix is an effective one if not quite pristine. Dialogue is sometimes lost a bit in mumbling and busy surround activity with atmospheric effects and music. Paul Lawler’s score does get a beautifully wide treatment into the fronts and rears. Ambiance is likewise nicely handled with split surround effects during the barroom scenes and late in the film on the beach as Charlotte makes her getaway.

The Stolen: Behind the Scenes (23:40, HD): director Niall Johnson discusses the six-year journey to bring his script to the screen, shot quickly in a five-week period with a relatively small ($4 million) budget. Contributing to the story of the film’s production are producer/co-writer/actor Emily Corcoran, director of photography Alun Bollinger, and actors Alice Eve, Jack Davenport, Graham McTavish, Cohen Holloway, Gillian MacGregor, Stig Eldred, and Stan Walker. 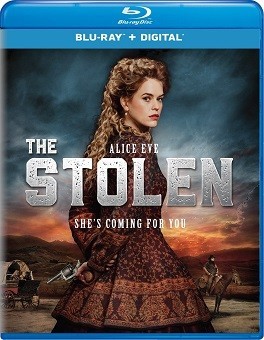