After a number of his popular novels were adapted for the screen, with varying degrees of success, famed horror writer Stephen King went in a new direction and wrote a story directly for the silver screen in the early 1990’s. The result – Sleepwalkers – emerged as a genre favorite in no small part due to the author as well as a story that works quite well. Shout Factory, through their Scream sub-label, has picked up the film and given it a quality Collector’s Edition release.

As the last of a line of sleepwalkers – vampiric creatures who are essentially werecats in their true form – Charles (Brian Krause) and Mary Brady (Alice Krige) roam from town to town, feeding off of the lifeforce of virginal girls in order to stay alive. Their latest stop, the small town of Travis, Indiana, has Charles becoming enamored with Tanya Robertson (Madchen Amick), who happens to be the popular girl at the high school. While Tanya becomes the next target for the sleepwalkers, anyone who happens to stand in their way meets a horrible end. However, the inhuman creatures didn’t count on two things: that Tanya won’t go down without a fight and that the town’s cat population knows what they are and have the strength in numbers to end their killing spree once and for all…

Stephen King’s reputation in the literary world as a master of horror is well deserved, and his work on Sleepwalkers doesn’t diminish it one iota; it’s probably the one work for the screen he can fully call his own out of all the many on screen incarnations of his published work. While there are some moments that look like the movie’s about to careen off the rails into sheer camp, it manages to correct course in the nick of time and deliver another thrill. That can also be attributed to the skill of director Mick Garris; he clearly has a knack for the macabre and manages to set up and execute King’s incomparable vision with great skill and style – it really shouldn’t come as a surprise that Garris (along with Frank Darabont) has become something of a go-to guy for bringing King’s work to life for the screen in the past 25 years since Sleepwalkers. Also worth mentioning is the solid FX work which melded the practical effects of makeup artist Tony Gardner with the then cutting edge use of morphing in a couple of scenes to illustrate the creatures’ shape-shifting nature. All in all, the film should be seen in the same way like the original Poltergeist – a fun little rollercoaster ride with a few good scares and even a little humor mixed in for good measure.

As the charmingly deceptive Charles, Brian Krause brings a golden boy charm that makes his character likeable, despite his villainous intentions. Alice Krige, already familiar to die hard horror fans for her performance in the brilliant Ghost Story (1981), lends a sensual allure to Mary, not at all surprising given how effortlessly she incarnated both allure and malevolence so well in Ghost Story. Just fresh off her appearance in the cult TV series Twin Peaks, Madchen Amick amazingly embodies the virtuous as well as tenacious Tanya; think of her role as a bridge between the typical “damsel in distress” role that horror movies love to use so well and the ultimate incarnation of female impowerment in the horror genre, Buffy the Vampire Slayer. Other notable appearances include Glenn Shadix as the creepy high school teacher who ends up a victim of the Sleepwalkers in a darkly humorous exchange, Ron Perlman as an ill-fated state trooper, Dan Martin as the state trooper with Clovis the Attack Cat as his partner, Lyman Ward and Cindy Pickett (Ferris Bueller’s parents and a real life married couple at that time) as Tanya’s parents, and – in a series of cameo appearances – Stephen King as the cemetery caretaker, directors Joe Dante and John Landis as lab techs, director Tobe Hooper and author Clive Barker as forensic techs, and – in an unbilled cameo appearance – Mark Hamill as the California sheriff in the pre-credits prologue in Bodega Bay.

The film’s original 1:85:1 aspect ratio is preserved in this solid HD transfer. While not billed as either a “restoration” or “remaster”, the transfer reflects the standard we’ve come to expect from Sony; there’s an organic sheen of film grain with a sturdy color palette, including even skin tones and crushed blacks, and fine details are decently rendered. It’s easy to say that this the best the film has looked on home video, surpassing previous presentations on various formats.

The Blu-ray presents two audio options of viewing the movie: a 2.0 DTS-HD Master Audio track presenting the original Dolby sound mix in Stereo and a 5.1 DTS-HD Master Audio track, which is in Surround and is likely a remaster from the original sound mix. Both tracks are strong in fidelity in terms of dialogue, sound effects, and music, with minimal instances of age related artifacts like popping, crackling, or hissing. For those wondering, the 5.1 track is the default option on the disc, but purists will be glad to have the original mix on the 2.0 track as a selectable option; either way, both tracks represent the best the film has sounded on home video.

Audio Commentary by director Mick Garris and actors Madchen Amick and Brian Krause – In this informative and entertaining commentary track, the director and stars of the movie reveal some interesting tidbits about the production; absolutely worth listening if you’re a fan of the movie.

Feline Trouble: Mick Garris interview (18:34) – The director looks back at the production in this new interview; interesting note from this one: Garris wasn’t the studio’s first choice to helm the project – Rupert Wainwright was originally chosen, but Garris doesn’t mention him by name here.

When Charles Met Tanya: Madchen Amick and Brian Krause interview (15:25) – The actors share their memories of the film in this new double interview.

Mother & More: Alice Krige interview (15:49) – The actress, who played Mary Brady in the film, reveals some of her thoughts and feelings about the film and her character in this new interview.

Creatures & Cats: The FX of Stephen King’s Sleepwalkers (15:38) – Maekup artists Tony Gardner and Mike Smithson reveal some of the memories and challenges of the effects of the movie in this new featurette.

Behind-the-Scenes Footage (6:53) – A look at shooting of the climax of the movie; presented in standard definition from footage provided by Mick Garris.

Still Gallery (3:52) – A collection of 50 stills, taken from behind-the-scenes, production stills, promotional material, etc.; some were provided by Brett Cameron.

Sleepwalkers has emerged as a genre favorite over the years following a mixed reception during its initial release – critics weren’t kind to it, but audiences made it a small hit at the box office. Now, Shout Factory has given the movie a solid Collector’s Edition treatment with stellar audio and visual presentation as well as a decent offering of special features. Some may lament over the lack of Stephen King’s participation or the inclusion of deleted scenes, but the quality of the special features offsets some of that disappointment. It’s a worthy addition to the Scream Factory library as well as any horror fan’s shelf.

The movie is enjoyable till the third act when it falls apart pretty hard. Fun to say all the big horror directors of that time doing cameos.
Expand signature
Every man is my superior, in that I may learn from him.
You must log in or register to reply here.
Share:
Facebook Twitter Reddit Pinterest Tumblr WhatsApp Email Link 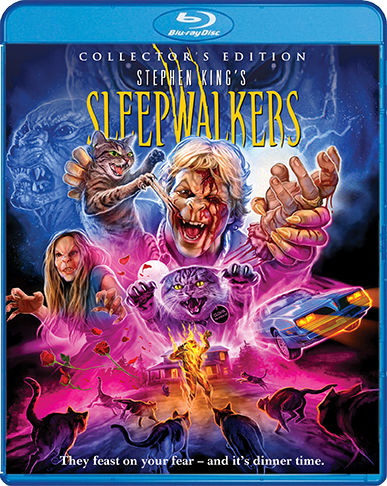