Forum List What's new Dark Style Change width
Log in Register
What's new Search
Menu
Log in
Register
Navigation
Install the app
More options
Dark Style
Close Menu
Posted on June 23, 2016 by Todd Erwin
You are using an out of date browser. It may not display this or other websites correctly.
You should upgrade or use an alternative browser.
Star Trek II: The Wrath of Kirk 4.5 Stars

With the success of 2009’s Star Trek, J.J. Abrams returns to the director’s chair for this second outing that tried so hard to keep the identity of the villain played by Benedict Cumberbatch prior to its theatrical release. Most had figured it out weeks before Star Trek Into Darkness opened, and that is, perhaps, the film’s biggest flaw, as it tries to re-imagine one of the franchise’s most iconic villains, Khan, while occasionally making references to 1982’s Star Trek II: The Wrath of Khan through winks and nudges to the audience.

James T. Kirk (Chris Pine) and the crew of the U.S.S. Enterprise violate Starfleet’s Prime Directive by saving a planet that is about to be destroyed by a massive volcano eruption. As punishment, Kirk loses his command, downgraded to First Officer under Admiral Pike (Bruce Greenwood). Shortly after arriving home, a terrorist first bombs a Starfleet Archive office in London, then opens fire on a conference room at Starfleet headquarters full of top-ranking commanders and their First Officers, including Admiral Marcus (Peter Weller). Pike is killed during the attack, and Kirk wants vengeance, tracking the terrorist, a former member of Starfleet going by the name of John Harrison, to the planet Kronos, deep within Klingon territory and beyond the Neutral Zone. With Marcus’ blessing, Kirk takes command of the Enterprise and its crew, bound for Kronos to surgically terminate Harrison. However, Scotty (Simon Pegg) will not allow any classified missiles on board the ship, for fear it could interfere with the warp drive. When Kirk orders Scotty to allow the missiles on board, Scotty resigns, turning the role of Chief Engineering Officer over to Pavel Chekov (Anton Yelchin). As the crew approaches Kronos, the warp drive malfunctions, disabling the Enterprise. Kirk goes ahead with the mission as planned, taking Spock (Zachary Quinto) and Uhura (Zoe Saldana) with him in a shuttle down to the planet, but are soon discovered by Klingons and ordered to land and surrender. While Uhura tries to reason with the Klingons in their native tongue, she and her crew mates are rescued by Harrison, who has the ability to fire with exact precision, taking out all of the Klingons, then surrenders to Kirk without hesitation once he is told that there are 72 warheads aimed at him. Imprisoned on the Enterprise, Harrison confesses that he is actually Khan, a genetically engineered human, his crew is in cryogenic sleep inside each of the warheads, and Marcus is using Khan as a pawn in trying to launch an all-out war with the Klingons. When Marcus and his ship, the Vengeance, arrive not to save the Enterprise but to destroy it, Kirk only knows what he can do, but not necessarily what he’s supposed to do.

As entertaining as Star Trek Into Darkness is, my real complaint with the film is that it tries to re-imagine the legend of Khan, too often saying Wrath of Khan did it that way, but we’re going to do it this way. This is most prevalent in the third act, with one character sacrificing his life in a similar fashion instead of the one in Khan, the living character uttering the Wilhelm scream “Khaaaan!” before going on a chase to save his friend. Into Darkness is a more grand film than its predecessor, thanks to a very generous budget, and the cast we were introduced to previously pick up where they left off, delivering the same high level of performance as before. Anton Yelchin has a bit more to do in this film as Chekov, but disappears as soon as Scotty reunites with the crew. The same can be said of Karl Urban’s Dr. Bones McCoy, although his spin on his line readings are, again, scene stealers. And Benedict Cumberbatch is brilliantly cast (albeit whitewashed) as Khan, chewing scenery at times, but it’s his non-verbal threats that make him a menacing and chilling villain.

Star Trek Into Darkness was shot using 35mm Panavision and 65mm IMAX cameras, with post production work completed in 2K. The version used on this 4K UHD release is the “IMAX” version, with shifting aspect ratios of 2.39:1 (35mm) and 1.78:1 (IMAX). Simply put, Star Trek Into Darkness is the best looking modern film to be released on the format so far. As you would expect, detail is much more refined than on the Compendium edition Blu-ray (which was reference quality), even more so in the 30 minutes or so of IMAX footage, with colors appearing more natural. Contrast is also improved upon, with deeper blacks and brighter whites (like the previous film, the Enterprise is almost sterile white while the Vengeance is dark with deep shadows). Film grain is present, and never obtrusive or distracting. This disc definitely sets a new standard.

Star Trek Into Darkness was released theatrically with a Dolby Atmos soundtrack (except in IMAX theaters, ironically), and Paramount has outfitted this new UHD release with a home Atmos mix that is backwards compatible to Dolby TrueHD 7.1. My home theater setup only allows, due to the room’s dimensions and size, playback in 5.1, although I have added height speakers to the front very recently, and when played back in Dolby TrueHD 5.1 with ProLogic IIz engaged, this is a reference quality track. Dialogue is clear and intelligible throughout, never getting drowned out by music and effects. Surround activity is vibrant and immersive, with seamless panning effects and strong LFE.

The Mission Continues (2160p; 1:29): A PSA for the organization that assists returning veterans find meaningful ways to contribute when they return home.

Blu-ray Copy: The package also includes the 2-disc Blu-ray release that was part of 2014 The Compendium release.

Disc Two:
The Voyage Begins… Again
Creating the Red Planet
Introducing the Villain
Rebuilding the Enterprise
National Ignition Facility: Home of the Core
Attack on Starfleet
Aliens Encountered
The Klingon Home World
The Enemy of My Enemy
Vengeance is Coming
Ship to Ship
Mr. Spock and Mr. Spock
Down with the Ship
Kirk and Spock
Brawl by the Bay
Fitting the Future
Property of Starfleet
Unlocking the Cut
Visual Affection
The Sound of Music (and FX)
Safety First
Continuing the Mission
Gag Reel

Although not a big fan of this second installment, the disc is overly impressive in its video and audio. Still, with a price tag of $47.99, that’s a bit steep for a catalog title when other titles from other studios are streeting much lower (Amazon has lowered the price on Into Darkness just prior to this review being posted, but not on the previous film).

Thank you so much for this review. I own both the 2009 Star Trek and Into Darkness on 1080p blu-ray and as good as they looked on that format. I just went out and upgraded both to the 4K UHD version and I have to say that Into Darkness looks and sounds incredible. I can not wait to see how this movie sounds in full Dolby Atmos but that will have to wait till my Pioneer Elite SC-05 get upgraded to possibly a Marantz SR-7010. "with one character sacrificing his life in a similar fashion instead of the one in Khan, the living character uttering the Wilhelm scream “Khaaaan!” before going on a chase to save his friend."

That's not how it went down! Spock beams down to Earth with the clear intent of murdering Khan. He didn't know his magic blood properties would save Kirk until Uhura tells him way later in the fight. I'm not saying this to shoot your review down, I'm saying it because I don't want your review to give this film credit it doesn't deserve.

And on a side note, what a misuse of Leonard Nimoy. Not only does his scene serve no purpose and introduces a major plot hole, but the way Prime Spock describes Khan is just wrong. He's a person who will not hesitate to kill everyone on the Enterprise? Uh, funny thing. When Khan was on top of his game and had all the advantages against Kirk in The Wrath of Khan, he did something worse then hesitate. He GLOATED. And after that he sounded perfectly willing to spare Kirk's crew. And there's something about Khan wanting to commit genocide on everyone he deems less than superior? Where did that come from?! That's not Khan's character at all!

Ted Van Duyn said:
That's not how it went down! Spock beams down to Earth with the clear intent of murdering Khan. He didn't know his magic blood properties would save Kirk until Uhura tells him way later in the fight. I'm not saying this to shoot your review down, I'm saying it because I don't want your review to give this film credit it doesn't deserve.
Click to expand...

I was speaking more in general plot points than character specifics.
C

I need a favor. Can anyone check their UHD disc of any of the 3 Trek UHD movies for the exact run-time?
Including seconds. I have a theory but can't test it myself. If anyone can I'd be very grateful!
You must log in or register to reply here. 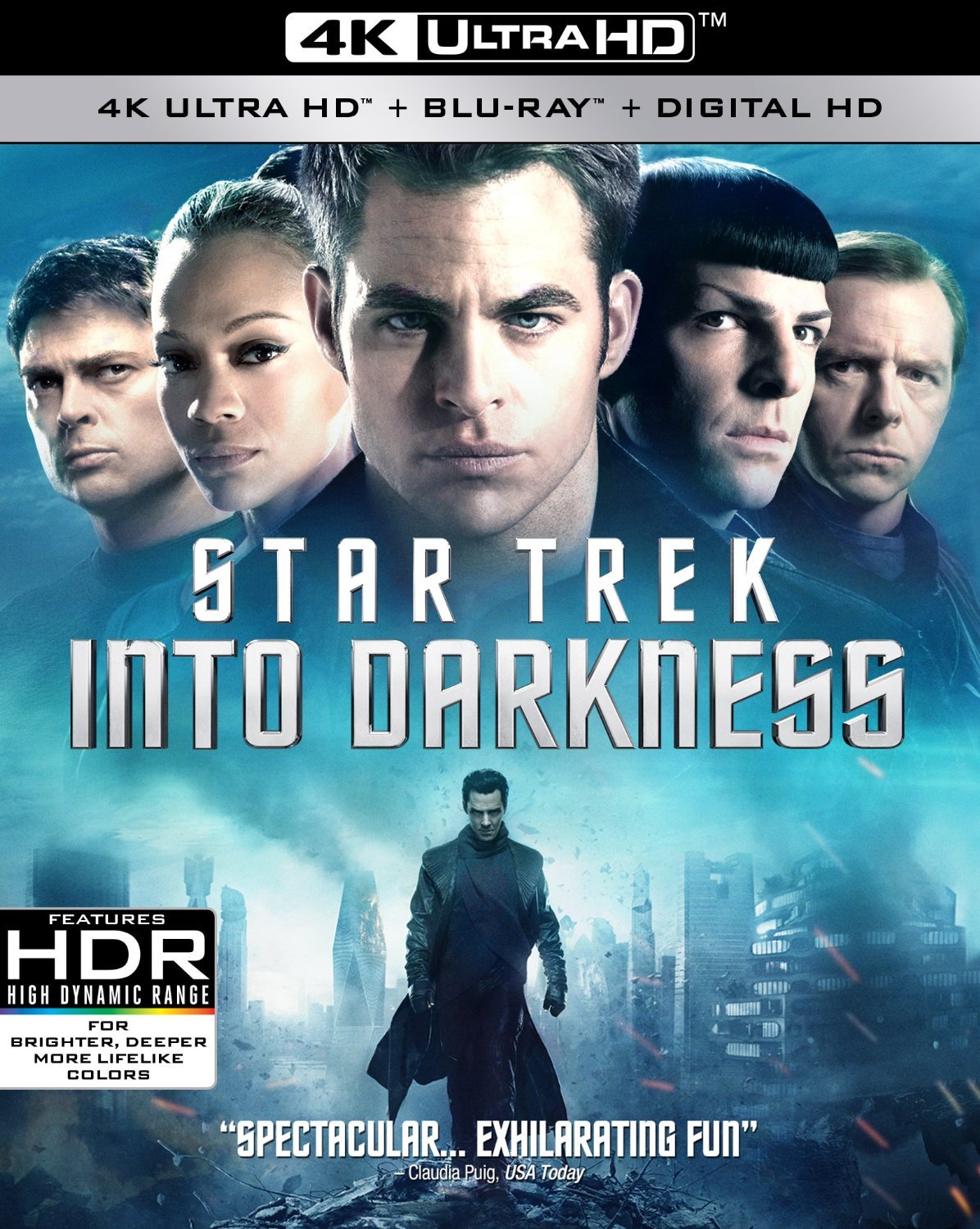