Forum List What's new Dark Style Change width
Log in Register
What's new Search
Menu
Log in
Register
Navigation
Install the app
More options
Dark Style
Close Menu
Posted on November 18, 2016 by Todd Erwin
You are using an out of date browser. It may not display this or other websites correctly.
You should upgrade or use an alternative browser.
Better than the last installment.... 4 Stars

J.J. Abrams turned over the director’s chair to Justin Lin for Star Trek Beyond, the third film in the Kelvin timeline series of films. There is more emphasis on action and character interaction this time out, and it is the latter that helps to honor the franchise’s 50th anniversary.

Three years into their five year mission to explore strange new worlds and seek out new civilizations, Captain James T. Kirk (Chris Pine) feels like he is stuck in a rut, the monotony of travelling through space beginning to take a toll on his spirits. When the Enterprise docks at Yorktown for provisions and R & R, Kirk considers accepting a promotion to Admiral, a move that would take him off the Enterprise. Kirk delays accepting the promotion after a distress call from Kalara (Lydia Wilson) prompts the Enterprise and its crew to travel through an uncharted nebula in an attempt to save Kalara’s crew, but instead the Enterprise is attacked by a swarm of drone-like ships that quite literally tear the ship apart, but not before their leader, Krall (Idris Elba), takes most of the crew, including Sulu (John Cho) and Uhura (Zoe Saldana), hostage in exchange for Abronath, a device that was stored in the ship’s archives. Kirk, Chekov (the late Anton Yelcihin), and Kalara arrive on the planet in escape pods, making their way back the what’s left of the Enterprise to retrieve the Abronath. Scotty (Simon Pegg) befriends Jaylah (Sofia Boutella), a young girl who managed to escape from Krall years before after he killed her family, taking up residence in an abandoned and long thought lost Starfleet ship, the U.S.S. Franklin. Jaylah’s been patching it up, engineering small cloaking and holographic devices to help keep herself hidden from Krall and his crew. Spock (Zachary Quinto), McCoy (Karl Urban), Kirk, and Chekov meet up with Scotty and Jaylah to devise a way to free Uhura, Sulu, and the rest of the Enterprise crew from Krall and save Yorktown from Krall’s mission to wipe them out.

Star Trek Beyond contains much more humor than the previous two Trek films, thanks to a screenplay by Pegg and Doug Jung, that upon the destruction of the Enterprise, pairs up many of the crew’s characters that, up until now, haven’t shared much one on one screen time before. The most interesting is the paring of Spock and McCoy, two characters that have never quite gotten along, but are forced to bond and actually become good friends, giving Karl Urban much more to do than dissect tribbles like he did in Star Trek Into Darknesss. Idris Elba’s Krall is, unfortunately, underwritten as a villain, menacing for sure, but when his background is revealed as a twist (that this reviewer saw many miles away), it is not all that convincing and doesn’t quite pay off. Director Justin Lin (the last four Fast & Furious films) definitely has a  knack for action sequences, and manages to pull them off with ease. It also doesn’t hurt that Lin grew up watching the many incarnations of Star Trek, utilizing his knowledge as a fan to help bring some freshness to many of the characters. The humor sometimes goes a bit too far, with the opening prologue feeling more like an outtake from Gremlins 2: The New Batch than Star Trek.

Star Trek Beyond was captured at 3.4K on the Arri Alexa XT and completed as a 2K digital intermediate. Paramount has upscaled that DI to 2160p and treated it with HDR (high dynamic range). The result is a slightly darker image than what can be found on the 1080p Blu-ray, but with a slightly higher level of fine detail, increased contrast, and more natural colors. Facial and uniform/costume textures are the more noticeable improvements. The overall darker image, however, depending on the display and personal preferences, may be a disappointment to some.

The 4K UHD Blu-ray contains the same near-reference quality Dolby Atmos track (with a Dolby TrueHD 7.1 core) found on the included 1080p Blu-ray. This is a very active and immersive mix, even when played back in a 5.1 configuration with added front heights and Pro Logic IIz enabled. Dialogue is clear and understandable throughout, never getting overpowered by the music and sound effects. Michael Giacchino’s score and additional selections of “classical” music often surround the listener from front, behind, and above, as do atmospheric effects and some occasional discrete effects.

All of the included special features can be found on the 1080p Blu-ray, although Paramount has once again spread around some retailer exclusive bonus features that cannot be found on this edition, regardless of who you purchased it from, including an iTunes exclusive audio commentary. Will they ever learn? What we do get often feel incomplete, as if something is missing.

Deleted Scenes (1080p; 1:02): Two scenes from the cutting room floor, Kirk and Scotty in the Terminal and Scotty Gets a Bib and Tucker.

Beyond the Darkness (1080p; 10:08): Producer J.J. Abrams discusses stepping aside and allowing Justin Lin to take over the director’s chair on this installment, and bringing in Doug Jung and Simon Pegg as writers.

Divided and Conquered (1080p; 8:17): A look at pairing up crew members to better explore the individual characters.

Trekking In the Desert (1080p; 3:06): A look at shooting in the futuristic-looking city of Dubai, which filled in as Yorktown.

New Life, New Civilizations (1080p; 8:04): A look at the 50 different alien species featured in the film as a way to honor the franchise’s 50th anniversary.

For Leonard and Anton (1080p; 5:04): Way too brief tributes to Leonard Nimoy and Anton Yelchin, who both passed away before the film premiered. Previous Star Trek DVD and Blu-ray releases have gone into much more detail in their tributes to other fallen Trek actors.

I was not a big fan of Star Trek Into Darkness, and found Star Trek Beyond to be a pleasant surprise. The 4K UHD may be a bit of a disappointment for those expecting a major improvement over its 1080p Blu-ray counterpart (there is a difference, but it may be too subtle for most), and Paramount’s continued insistence to spread special features out as various retailer exclusives on yet another Star Trek film can be infuriating to fans.

This is up next for me, can't wait.

Started watching the UHd disc this evening. Going through all 3 of the films actually.

Im enjoying the revisit back to all of these films.

INGLORIOUS TREKSPERTS covered 2 podcasts on the kelvin films and it got me interested in going back to watching the films again.

I picked up the trilogy UHd set late last summer.
You must log in or register to reply here. 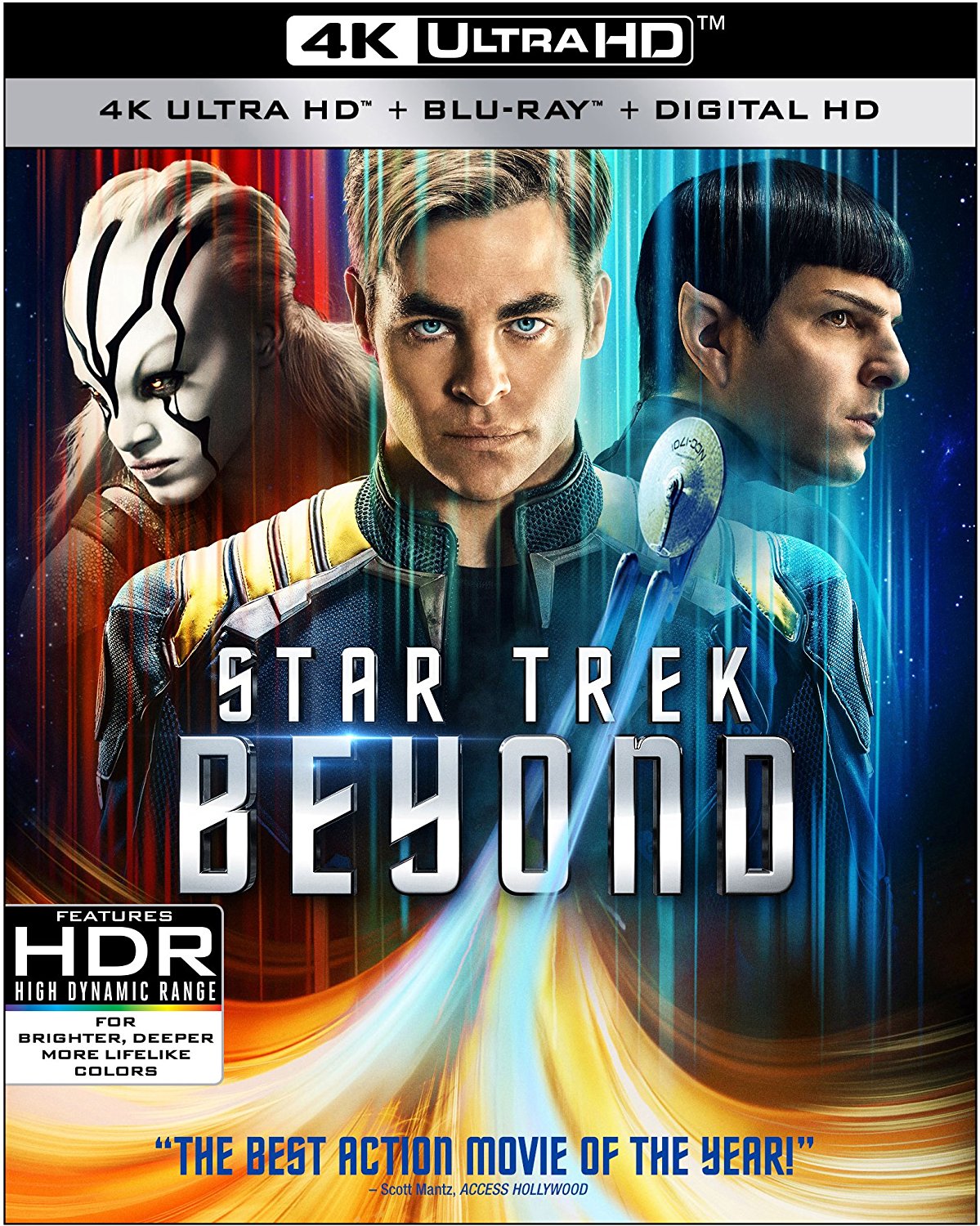