Better than it has ever looked or sounded 4.5 Stars

To generate excitement for Star Trek: Beyond and to test the waters of 4K UHD Blu-ray, Paramount has remastered and released the first two movies in the J.J Abrams reboot of Star Trek. Picture and sound are definitely improved upon on the first film, and it’s nice that the original 2-disc Blu-ray edition has been included here. But pricing the disc at $47.99 is a crime.

Hitting the big 5-0 this year, Star Trek is a franchise that has re-invented itself numerous times. It all began as a television series, created by Gene Roddenberry, which ran on NBC for three seasons, mostly to low ratings, but gained in popularity thanks to syndication. Roddenberry made several attempts to bring the series back, including a Saturday morning animated series on NBC that lasted two seasons in 1973. Five years later, Roddenberry would convince Paramount to make Star Trek: The Motion Picture in 1979, directed by Robert Wise and reuniting the original cast, including William Shatner, Leonard Nimoy, and DeForest Kelley. It was an expensive gamble, but rejuvenated the brand, launching a total of five sequels of varying quality from superb (Star Trek II: The Wrath of Khan) to silly and abysmal (Star Trek V: The Final Frontier). What was missing from those sequels was the involvement of creator Roddenberry, banished by the studio to the role of Creative Consultant. Roddenberry would change history in 1987 by creating a new Star Trek series, and instead of taking it to a major network, he debuted it in first-run syndication. Star Trek: The Next Generation was born, taking place 100 years after the original series, and introducing fans to an entirely new crew led by Captain Jean-Luc Picard, played by Patrick Stewart. The series ran for seven seasons (despite Roddenberry’s passing in 1991), and launched two spinoffs (Deep Space Nine and Voyager) and four theatrical features. When Star Trek: Nemesis, the last film to feature the cast of Next Generation, failed to ignite the box office in 2002 (it opened the week before the first Lord of the Rings movies) and lackluster ratings for the prequel series Enterprise (which followed the early days of Starfleet), the franchise was placed on hold for four years, hoping a new generation of filmmakers could re-invent it and make it seem fresh again.

In 2009, the franchise was handed over to J.J. Abrams, who had made his directing debut with the studio’s Mission: Impossible III, and the writing team of Roberto Orci and Alex Kurtzman. Their idea was to create an origin story for the infamous crew of the U.S.S. Enterprise, but one that was skewed due to a change in the timeline when a Romulan ship from the future, the Narada, arrives in the 23rd century, its commander, Nero (Eric Bana) seeking vengeance and destroys the U.S.S. Kelvin, along with its captain, George Kirk. James T. Kirk (Chris Pine) grows up fatherless and rebellious. Spock (Zachary Quinto) wrestles with his Vulcan and Earthling roots. The two future friends meet at Starfleet Academy as bitter rivals, especially after Kirk alters Spock’s Kobyashi Maru training program allowing him to beat the no-win scenario. We soon meet the future crew of the U.S.S. Enterprise, captained by Christopher Pike (Bruce Greenwood), Uhura (Zoe Saldana), Sulu (John Cho), and Chekov (Anton Yelchin), as Medical Officer Dr. “Bones” McCoy (Karl Urban) smuggles a suspended Kirk on board. The Enterprise encounters the Narada in orbit above Vulcan, as Nero begins to drill into the planet’s core and insert and ignite Red Matter, causing the destruction of the planet. Pike surrenders and is captured Nero, while Kirk and Spock go head to head over what plan of action to take next, with Spock ultimately jettisoning Kirk from the ship for mutiny. Kirk crash lands on nearby Delta Vega, meeting up with a much older Spock (Leonard Nimoy) who explains to Kirk what Nero is up to and why. Spock and Kirk hike to the planet’s Starfleet outpost and meet Scotty (Simon Pegg), who has been banished to the ice planet for losing Commander Archer’s pet beagle in a failed teleportation experiment. Spock beams Kirk and Scotty back to the Enterprise, where Kirk regains control of the ship, heading for a final showdown with Nero.

Star Trek is a very entertaining science fiction film, a definite crowd-pleaser, thanks to an inventive re-imagining of the origins of these characters, but also to the casting of just about every character. None of the actors try to do an impression of the actor that portrayed their character previously. Kirk was a star-making role for Pine, who has a commanding presence in this and the film’s sequel. Quinto makes the transition from his star-making role as serial killer Sylar on the TV series Heroes to Spock seem effortless, retaining the Vulcan characteristics with an underlying sense of emotion. Karl Urban’s Bones McCoy almost steals the show, delivering lines we’ve heard DeForest Kelley utter many times before, but putting a fresh spin on them. Greenwood gives Pike a great balance between authoritative and father figure. Eric Bana makes a menacing and brooding villain in Nero, someone you wouldn’t want to cross paths with. And Anton Yelchin (who passed away too soon) shows his knack for comedy as a very young Pavel Chekov.

Star Trek was shot on 35mm film using Panavision anamorphic lenses and then completed as a 2K Digital Intermediate for theatrical release. So, yes, this is another 4K UHD Blu-ray that was sourced from an upscaled 2K master. Don’t let that deter you, as Star Trek is one of the best upscaled titles currently available on the format, benefiting from the increased resolution, wider color gamut, and especially the higher range in contrast. The interiors of the Narada are close to pitch black, while the deck of the Enterprise are bright white. As good as the previous 1080p Blu-ray release was (and is included in this set), the level of detail now visible within the shadows of the Narada and the almost blown out sterlity of the Enterprise is as if someone corrected the prescription on your eyeglasses. Yes, the overuse of lens flares are still there, and can be a bit more annoying in 4K, as they are much more brilliant and the artificial dirt and waterspots added to the lens are much more noticeable, yet look natural. Colors are also more natural and vibrant, but never over saturated. Film grain is left intact, providing a nice, theatrical-like presentation.

Star Trek has been remixed in Dolby Atmos, backwards compatible to Dolby TrueHD 7.1 for those not equipped. If you are restricted to a 5.1 setup, like myself, the differences between the Blu-ray’s Dolby TrueHD 5.1 and the core 7.1 track on this 4K UHD are subtle. My Marantz SR5008 receiver has the option of 7.1 (rear surrounds) or Pro-Logic IIz, and recently added two front height speakers to take advantage of the latter. The new Atmos mix, when played back in IIz mode, does provide some subtle spatial cues not found on the original 5.1 Blu-ray track from the 2009 release. Other than that, the tracks sound almost identical, with a slight increase in LFE response on the Atmos mix. Dialogue remains intelligible and never gets lost in the mix, reproducing mostly out of the center channel.

Blu-ray Copy: The package also includes the 2-disc Blu-ray release that was part of 2014 The Compendium release.

Disc One:
Star Trek in 1080p and Dolby TrueHD 7.1 audio.
Audio Commentary (same as listed above)

Paramount is fooling themselves by pricing Star Trek and its sequel at $47.99 MSRP (which many retailers are staying firm on, including Amazon) and say they are testing the waters for the format, especially when every other studio supporting the format is releasing their titles at an MSRP between $39.99 and $49.99 with street prices between $19.99 and $29.99. To be fair, Best Buy is selling these discs at the $30 sweet spot, but most stores are already sold out. If you can find it at around $30, go for it. Otherwise, I’d wait for a price drop. 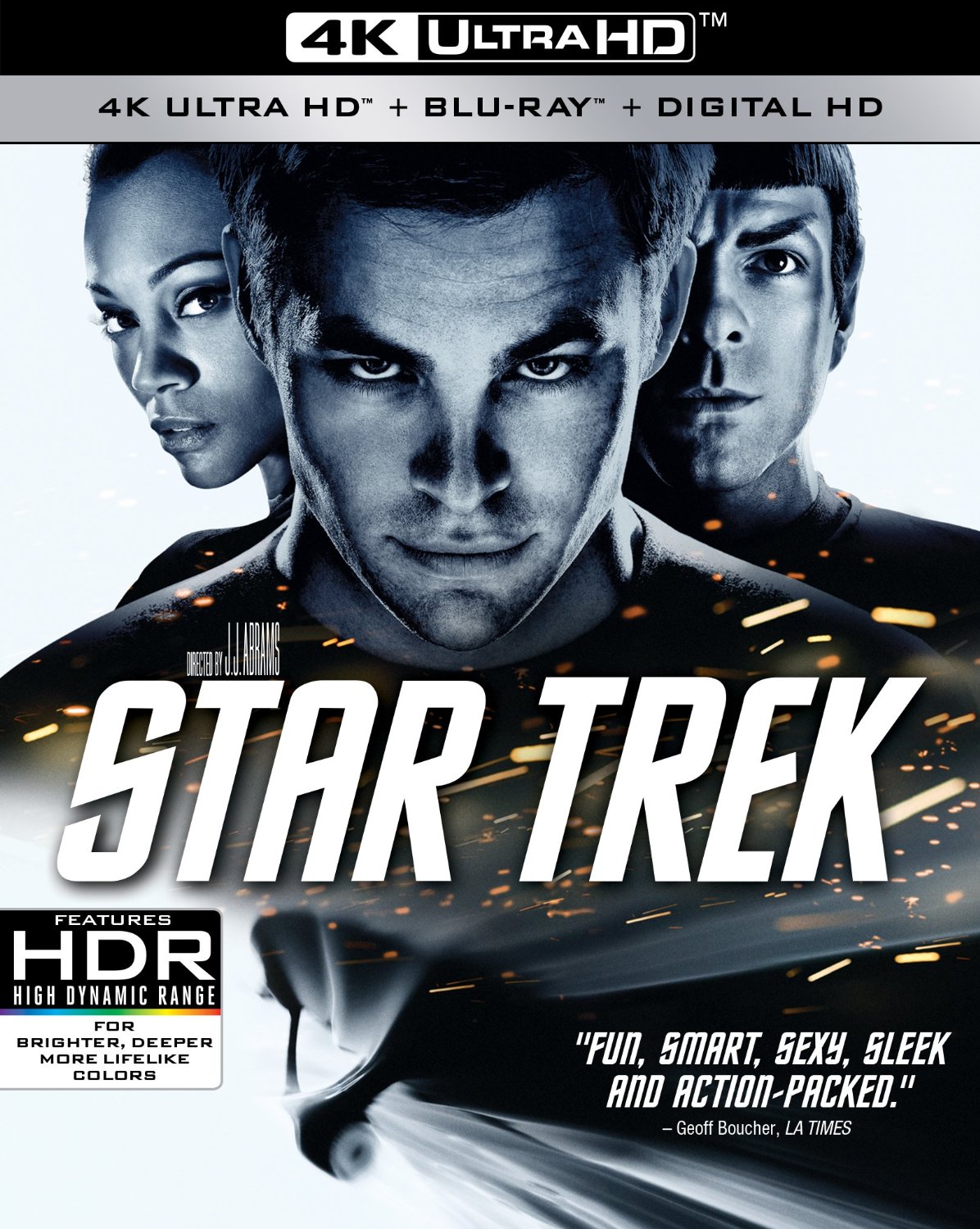