Rob Reiner’s first adaptation of a work by Stephen King, Stand By Me, comes to 4K UHD Blu-ray in a stunning transfer, which should come as no surprise considering this is a Sony title.

Based on the novella The Body by Stephen King from his Different Season collection, Rob Reiner’s Stand By Me follows four young boys in the summer of 1959, their last summer before starting junior high school, as they go on a journey in search of a dead boy’s body. What is interesting is that that is really the only macabre part of the movie; otherwise it’s a sweet and entertaining little coming of age story as these four boys also take a journey to becoming young men. Wil Wheaton (pre Star Trek: TNG) plays the central character, Gordie Lachance, a would-be writer who has become a ghost to his parents after his older brother, Denny (John Cusack), died in a car accident four months prior. River Phoenix plays his best friend, Chris, a hooligan who has potential for better things. Corey Feldman plays the slightly whacked Teddy, a victim of child abuse from his WWII veteran father. Jerry O’Connell plays Vern, the “fat kid” that everyone likes to pick on but gets the journey rolling when he overhears that his older brother may have stumbled across the body of missing kid Ray Brower. Vern’s older brother, Billy (Casey Siemaszco) belongs to gang led by the town bully Ace (Kiefer Sutherland), and Ace’s gang crosses paths with the four boys a few times as they are both searching for the body.

It is the performances of its then-young and mostly unknown cast, the barebones of King’s novella, the script by Raynold Gideon & Bruce A. Evans (Starman), and Rob Reiner’s direction that propel the film into classic status. It has been several years since I last watched Stand By Me, and I had forgotten what a wonderful film this is.

Sony has done it yet again, bringing another classic film from their catalog to 4K UHD Blu-ray. This appears to be a new 4K harvest, as the differences between this 4K UHD presentation (with HDR10) and the included 2011 Blu-ray are striking. Colors are more robust and natural, the lush greens of the woods and blue sky in particular. Detail is exceptional, with the textures of rocks, wood railroad ties, and even facial features like the scars on Teddy’s face. Contrast is greatly improved, with deep blacks (the opening title’s background is a stark black compared to the almost creamy dark grey as seen on the Blu-ray) and bright whites (the outdoor scenes are much brighter but also have a more perceived depth to them).

Stand By Me was originally released to theaters in 1986 with a mono soundtrack, and was remixed in a very pleasing 5.1 for its 2011 Blu-ray release. Sony has now remixed the film in Dolby Atmos for this release, and it is also an improvement over the previous mixes (both the mono and 5.1 are included in DTS-HD MA). For a film originally mixed for mono, this Atmos track is quite impressive, but in very subtle ways. Music and atmospheric effects are expanded to the rears and heights to provide a more immersive listening experience, and heights are used discretely for one scene, where Vern is under the house and overhears a conversation between Billy and Charlie on the front porch above him, with the dialogue emanating from above. LFE presence is minimal, but, again, this was a mono film from the mid 1980s to begin with.

Sony has included some deleted scenes to the UHD disc, with the rest of the special features to be found on the 2011 Blu-ray. Sadly and strangely, a Movies Anywhere code has not been included on this release.

UHD Disc:
Deleted and Alternate Scenes (1080p; 6:17): A total of eight scenes have been included – Through the Fence, Boys Get Ready to Leave, Am I Weird?, Chris’ Final Speech, Train Trestle, Smell Hit the Crowd, Goodbye Looks and Ending.

Blu-ray Disc:
25 Years Later: A Picture-in-Picture Commentary Retrospective (1080p; 92:42): After a brief introduction with Rob Reiner, Wil Wheaton, and Corey Feldman catching up on old times, the three sit down to discuss their memories of making the film. Unfortunately, Secondary Audio must be enabled on your player to hear the commentary track.

Audio Commentary with Director Rob Reiner: Ported from the original DVD release in 2000, Reiner covers much of the same material he coverts in the newer track above, but is still a good listen.

Walking the Tracks: The Summer of “Stand By Me” (480i; 36:46): Also ported over from the 2000 DVD, author Stephen King, director Rob Reiner, and the cast discuss the making of the movie.

Sony continues not to disappoint with the releases of its catalog on 4K UHD Blu-ray. This is a major upgrade over the now eight year old Blu-ray and highly recommended. 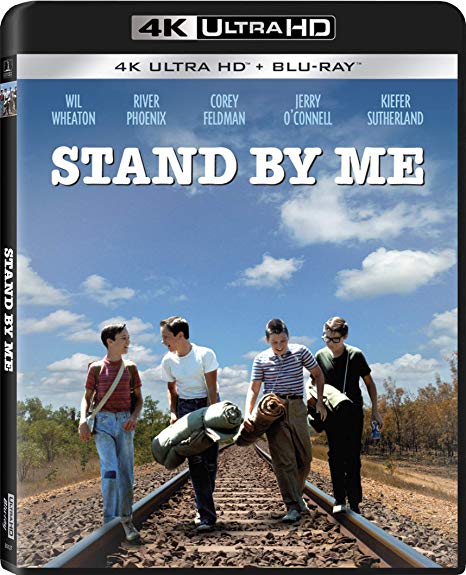