M. Night Shyamalan has written and directed a psychological thriller Split that harkens back to the tremendous impact his early films The Sixth Sense and Unbreakable had on audiences.

Night Shyamalan has written and directed a psychological thriller Split that harkens back to the tremendous impact his early films The Sixth Sense and Unbreakable had on audiences. While not quite reaching the heights in quality storytelling of those earlier works, Split does offer its leading actor the chance to deliver a virtuoso performance, and its fulfillment is so amazing to watch unfold that any lapses in narrative get fairly pushed aside in one’s enthusiasm in watching a fine director steering a first-rate actor toward a career best performance.

[Certain spoilers will of necessity be revealed in the following paragraphs.]

Three teenaged girls are abducted after a party and are taken to a mysterious kind of underground vault containing various rooms, some used for storage and some obviously being used as living quarters. Claire (Haley Lu Richardson) and Marcia (Jessica Sula) are among the most popular girls in school, but Casey Cooke (Anya Taylor-Joy) is considered an oddball who was only invited to the party out of pity. Their abductor Kevin Crumb (James McAvoy) suffers from DID (Dissociative Identity Disorder), and some of his twenty-three multiple personalities can come and go within the blink of an eye. Though his most dominant personality is Dennis, at various times during the girls’ imprisonment, other personas emerge, among them the stern Patricia, the fashion conscious Barry, and nine-year old Hedwig with whom Casey makes a special connection hoping to use their mutual feelings of being outsiders to ingratiate herself with him in order to find an escape out of the bunker where they’re being kept. But Dennis in his regular visits to his psychiatrist Dr. Karen Fletcher (Betty Buckley) keeps insisting that a twenty-fourth persona is about to emerge, a beast with superhuman strength and impervious skin who means to do harm to the girls.

Night Shyamalan’s screenplay waits just a bit to reveal the first of its twists: there is only one abductor but with many different personas, but the remainder of the film is a cat-and-mouse exercise in the three girls each trying different methods of escape which inevitably separate them from one another thus making each girl her own means of salvation. The script eventually focuses on Casey rather than the more popular and predictable other two teens (whose characters are never really fleshed out to the same degree as Casey’s), and Shyamalan employs several flashbacks during the narrative to explain Casey’s abusive backstory and to offer us some insight into her oddball nature (her horrific youthful experiences, of course, will inevitably come in handy during some of the climactic escape scenes). Shyamalan’s several reverse tracking shots throughout the film add lots of tension to the storytelling especially since this underground bunker is dimly lit with who-knows-what hiding in the shadows (the nature of the Beast that Dennis warns us about several times during the film is another of the film’s twists, a twist that will inevitably tie the movie to another of Shyamalan’s triumphs in a final capper).

The bravura performance of James McAvoy in this panoply of roles is simply mind boggling, and it’s one of those performances that will gain in richness with repeated viewings to better watch a master at work. Though playing someone who’s supposed to be an oddball, Anya Taylor-Joy is actually playing a character who is very relatable and possesses her own singular kind of charm and beauty. Betty Buckley’s psychiatrist is around to offer lots of exposition and explanation on dissociative identity disorder so that the twist with the Beast will have some scientific basis in fact. Her character is also remarkably calm through much of the movie with a personality as potentially explosive and dangerous as Kevin’s (though she does have an “ace in the hole,” another in the series of twists which pop up in the movie’s climactic scenes). Haley Lu Richardson and Jessica Sula do fine as the other captured teens in unquestionably underwritten roles. In the flashback scenes, Izzie Leigh Coffey is excellent as Casey while Sebastian Arcelus as her father and Brad William Henke as her Uncle John both score in singular moments.

The film’s original theatrical aspect ratio of 2.40:1 is faithfully rendered in this 1080p transfer using the AVC codec. Sharpness is exceptional throughout the presentation with lots of details to be seen in faces and on skin (most important when that skin detail is revealed). Color is nicely saturated but always under control, and skin tones are true and appealing. Black levels are really exceptional, and since so much of the movie takes place in those dim underground chambers or at night, black levels become a key to the movie’s effective suspense sequences. The movie has been divided into 20 chapters.

The DTS-HD Master Audio 5.1 sound mix uses bass particularly well in the LFE channel to sustain a feeling of anxious dread throughout the movie but especially in its second half. Dialogue has been well recorded and has been placed in the center channel. The pop music supervised by Susan Jacobs and the background score by Wes Dylan Thordson get outstanding spread through the fronts and rears. Atmospheric effects likewise get placed in the proper channels for maximum efficiency and effect.

Alternate Ending (1:37, HD): introduced by the writer-director, the alternate ending isn’t nearly as effective as one currently in the film.

Deleted Scenes (26:37, HD): nine scenes may be watched together or separately and with or without introduction by director M. Night Shyamalan.

The Making of Split (9:50, HD): producers Marc Bienstock and Ashwin Rajan, writer-director M. Night Shyamalan, production designer Mara LePere-Schloop, and actors James McAvoy, Anya Taylor-Joy, Betty Buckley, Haley Lu Richardson, and Jessica Sula discuss what attracted them to the project, what themes resonated with them, and how they were able to bring the story and characters to life.

Split is an excellent psychological cat and mouse thriller with the expected M. Night Shyamalan surprising twists and turns to keep viewers primed and ready for the unexpected. The Blu-ray release boasts exceptional picture and sound quality that belie the film’s rather meager budget restrictions. Recommended!

My wife and I watched this tonight and LOVED it. Your review was spot on, Matt. Thank you!!!
Reactions: Tino and Matt Hough

Loved it, ending made me smile ear to ear.
Reactions: Neil Middlemiss and TravisR

I screened this last night, and perhaps I was expecting too much. I was hoping for an intense psychological thriller with fun plot twists along the lines of Silence of the Lambs, and what the film turned out to be was some sort of amalgam of torture porn and a teenage superhero movie. The whole first two thirds of the movie went in an ordinary straight line with ham handed flashbacks to the girl's childhood. Every move the film made was telegraphed except for the absurd body transformation gag at the end of the movie. The lead actor was excellent. He could have easily carried the suspense through the ending without having to resort to becoming Spiderman. I hope he gets a chance to be in a horror movie that isn't written and directed down to the lowest common denominator in the future.

That actor is James McAvoy. And he deserves an Oscar nomination for his performance imo. And he's already signed for the sequel called Glass which completes the M Night Shayamalan trilogy which began with Unbreakable. 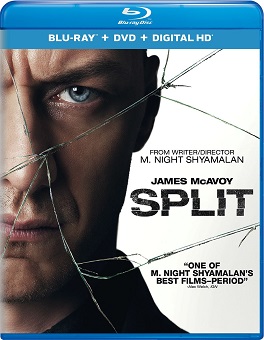