Sony tries yet again to launch a Spider-Man franchise, this time enlisting the aid of Marvel Studios, allowing Spider-Man: Homecoming to be part of the MCU. The result is a fun, light, and often humorous summer popcorn movie.

After the disappointing Amazing Spider-Man 2, Sony wanted to go back to the drawing board and launch another reboot of the classic comic book hero. Marvel Studios, coincidentally, was wanting to bring some of its other properties back into the fold as part of its Marvel Cinematic Universe, giving characters supporting roles and cameos to its movies. Long story short, Sony and Marvel were able to hammer out a deal where Spider-Man would make a cameo in Captain America: Civil War and would produce at least two Spider-Man movies for Sony.

To their credit, screenwriters Jonathan Goldstein, John Francis Daley, Jon Watts (who also directed), Christopher Ford, Chris McKenna, and Erik Sommers don’t try to tell a third origin story (hinting in dialogue how Peter got his powers), and instead pick up the story pretty much where Civil War left off. Peter Parker (Tom Holland) is a nerdy fifteen year-old brainiac who, after being given a taste of what an Avenger can be like from Tony Stark (Robert Downey, Jr.), spends his after school hours fighting crime, badly. That is, until he stops an ATM robbery by a group of burglars dressed as The Avengers who are armed with high tech weaponry. As it turns out, that weaponry is being designed and sold on the black market by Adrian Toomes (Michael Keaton) and his team of salvagers who have been hijacking artifacts left behind by The Avengers after their battles with aliens. Toomes steals these artifacts in a winged flying suit, also created from those artifacts.

Spider-Man: Homecoming is both a typical comic book movie with our hero battling a bad guy who doesn’t think he’s doing anything really wrong, and a 1980s-style high school teen dramedy, and walks that tightrope well-balanced. Holland brings an infectious innocence and nervousness to this much younger version of Peter Parker and Spider-Man than we’ve seen before (not counting Civil War). Providing Parker with a sidekick, Ned (Jacob Batalon), adds to the humor of the story, and Batalon benefits from getting some of the best lines. Michael Keaton plays Toomes as a narcissistic sociopath who believes what he is doing is saving his family while taking what should have been rightfully his, and plays it with too much ease. Robert Downey, Jr. has perfected the Tony Stark character he has played in six films prior to this one, so there is nothing really new for him to bring here, but is still a joy to watch. Marisa Tomei is charming as a much younger Aunt May, but never gets enough screen time for her character to really develop. The real fun of the film are the public service messages from Captain America (Chris Evans), particularly the one at the conclusion of the end credits. Director Jon Watts (Cop Car) balances the humor and action well, keeping the 2 1/4 hour movie running at a brisk pace.

Spider-Man: Homecoming was captured at 2.8k resolution on Arri Alexa Mini and Alexa XT Plus cameras and completed as a 2k digital intermediate with Dolby Vision high dynamic range color grading. Sony’s 4K UHD Blu-ray upscaled that DI to 2160p, retaining the Dolby Vision HDR. The result is a more finely detailed image, particularly in the fabrics of the costumes and textures of surfaces like glass, deeper blacks that retain shadow detail, and brighter whites that don’t bloom. Colors are also more natural and have a wider gamut, allowing Spider-Man’s suit to really pop without bleeding (always a possible issue with reds). This review is based on equipment only capable of HDR10.

As with most Sony 4K UHD releases, this is the only way you are going to get a lossless Dolby Atmos track on disc of Spider-Man: Homecoming (Vudu offers Dolby Atmos on their UHD version, but is not lossless). The included Blu-ray comes with a DTS-HD MA 5.1 track that is good, but the Atmos track, played back in Atmos (I have a 5.1.2 configuration in my reviewing room) or TrueHD 7.1 (in my living room) is a much wider soundscape with a fuller low-end. The Atmos track takes full advantage of the heights, placing Karen’s voice in both the center and height channels to give an in-your-head sound, but also using those heights for atmospheric effects when Spidey is flying among the skyscrapers of New York, and giving Michael Giacchino’s score an extra sense of immersion. Dialogue is spread across the entire soundstage, but directed mostly to the center channel, and is never lost in the mix.

Two of the Special Features are available on the UHD disc, while the rest can be found on the included Blu-ray disc.

UHD Disc
The Spidey Study Guide: A subtitle trivia track that plays along with the movie.

Photo Gallery (1080p): A collection of 81 production and promotional stills from the movie.

The Vulture Takes Flight (1080p; 6:01): A look at the character of Toomes, played by Michael Keaton.

Pros and Cons of Spider-Man (1080p; 3:28): Tom Holland and Jacob Batalon discuss the advantages and disadvantages of being Spider-Man.

Rappin’ with the Cap (1080p; 2:26): Four PSA’s by Captain America, some of which were briefly featured in the finished film, playable as one feature or each individually; Safety First, Food For Thought, Brain Power, and Your Changing Body.

An Inside Look at Marvel’s Spider-Man / PS4 (1080p; 2:45): A behind the scenes look at the PlayStation 4 exclusive game developed by Insomniac Games.

Digital Copy: An insert contains a code to redeem a digital copy at Sony Pictures Store, but can also be redeemed at UltraViolet and Movies Anywhere retailers.

I thoroughly enjoyed this latest Spider-Man effort, as did audiences worldwide last summer. Both video and audio are exceptional on the UHD version, and the Blu-ray comes with a wealth of extras. 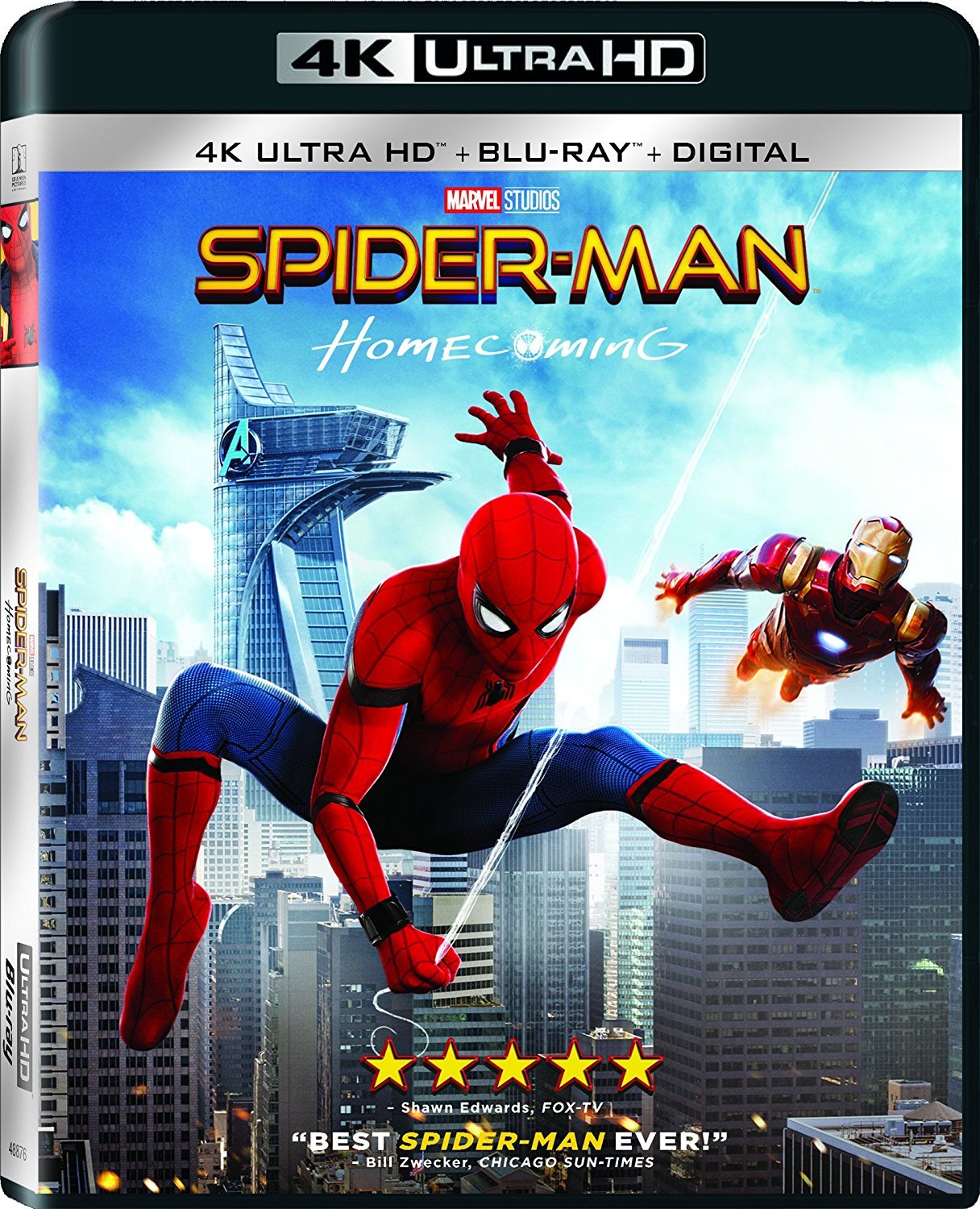