Forum List What's new Dark Style Change width
Log in Register
What's new Search
Menu
Log in
Register
Navigation
Install the app
More options
Dark Style
Close Menu
Posted on September 25, 2019 by Todd Erwin
You are using an out of date browser. It may not display this or other websites correctly.
You should upgrade or use an alternative browser.
Spider-Man’s European Vacation 4 Stars

Marvel Studios and Sony team up (for the last time?) for Spider-Man: Far From Home, closing out Phase 3 of the Marvel Cinematic Universe.

Now that the Avengers have more or less fixed everything after Thanos’ snap, people are trying to put their lives back in order. Aunt May (Marisa Tomei) runs a non-profit that raises funds to help those, like herself, that were displaced by the snap after returning from oblivion five years later. Her spokesperson, of course, is Spider-Man, her nephew Peter Parker’s (Tom Holland) alter ego. Happy Hogan (Jon Favreau), the head of security at Stark Enterprises, has eyes for Aunt May (and vice versa). But just as everything in the world seems to be back to normal, a cyclone with a face attacks a small town in Mexico. Nick Fury (Samuel L. Jackson) and Maria Hill (Cobie Smulders) arrive on the scene, only to see the cyclone defeated by Mysterio (Jake Gyllenhaal), who later warns them that three more elementals are going to attack very soon in Europe. Fury attempts to contact Peter Parker, only to be ghosted by the teenage superhero as Peter gets ready for a class trip to Europe. Peter’s plans in Europe are to purchase a locket and present it to MJ (Zendaya), professing his feelings for her. But Fury has other plans, hijacking the class trip in order top get Peter to cooperate and help Mysterio defeat the remaining elementals. This takes the class from Venice to Prague, where they soon learn that Mysterio may not be who he says he is, leading to a big showdown in London.

Spider-Man: Far From Home almost mirrors my European vacation 15 years ago, having visited many of the same tourist locations in London (London Bridge, Tower of London, Thames River) and Prague (Charles Bridge), only my wife and I went to Paris instead of Venice (although Peter and his class were supposed to go to Paris instead of Prague). The movie captures those locations quite beautifully, while still telling a story that is a fun way to put your mind and worries on hold for just over two hours. This is a much lighter and more down to earth story than the dark heaviness of the last two Avengers movies, but it also lacks a strong, menacing villain. Most people can relate to the awkwardness of the relationship between Peter Parker and MJ, and that is played out rather well. Peter’s friendship with best bud Ned (Jacob Batalon) is also one of the highlights in terms of character relationships. Jackson and Smulders make a great pair, at least platonically, trying to save the world (again) with very limited resources. The relationship between Hogan and May does not get as much screen time as advertised, but it is a fun diversion. Seeing Spider-Man: Far Form Home after all the press coverage of the split between Marvel Studios and Sony makes the film feel like it could be a complete waste, setting up plot points for future films that may now never actually pan out.

Spider-Man: Far From Home was captured at 8K, 3.4K, and 2.8K resolutions using Arri Alexa Mini and Red Ranger 8K VV cameras, then completed as a 2k digital intermediate with Dolby Vision high dynamic range for its premium theatrical engagements. Sony’s UHD Blu-ray release utilizes an upscaled 2160p transfer with both HDR10 and Dolby Vision high dynamic range, retaining the film’s non-IMAX theatrical aspect ratio of 2.39:1 throughout. The disc was reviewed on equipment capable of HDR10 only. This is a noticeable upgrade over the included Blu-ray edition. Colors are much more refined, with a larger range of color gradients with Spider-Man’s suit appearing more red on the UHD than almost magenta on the Blu-ray, with many colors appearing overly saturated on the Blu-ray as well. Contrast is much more controlled as well, in particular the battle in Old Town Square in Prague during the nighttime carnival. The Blu-ray appears to have been artificially lightened to bring out the highlights while the UHD appears more naturally dark with shadow highlights and details. Detail is also improved, with more refined grains of sand during the opening sequence and facial features and imperfections on Samuel L. Jackson and Tom Holland, for example.

Sony has provided a disappointing Dolby Atmos track to the UHD disc of Spider-Man: Far From Home, so much so that the DTS-HD MA 7.1 track on the Blu-ray blows it out of the water. The Atmos track is flat even when pumping the volume past your normal levels. The Blu-ray’s 7.1 track is much more lively and robust, a much wider dynamic range than what is on the Atmos track. Action scenes a much more lively, with intense LFE and surround use, while the Atmos track just kind of sits there. There are some discrete effects to be sure, like the hammering at the motel in Venice, but like I said, the action sequences just don’t come to life like they do on the Blu-ray. On a positive note, dialogue is clear and understandable throughout. Quite the missed opportunity, and one time I wish the studio had included the DTS-HD MA 7.1 track on the UHD along with the Dolby Atmos.

Stepping Up (1080p; 3:42): Rather ironically, director Jon Watts opens this featurette by saying “This movie is going to show you what Peter’s place is gonna be in this universe moving forward.”

The Ginter-Riva Effect (1080p; 1:32): A look at a rather minor character from the early days of the MCU that plays an important role in this film.

Thanks Todd! PS I think release on the 4K should be 10/1. I thought “wth did I miss this release?!?!” And then I clicked on the Amazon link.

Patiently waiting for my 3D copy.

Ditto for 3D. Thanks eBay

As CRAZY as this sounds - I actually thought the surround use was way over the top and quite distracting at times in 7.1 and turned down my amps rear settings! I don't own a 4K player but maybe this would be a more "subtle" experience?

Carlo Medina said:
Thanks Todd! PS I think release on the 4K should be 10/1. I thought “wth did I miss this release?!?!” And then I clicked on the Amazon link.

Typo corrected - this releases Tuesday, 10/1. Thanks!

Thanks for the review, Todd. Disappointed that Sony has yet again opted not to include an audio commentary.

Not a waste after all!

Seeing Spider-Man: Far Form Home after all the press coverage of the split between Marvel Studios and Sony makes the film feel like it could be a complete waste, setting up plot points for future films that may now never actually pan out.
Click to expand...

He also happens to be the only hero with the superpower to cross cinematic universes
Click to expand...

Nice review Todd.
I agree with you, the video quality was just spectacular. I was so pleased to see how great a 4K disc can look. I have the 3D pre-ordered also, but this is going to be a tough act to follow. The 3D "immersion" might not win out over 4K precision this time around.
You must log in or register to reply here. 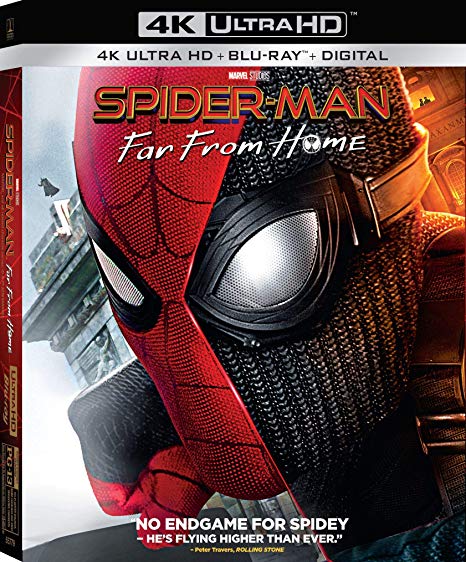