Generic story and subpar animation don't add up to much. 2.5 Stars

Mediocre animation and unoriginal story ideas don’t add up to very much in Aaron Woodley’s Spark: A Space Tail.

Mediocre animation and unoriginal story ideas don’t add up to very much in Aaron Woodley’s Spark: A Space Tail. With narrative tropes borrowed from Star Wars and other space operas of the last forty years, Spark: A Space Tail doesn’t seem to have an original bone in its body once you get past its central notion of the main characters as anthropomorphized monkeys, foxes, pigs, and roaches. Otherwise, this is totally predictable and unappetizing fare which maybe the smallest of fry might find momentarily distracting.

Spark (Jace Norman) is a wisecracking monkey newly turned thirteen who lives on the otherwise uninhabited chard of the planet Bana with his guardians Chunk (Rob deLeeuw) and Vix (Jessica Biel) and his robot nurse Bananny (Susan Sarandon). Thirteen years ago, power-hungry Zhong (Alan C. Peterson) seized control of their planet Bana wiping out Spark’s family and sending him into hiding. Now, Zhong plans to use the deadly space Kraken to take over as many planets as he wishes while Bana’s former Queen (Hilary Swank) is helpless to stop him. Spark has tired of all the years of training with no actual action and steals away one night with the one remaining warship to seek his own vengeance against Zhong, a mission that has little hope of succeeding with Spark’s lack of combat experience and with no one else to help him except his trusty roach friend Floyd (Aaron Woodley).

Writer-director Aaron Woodley’s story is generic from the rebellious teenager out to prove his mettle to the maniacal ruler bent on universal domination. Of course, early initial disaster leads to a summoning of inner courage and strength for a return fight to the death, all done step-by-step in the basic generational confrontational playbook. There are two martial female characters, one on each side (Vix on Spark’s side and Zhong’s muscular bodyguard Koko (Athena Karkanis)) that you know will certainly face-off at some point during the climactic scenes and two bungling characters on Spark’s side (Chunk and the leader of the Royal Guard, the Captain (Patrick Stewart)) who will somehow marshal their klutziness to contribute to the victory for the side of good. All of this might be overlooked or at least partially excused if the animation here were something special, but the CG work here is much more akin to television animation (individual hairs on the characters with hair have not been animated individually so that hair forms matted clumps on their bodies and the use of contours for shading and graphic detail is simply not present) again making the film something undiscriminating tykes might not notice or care about but those more accustomed to the glorious intricacies of Pixar, Disney, Dreamworks, and Illumination will undoubtedly notice.

There is nothing wrong with the voice work for the characters. Jace Norman really gets into character as the energetic, enthusiastic, and impulsive Spark and plays all of the adolescent’s emotions perfectly. Susan Sarandon has some fun with the rickety collection of nuts and bolts that passes for a robot nanny, and both Jessica Biel and Hilary Swank give nobility and calmness to their roles of Vix and the Queen respectively. Patrick Stewart’s a hoot as the scatterbrained Captain of the Royal Guard. Rob deLeeuw has a kind of John Goodman-like goofiness as the lovable lug Chunk, and Athena Karkanis offers a stereotypical butchness as the brutish Koko. Alan C. Peterson, of course, as the evil chimp overlord looking to expand his domain gets to overact to his heart’s content relishing his every command as the dominating dictatorial monarch.

The film’s 2.40:1 theatrical aspect ratio is faithfully rendered in this 1080p transfer using the AVC codec. While expert sharpness reveals all that there is to see here despite the mediocre animation techniques, there is evidence of some slight aliasing in tight line patterns. Colors are fluorescently bright but under control, and there is no banding present to mar the image quality. Blacks aren’t really very black with the depths of space being rendered more of a medium gray in tone. The movie has been divided into 20 chapters.

The DTS-HD Master Audio 5.1 sound mix offers a room-filling surround explosion throughout the film’s ninety minutes. Dialogue has been routed to the center channel, but Robert Duncan’s wall-to-wall score gets the complete surround treatment, and there are numerous pans across and through the soundstage of various atmospheric effects that help make up for the lackadaisical animation.

A Creative Spark: Voicing the Characters (3:06, HD): Jace Norman, Jessica Biel, Susan Sarandon, Patrick Stewart, and Hilary Swank speak briefly about their delight in voicing their characters for the movie.

Bringing Spark to Life (3:05, HD): a montage of the various stages in the construction of a sequence from storyboards through final rendering.

Spark Concept Art Reel (1:43, HD): a montage of concept art for the characters and important sequences in the movie.

The younger members of the family who don’t usually discern differences between feature film and TV-grade animation may find Spark: A Space Tail worth ninety minutes of their time; their parents and older siblings most definitely won’t. The Blu-ray disc does offer a colorful looking and explosive sounding experience for the curious, but this is a most forgettable animated effort. 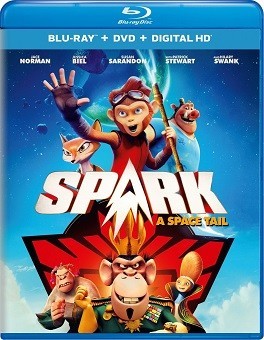