Sci-fi teen romance has some plot and character problems. 3 Stars

A sci-fi teen romance with lots of heart but gaping plot and characterization holes, Peter Chelsom’s The Space Between Us entertains in spite of its many problems.

A sci-fi teen romance with lots of heart but gaping plot and characterization holes, Peter Chelsom’s The Space Between Us entertains in spite of its many problems. A medium-sized budget has been put to astounding use with eye-catching and heart-stopping visuals, and one will probably like it better if he simply shuts off his brain and lets the movie work on its own simplistic terms.

Gardner Elliot (Asa Butterfield), the first human born on Mars, begins an online friendship with Tulsa (Britt Robertson), a lonely teen in Denver, Colorado. Though his identity has been kept a secret to the people of Earth due to his astronaut mother’s (Janet Montgomery) unplanned pregnancy, the head of the Genesis Space Project Nathaniel Shepherd (Gary Oldman) allows the teen to make a voyage to Earth, and the sixteen-year-old finally gets to experience all the joys and wonders of a world he could only read about. Problems arise when scientists discover that Gardner’s organs can’t withstand the Earth’s gravity and atmosphere for very long. With this information being kept from him, Gardner escapes from his room and once meeting with Tulsa in the flesh, the pair go the run, Gardner determined to find the father he’d never known with just a few clues to go on: an engraved ring of his mother’s and a photograph of her with a man who greatly resembles Gardner.

The screenplay by Allan Loeb based on a story he concocted with Stewart Schill and producer Richard Barton Lewis breaks into three definite acts: Gardner’s lonely existence on Mars with no one his own age to talk to other than a chat friend on Earth and only a robot (voiced by director Peter Chelsom) and a female scientist Kendra Wyndham (Carla Gugino) who has served as his guardian as companions on Mars, Gardner’s journey to Earth and exploration of its wonders with Tulsa as they search for his father, and the tracking of the runaway teens and the attempts to save him as his body begins to fail him. The latter is never far from the viewer’s thoughts as we know Gardner is a ticking time bomb who begins to look progressively worse as the film runs (to two hours; overlong and a sojourn to Las Vegas where Gardner derides the phoniness of what he sees compared to the natural grandeur of the Mother Nature could easily have been cut). The best thing about the film’s middle portion is watching the innocent and inexperienced Gardner experience Earth for the first time, his point of view shots seeing vivid blue skies and seas, fields of waving grain, and all the colors of the rainbow allowing us to see our very familiar world through fresh eyes (there’s also the blush of Gardner’s first sexual encounter in the golden glow of a campfire). But in order to make their journey from Colorado to California, the teens steal a succession of cars (no signs of any state patrolmen on their tails) after escaping from Kendra and Nathaniel in a crop dusting plane (which summarily crashes but leaves them without a scratch). Throughout, several characters make bone-headed decisions that make no common sense but only serve to keep the manipulative plot churning forward, and the ending defies all logic: when Gardner was first born, Nathaniel back on Earth plans to fly to Mars, but he’s told a brain disorder makes space travel impossible, yet sixteen years later, there are no objections raised when he flies to Mars to start life anew there?

Top-billed Gary Oldman does what he can with a poorly written character, but it’s really Asa Butterfield’s film from beginning to end portraying the gangling visitor from Mars as an authentic alien to our planet down to an unbalanced, stilted kind of walking as he adjusts to Earth’s heavier gravity. Britt Robertson seems older than the role she’s playing, but she’s one tough cookie all through the movie and comes to genuinely care for this awkward teen who’s completely infatuated with her. Carla Gugino’s character isn’t very well developed either, but that’s not the fault of the actress who plays it straightforwardly and with some heart. BD Wong as Nathaniel’s top advisor has a decent-sized role and does fine with it.

The film’s 2.40:1 theatrical aspect ratio is faithfully represented in this 1080p transfer using the AVC codec. Sharpness is excellent, and color is vivid and quite dynamic with realistic skin tones. Black levels aren’t always consistently deep (the opening star field is considerably lighter compared to the letterbox bar above it), but the overall image quality is very, very good. Contrast has been consistently rendered. The movie has been divided into 20 chapters.

The DTS-HD Master Audio 7.1 sound mix makes very good use of its available channels. Dialogue has been well recorded and has been placed in the center channel. The background score by Andrew Lockington and pop songs by the likes of Ingrid Michaelson and James Bay get wonderful extensions through the fronts and rears, and atmospheric effects likewise get split surround placement for optimum results.

Audio Commentary: director Peter Chelsom contributes an optimistic commentary track mentioning lots of background information on the film’s casting and production and heaping praise on all of his collaborators.

Alternate Ending (3:01, HD): the one in the film works better for the storytelling.

Deleted Scenes (13:44, HD): five scenes may be watched individually or in montage.

Promo Trailers (HD): The Bye Bye Man, Before I Fall, The Resurrection of Gavin Stone, and A Dog’s Purpose.

One of those teen stories about impossible romance enlivened by its science fiction elements and some unique views of America’s heartland and West Coast, The Space Between Us is a tolerable date night movie for undiscerning viewers. The Blu-ray release does feature excellent video quality and outstanding audio elements to provide a pleasurable experience for those interested.

I thought its main problem is that it wasn't entertaining!

Thanks for the review, Matt. This one looks good to me, though truth be told, I am perhaps most interested in hearing the score - it's from a composer I have recently been collecting scores from and am a fan

Asa Butterfield and Britt Robertson acted the hell of this, while Gary Oldman and Carla Gugino did what they could with the little they had to work with.

But the worldbuilding was half baked, never extending further than what the plot required, and the screenplay worked against the entire cast the whole way through. There wasn't a single scene with naturalistic dialogue. I never stopped feeling like I was listening to written words being performed. There was enough in this I did like to make me wish the rest of it was better.
You must log in or register to reply here.
Share:
Facebook Twitter Reddit Pinterest Tumblr WhatsApp Email Link 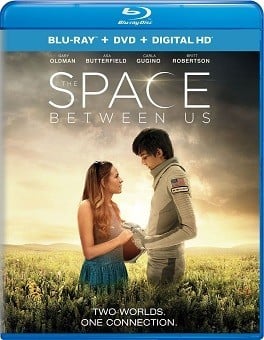