Boots Riley’s Sorry to Bother You is one of the most original and delightfully clever films in years. It’s a searing satire with unflinchingly good performances and an energy and bouts of narrative bravery that make the whole affair unforgettable. Some will balk at the surrealism, some may miss the importance of what Riley is saying about race and class (the nuances between the more overt statements, at least,) but no-one could possibly come away from this film without an appreciation the assured hand behind his directorial debut.

“Cash, I’m gonna make you a proposal. I can see that you’d wanna say no, but I wouldn’t do that before you see what I’m offering you.”

Cassius ‘Cash’ Green needs a job. Applying for a position with a telemarketing firm, he struggles to make an impact. When he gets some sage advice from a fellow telemarketer-a magical secret or sorts-his fortunes change and he begins a stratospheric rise in the ranks of the company, and enjoys an unprecedented ascendency into the mysterious power machine behind the call center. What he gives up to achieve success imperils his relationships and begins to question what he sacrificed to ‘make it.’

Sorry to Bother You is a bold film, an effective, eclectic, unendingly entertaining and meaningful statement of a film. It’s clearly a treatise on the importance of worker’s rights and the complex politics of being black in America, with commentary on code-switching, the soullessness of greed, and the challenge of becoming successful without losing one’s soul (and any decent person who works in corporate America can appreciate that struggle). With bold and subversive commentary on the struggle of being black in the power structure, and the tightrope and peril of assimilation, there’s a lot to digest even as the film begins its exploration of bigger paradigms with a unique style. Its off-the-wall moments invoke, for me, just a little of Monty Python’s ‘left-field’ within a more structured narrative arc, and it is fun and earnest.

There’s a surrealist vein running throughout, showing itself in bursts that bring the film a delighting sense and is head-scratching enough to bring a smile and have you sit up closer to see where on earth the movie could possibly be going. That kind of surprise, always grounded in this slightly adjusted real-world, with authentic characters and conversations (mostly), make this film stand all the way out from the crowd. Boots Riley proves himself with this maiden directorial effort that he’s a voice with a vision to watch out for.

And what a cast. Lakeith Stanfield is perfectly suited for Cassius Green that it’s hard to imagine anyone else in the role (and he reportedly took the role at the recommendation of his Atlanta co-star, Donald Glover, who had to back out due to Solo reshoots). He brings a curiosity and vulnerability to ‘Cash’ that makes you feel for his hustle and worry for his soul when he loses sight of his true character. The blindingly good Tessa Thompson as Detroit, Cash’s understanding artist girlfriend, is impeccable. An actress of such range and skill, Thompson, it seems, can do or become anyone. Armie Hammer turns in a terrific performance as the unscrupulous Steve Lift, selling a bizarre modern day slavery as a benefit to humanity, and supporting players like Jermaine Fowler’s Salvador, Omari Hardwick’s Mr. _____, Terry Crews’ Sergio, Steven Yeun’s Squeeze, and Danny Glover’s Langston, are all delightfully good.

Rapper and activist Boot’s Riley made his directorial and screenwriting debut with Sorry to Bother You, and my goodness, what a debut. There’s a scrappy quality, perhaps the trademark of a debut, which at times feels purposeful and artistically important to the film’s aesthetic and tone. There’s an assuredness in Riley’s exploration of his ideas of working class power and the fight against unrepentant capitalist greed (or capitalism disabused of morality). What we have, as we contend with the ideas and the bursts of bizarre, is a fantastic mix of the surreal with the painfully real, and the funny with the genuinely relatable. It all effortlessly explores culturally relevant conversation with a surprising blend of absurdism and statement-making. It won’t resonate with everyone, but for those that it does, it will be an unforgettable experience.

Framed at 2.39:1, Sorry to Bother You is a lovely looking Blu-ray, with deeply saturated colors. Reportedly filmed using the Alexa Mini, director of photography Doug Emmett makes intriguing use of light, bold colors in scenes contrasted with more neutral, cooler views for the wealthier strata of director Riley’s universe. There are scenes with a terrific level of detail, from skin pores to fabric and materials that are a delight. Without offering up spoilers, some of the special make-up effects work, full body, are more fake-looking (perhaps by design) in part from the high level of detail, but it doesn’t detract from the impact of what we’re seeing.

Fox delivers Sorry with an effective DTS-HD 5.1 Master Audio that has it where it counts. A very good use of music throughout, the audio keeps up with good enveloping surround and deep bass at times. The dialogue is mostly found in the center channel and is well-balanced, and moments of related sound effects appear elsewhere, creating a sense of aural space and it works nicely. Busy bars, chaotic crowds, and uniting workers fill the fronts and the surrounds where needed without issue.

This film deserved a heck of a lot more special features to unpack its ideas, approaches, and accomplishments. What we have scratches the surface and begins with an almost 12 minute interview with the director where he describes the film as an “absurdist dark comedy with magical realism and science fiction inspired by the world of telemarking,” and that’s about the best summation of what this film is about. It’s a concise perspective on the ‘what’ and ‘why’ of the film, ideas expanded upon in the feature commentary. Boots Riley is a man in full command of what he wants to do and say while he hustles and figures out how to do and say it.

The other special features are very short (a minute or two) and are okay diversions.

The Cast of Sorry to Bother You

The Art of the White Voice

Boots Riley’s Sorry to Bother You is one of the most original and delightfully clever films in years. It’s a searing satire with unflinchingly good performances and an energy and bouts of narrative bravery that make the whole affair memorable. Some will balk at the surrealism, some may miss the importance of what Riley is saying about race and class (the nuances between the more obvious statements), but no-one could possibly come away from this film without an appreciation for Riley’s assured hand behind his directorial debut.

One of my favorite movies this year.
Reactions: Neil Middlemiss

What an absolutely stellar review for the best movie of the year. I sincerely hope this film is not forgotten at Oscars time!
Reactions: Jake Lipson, TravisR and Neil Middlemiss

Thanks for the review, Neil. This is one I will probably add to my collection after a price drop simply because there are too many major new releases coming out right now to get everything all at once. However, I really liked the film when I saw it in the theater and look forward to revisiting it on disc at some point.


Sam Posten said:
I sincerely hope this film is not forgotten at Oscars time!
Click to expand...

Unfortunately, I think the film is probably too out-of-the-box for the Academy, and if it gets recognized it will be in the form of a screenplay nomination and that's it. I'd love to be wrong, but that seems to be what happens with genre-bending original fare at the Oscars (Get Out, Eternal Sunshine of the Spotless Mind, etc.)

I am not going to be as giddy about this film as everyone else was.

Yes, absolutely, I was delightfully entertained while watching this film. Yes, I thought that it was one of the most unique films I had seen in a long time. Yes, it is absolutely worth seeing -- even blindly.

For me, this film went terribly wrong at one point.


The inclusion of "horse people"
Maybe there was a reason for doing what they did with this plotline, but it just felt that a piece of silly, unnecessary fantasy suddenly made its way into a brilliant film and I just could not connect to it.

I really wanted to like this one a lot more than I did. There are a lot of interesting things in it, but it's also very messy and sloppy. It feels like a first draft that was banged out in a week and never revised, or a promising student film. I enjoyed the somewhat similarly themed Black Klansman a lot more than this one.

Ronald Epstein said:
Maybe there was a reason for doing what they did with this plotline, but it just felt that a piece of silly, unnecessary fantasy suddenly made its way into a brilliant film and I just could not connect to it.
Click to expand...

Yes, there is. It is 'The Other'. Consider that you and I have lived our lives never knowing what it is like to be The Other in society while those of other races have. Introducing a NEW other is a wild card. One that provides:
-New perspectives for the existing majority and the minorities
-Potential for those IN the majority to be transformed to the Other
-The Minorities now have a NEW Minority to consider, one in which they are potentially going to be displaced by.

Most importantly is the FEAR of the new unknown.

This mindfuck is the whole point of STBY. Without it the film is just 'yeah it sucks being a minority, not a whole lot we can do about it other than pretend to be in the majority and/or organize and fight'. And both of those are valid strategies being used to good and bad effect in STBY. Danny Glover representing the first. Steve Yeun representing the second. Submission versus aggression.

By introducing a new other it gets ALL of us to notice that the struggle will always be there. If it's not skin color it will be something else. And the solution is not to adapt from being the oppressed to embracing being an oppressor but for ALL of us stand up for the rights of the minorities, whatever that selection criteria is.
Reactions: bujaki, Neil Middlemiss and TravisR
You must log in or register to reply here.
Share:
Facebook Twitter Reddit Pinterest Tumblr WhatsApp Email Link 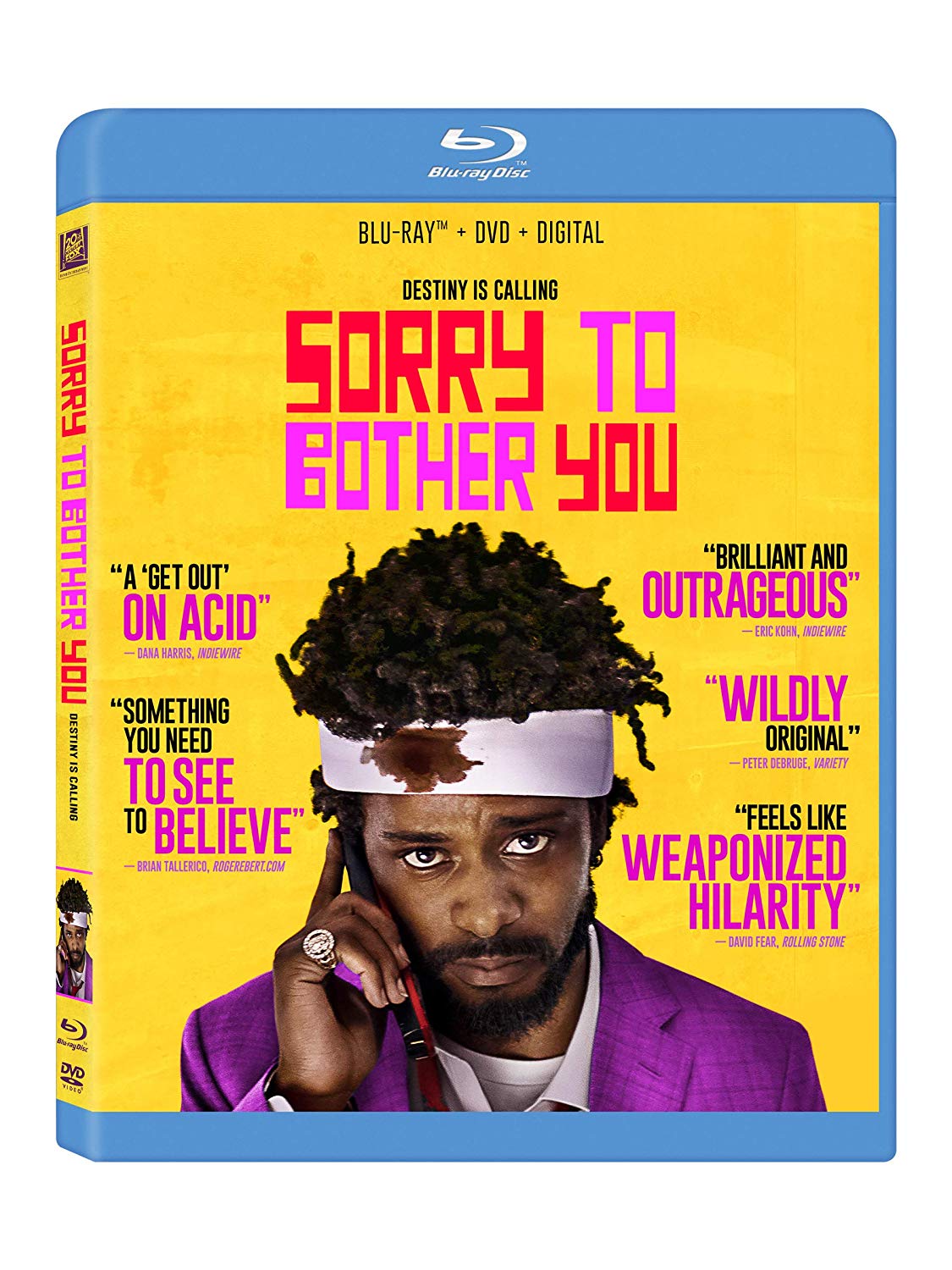