A wacky follow-up to one of Bob Hope’s funniest and most popular movies, Frank Tashlin’s Son of Paleface routes its own course through screwball antics and lots of sight gags emerging as probably Bob Hope’s best comedy of the 1950s.

A wacky follow-up to one of Bob Hope’s funniest and most popular movies, Frank Tashlin’s Son of Paleface routes its own course through screwball antics and lots of sight gags emerging as probably Bob Hope’s best comedy of the 1950s. With great co-stars to play opposite, a tune-filled score for all three leads to take part in, and even some action mixed with its off-the-wall humor, Son of Paleface is one of those delightful farces that rewards multiple viewings.

Finally graduating from Harvard, Junior Potter (Bob Hope) heads west to claim the allegedly vast inheritance of his father, the former dentist Painless Potter. But his father’s treasure chest is empty, and with the entire town up in arms over the massive bills Potter senior had accrued while alive, Potter must figure out some way to get some money, so he decides to woo the town’s wealthiest citizen, Mike Delroy (Jane Russell), the owner and leading showgirl of the Dirty Shame saloon. What Junior doesn’t know is that Mike is the wanted mastermind known as “The Torch,” the leader of a gang of thieves who have been robbing area banks and stagecoaches. So successful has her crew been that the government has sent out undercover agents Roy Barton (Roy Rogers) and Doc Lovejoy (Lloyd Corrigan) to trace the bandits and stop their robberies.

With director Frank Tashlin having written the earlier film The Paleface, it seems natural that he’d both co-write (with Robert L. Welch and Joseph Quillan) this sequel as well as direct it, and he brings with it his wild and wacky sense of comic staging and multiple gags gleaned from years of writing and directing animated films with some of the Hollywood’s biggest studios. Nothing is sacred in a Tashlin comedy meaning that the sky’s the limit with absurdity and outrageousness, even down to Bob Hope bedding down for the night with Roy’s horse Trigger and their squabbling over who gets the blanket. As with many Hope films of the era, breaking the fourth wall with asides to the audience along with cameos and mentions of Paramount personnel are rampant with Bing Crosby and Cecil B. DeMille making brief appearances and Hope dropping the names Martin and Lewis when two vultures attach themselves to the back seat of his roadster. But the Tashlin-directed gags are so hilariously plentiful: Hope suited up with lead weights sinks into a mud pit, Trigger chasing Hope up and down and through a hotel, Hope crashing through a series of hotel walls and then trampled on underneath by most of the cast, a looney mirage scene in the desert, and the climactic chase scene where aerodynamic laws mean nothing to a director of animated comedies. And the score’s a tonic, too, with a reprise of the Oscar-winning “Buttons and Bows” with all three stars, solos for Jane Russell (“Wing-Ding”) and Roy Rogers (“A Four-Legged Friend”) and Jane dueting with both Roy (“California Rose”) and Bob (“Am I in Love?” which was Oscar-nominated).

Bob Hope plays yet another variation on his cowardly egotist, but it works to perfection in this film, situating the tinhorn among tough hombres who could grind him into powder if they wanted. Jane Russell looks astounding both in and out (a bubble bath sequence is quite memorable; spoofed later on when Hope takes his own bubble bath) of her gowns, tights, and cowboy gear and expertly plays straight woman for Hope’s antics. Roy Rogers was an inspired addition to the cast, a straight arrow whom Hope can bounce satirical barbs off and never have to dodge any in return while having to joust with Trigger for every slight against his master. Paul E. Burns is the lovably grizzled old-timer who was Potter senior’s closest friend while Douglass Dumbrille as the town sheriff and Lloyd Corrigan as Roy’s undercover agent partner do fine in their small roles. Bill Williams as Mike’s henchman who’s also sweet on her and madly jealous of any man who comes near her might have been given a bit more to do. Iron Eyes Cody as Chief Yellow Cloud and Wee Willie Davis as the towering town blacksmith get a few precious moments in the spotlight.

The film’s original theatrical 1.37:1 aspect ratio is faithfully delivered in this 1080p transfer using the AVC codec. Sharpness is excellent, allowing us to see both numerous facial features on the stars in close-up and revealing their obvious stunt doubles used during some of the action sequences. The Technicolor is typical of Paramount’s rich, warm color palette of the era and very appealing. There are occasional bits of dirt and colored flecks, but they’re never distracting and are not in great supply. The movie has been divided into 8 chapters.

The DTS-HD Master Audio 2.0 mono sound mix offers better fidelity than one might expect for a film from this era. The songs and musical score are mixed nicely and carefully blended with the well-recorded dialogue and atmospheric effects. No prominent age-related artifacts like hiss, flutter, or crackle mar the listening experience.

Audio Commentary: film historian Greg Ford gives plentiful information on the lengthy career of Frank Tashlin in his comments though there are a fairly significant number of dead spots that might have been filled by giving us background information on some of the esteemed character actors who support the stars in the film like Bill Williams, Douglass Dumbrille, and Lloyd Corrigan.

The Lady Said No (8:15, HD): a 1946 stop-motion animated film directed by Frank Tashlin and now reconstructed from bits and pieces of available elements. Greg Ford also offers a running commentary for this short in addition to the main feature.

Hope Feature Montage (4:17, HD): excerpts from the Bob Hope feature films recently released by Kino Lorber on Blu-ray. They include My Favorite Brunette, The Lemon Drop Kid, Road to Rio, Road to Bali, and Son of Paleface.

Fans of Bob Hope, Jane Russell, or Roy Rogers will undoubtedly want to pick up Son of Paleface, one of the high water marks in each of their careers. The Kino Lorber Blu-ray offers very good sound and picture and is certainly recommended for purchase.

Well, if the images are in sharp focus and the color is rich, this disc is an essential purchase. Many thanks.
Reactions: Flashgear

Thanks, Matt. Great and well written review as always. I've always loved this film. Of all the songs that Roy did over the years, California Rose ranks among the best and the trio version of Buttons & Bows works very well.

It is almost impossible to watch the scene of Bob and Trigger in bed and not be amazed and laugh at the same time.

I ordered this, and the other Hope titles, during the recent Kino sale and anxiously await their arrival. The lack of SDH stinks so I'll have to use headphones for my evening viewing, but I love Hope so much that I broke my rule about not buying product without them.
Reactions: Flashgear and Matt Hough

This review brought back fond memories from my youth. I always liked Son of Paleface better than the original, possibly because I have no memory of seeing Paleface in the theater.Based on your review of the quality of this disk I will definitely order this RSN since I apparently missed it on the Kino Lorber sale.
Reactions: Flashgear

sidburyjr said:
This review brought back fond memories from my youth. I always liked Son of Paleface better than the original, possibly because I have no memory of seeing Paleface in the theater.Based on your review of the quality of this disk I will definitely order this RSN since I apparently missed it on the Kino Lorber sale.
Click to expand...

That chimes exactly with my own memories, seeing it as a theatrical reissue in the late '50s. Wonderfully entertaining film with so many great Hope gags.
Reactions: Flashgear

I certainly like it better than The Paleface though it was a big hit in its day. But Jane Russell has some experience under her belt by 1952 and Roy and Trigger make GREAT additions and spur many of the best comic bits.
Reactions: Will Krupp and Flashgear 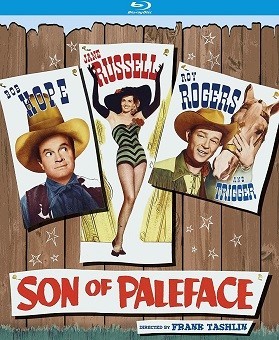