For those who didn’t get enough of the magical flubber and its eccentric inventor in Walt Disney’s hilarious The Absent-Minded Professor, the man and his inventions return in Son of Flubber, a typically weaker if nevertheless entertaining sequel to the earlier comedy.

For those who didn’t get enough of the magical flubber and its eccentric inventor in Walt Disney’s hilarious The Absent-Minded Professor, the man and his inventions return in Son of Flubber, a typically weaker if nevertheless entertaining sequel to the previous comedy. It’s no surprise Disney went back to the well on this one: the original was the second highest grossing film of its year, and the sequel did almost as well, understandable since it milked so many of the gags that worked so well the first time around in this second excursion into the lives of the faculty and students of Medfield College.

Expecting a financial windfall from his invention of flubber, Professor Ned Brainard (Fred MacMurray) is disappointed to learn of the mounds of red tape in Washington which will prevent any monetary payouts from the government for his invention, money that both he personally and his college Medfield were counting on. Now with town moneybags Alonzo Hawk (Keenan Wynn) about to foreclose on the college’s $350,000 default loan payment and the IRS breathing down Brainard’s neck, the desperate professor returns to the lab to develop an offshoot of flubber called “flubbergas,” a substance he believes can be harnessed to control the weather. Hawk’s rebellious college son Biff (Tommy Kirk) is also adapting flubbergas to aid the pitiful Medfield football team as they square off against the unbeaten state champions.

The script for the movie was penned by Bill Walsh and Don DaGradi and incorporates another array of farcical misfires with Brainard’s inventions including forming rainclouds in a kitchen and inside a car (the resultant deluge makes for some very funny sight gags) and a sequence of glass and mirror breakage on a very grand scale. And the professor’s floating Model-T is always a joy to see and hear puttering along among the clouds. Just as the first film’s highlight was a topsy-turvy basketball game in which flubber on the soles of Medfield’s players brought about a wild and wooly contest (and is repeated in some film clips midway through the movie in case there were some viewers who had missed the first film), the sequel unimaginatively applies the newest invention to a football game with similar (though less hilarious) results. The script, of course, doesn’t want us thinking too hard about its anomalies (the IRS claiming huge fees before monies have even been allocated; the Brainards serving a lavish dinner for several people when they can’t afford 50¢ to pay their paper boy; the professor hiding from the law by dressing as a Medfield football player in plain sight of the whole town), so director Robert Stevenson keeps things moving swiftly to slide over these rough patches. There isn’t much he can do with a tedious jealousy subplot (Brainard’s old flame Desiree de la Roche – Joanna Moore – comes sniffing around him again much to the consternation of wife Betsy played by Nancy Olson), and the professor’s antiquated insistence that his wife not take an English professor position despite their dire need for money lands this way of thinking strictly back at the mid- 20th century mark.

The film has been framed for Blu-ray at 1.66:1 and is presented in 1080p resolution using the AVC codec. Returning to its original black and white after some colorized home video releases, the image is very sharp and clear with the original grain structure of the film completely intact. There isn’t a trace of age-related artifacts here, and the grayscale is most impressive with especially rich black levels. The movie has been divided into 12 chapters.

The disc offers the sound mix as Dolby Digital 2.0 mono, decoded by Dolby Prologic into the center channel. The dialogue is clear and precise and has been combined most professionally with George Bruns’ jaunty background score and the various sound effects appropriate to the storytelling. No age-related problems with hiss, crackle, or flutter are present.

There are no bonus features included with this Disney Movie Club exclusive release.

Son of Flubber might not have the comic freshness that made The Absent-Minded Professor so memorable, but in its own right it’s a pleasant, enjoyable family comedy which should delight innocents of all ages. This movie is offered as part of the Disney Movie Club (www.DisneyMovieClub.com) though you can certainly find it offered for sale with varying premium prices at Amazon (see below) and through other marketplace sellers.

Great review! I agree with both your assessment of the film itself and the disc. I'm glad to have it (was a blind buy) but didn't seem like an essential movie either. It was fun but not as good as the original.
Reactions: Matt Hough

Well, gosh. Another film from my misspent youth. If only I had the room to put all these titles.

Objectively, I think of Absent Minded as the better film, but I saw this one first, so it has a warm spot in my heart. Also, I saw it on a double feature with 20000 Leagues with my Dad and Uncle for a rare "Boys Night Out" so it carries that great memory with it as well. I am glad it received a good blu and I can't wait to watch it.

Coincidentally I saw this few weeks back for the first time. The original is a classic and this one is very inferior to the original movie.

I love that Disney is releasing all of these in 1.66:1 ratio. I feel like we are getting the full frame on most of these. This looks very good and I was impressed with how good the film actually is. I thoroughly enjoyed it almost as much as the original. But once again, Disney sadly releases all of these bare-bones with no bonus content.
You must log in or register to reply here.
Share:
Facebook Twitter Reddit Pinterest Tumblr WhatsApp Email Link 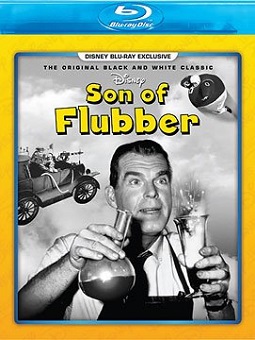