Forum List What's new Dark Style Change width
Log in Register
What's new Search
Menu
Log in
Register
Navigation
Install the app
More options
Dark Style
Close Menu
Posted on March 7, 2021 by t1g3r5fan
You are using an out of date browser. It may not display this or other websites correctly.
You should upgrade or use an alternative browser.
Gaslight noir debuts on Blu-ray 4 Stars

After cutting his teeth as a director working on Broadway, Lewis Allen was brought to Hollywood by Paramount Pictures in 1941. He got his first big break – after paying his dues working in various roles like dialogue director and directing a WWII propaganda short – as a feature film director with The Uninvited (1944), which has become a classic in the horror genre; reuniting with that film’s star, Ray Milland, Allen returned to his native England in 1948 to film So Evil My Love, an entry in the “gaslight noir” subgenre. Previously released by Universal (the current rights holder) on MOD DVD as part of their Vault Series, Kino has licensed the film for its Blu-ray debut.

On a ship bound for England from the West Indies, Olivia Harwood (Ann Todd) – a missionary’s widow – meets the mysterious Mark Bellis (Ray Milland) while nursing him back to health from malaria. Upon arriving in Liverpool, Olivia is persuaded by Mark to let him live with her in the boarding house she inherited. Over time, it’s revealed that Mark is a con man whose previous escapades as an art thief and forger have come up empty; when Olivia is hired as a live in companion to her former schoolfriend Susan Courtney (Geraldine Fitzgerald), Mark persuades her into stealing the stocks and bonds from the household. However, it’s when a bundle of letters containing Susan’s admissions of romantic interludes outside of her marriage amid other morally questionable behavior is when Olivia is dragged further into a deepening web of blackmail, betrayal, and eventually murder.

Coming in following the success of Gaslight (1944), So Evil My Love is one of the best entries in the subgenre of “gaslight noir” that inevitably arose. Under the direction of Lewis Allen, the film bristles with tension as its plot really unfolds upon Olivia’s budding romance with Mark as they become more deeply involved. All of this is more interesting because it was loosely based off of real life events; the mysterious death of British barrister Charles Bravo in 1876 and the 1905 murder of Cesar Young are referenced in two of the climatic moments in the movie. If there’s only one flaw about the movie itself, it’s that the pacing is a bit sluggish given that some scenes are a bit burdened with extra talk. Other than that, So Evil My Love is still a very good example of the melding of elements of a Victorian England period piece with the stark and cynical nature of the film noir; in short, the movie delivers on the goods more often than not.

Top billed Ray Milland has a solid performance as the duplicitous Mark; Milland’s remarkable ease at playing the cad would lend itself brilliantly the next year when he appeared in Alias Nick Beal (1949). In just her second Hollywood movie following the Alfred Hitchcock/David O. Selznick production The Paradine Case (1947), Ann Todd has the best performance in the movie as the woman who finds herself too willing to degrade herself for the man she loves; she returned to England shortly after this movie and married director David Lean, appearing in his movies The Passionate Friends (1949), Madeleine (1950) and The Sound Barrier (1952). Geraldine Fitzgerald makes a memorable impression as the neurotic Susan, a target of both her husband Henry’s controlling nature and Mark’s conniving of Olivia; Raymond Huntley memorably incarnates the sneering and rigid Henry with an air of the pretentious. Rounding out the cast here are Leo G. Carroll as a private investigator, Martita Hunt as Henry’s mother, Moira Lister as the other woman in Mark’s life, Raymond Lovell as Mark’s partner in crime in the ill advised art theft scheme, Finlay Currie as the doctor and Hugh Griffith as the coroner, both of whom factor into the climatic twist in the movie.

The film is presented in its original 1:37:1 aspect ratio, taken from a brand new 2K transfer prepared for this release. Film grain is organic with gray scale and fine details given a faithful representation; there’s definitely some vertical lines, scratches and dirt present here – likely owing to the state of the elements used for the transfer – but nothing that would make the film unwatchable. Overall, this is likely the best the movie will ever look on home video.

The film’s original mono soundtrack is presented on a DTS-HD Master Audio track for this release. Dialogue is both strong and clear, with the sound mix and music score (composed by William Alwyn with additional contributions by Victor Young) also given equally faithful representation as well. There’s minimal problems like popping, crackling and hissing present here, which means that this is likely the best the movie will ever sound on home video.

Commentary by film historian Imogen Sara Smith – Newly recorded for this release, Smith talks about the film’s production, its cast and crew as well as the subgenre of “gaslight noir” in general.

While the film didn’t generate much interest in the box office upon initial release, So Evil My Love is still a hidden gem of a noir that’s worth a second look. Kino has done another solid job here, with a decent HD transfer and a very informative commentary track as a special feature. Highly recommended and worth upgrading from the MOD DVD.

I've looked at this a couple of times as a blind purchase. Will add it to my list to pick up in the future.

Thanks for your review, the BD has been sitting on my home office desk since its release date. Hopefully, I'll get to it in the near future as I will watch it twice because listening to a Imogen Sara Smith commentary is a requirement for me.
You must log in or register to reply here. 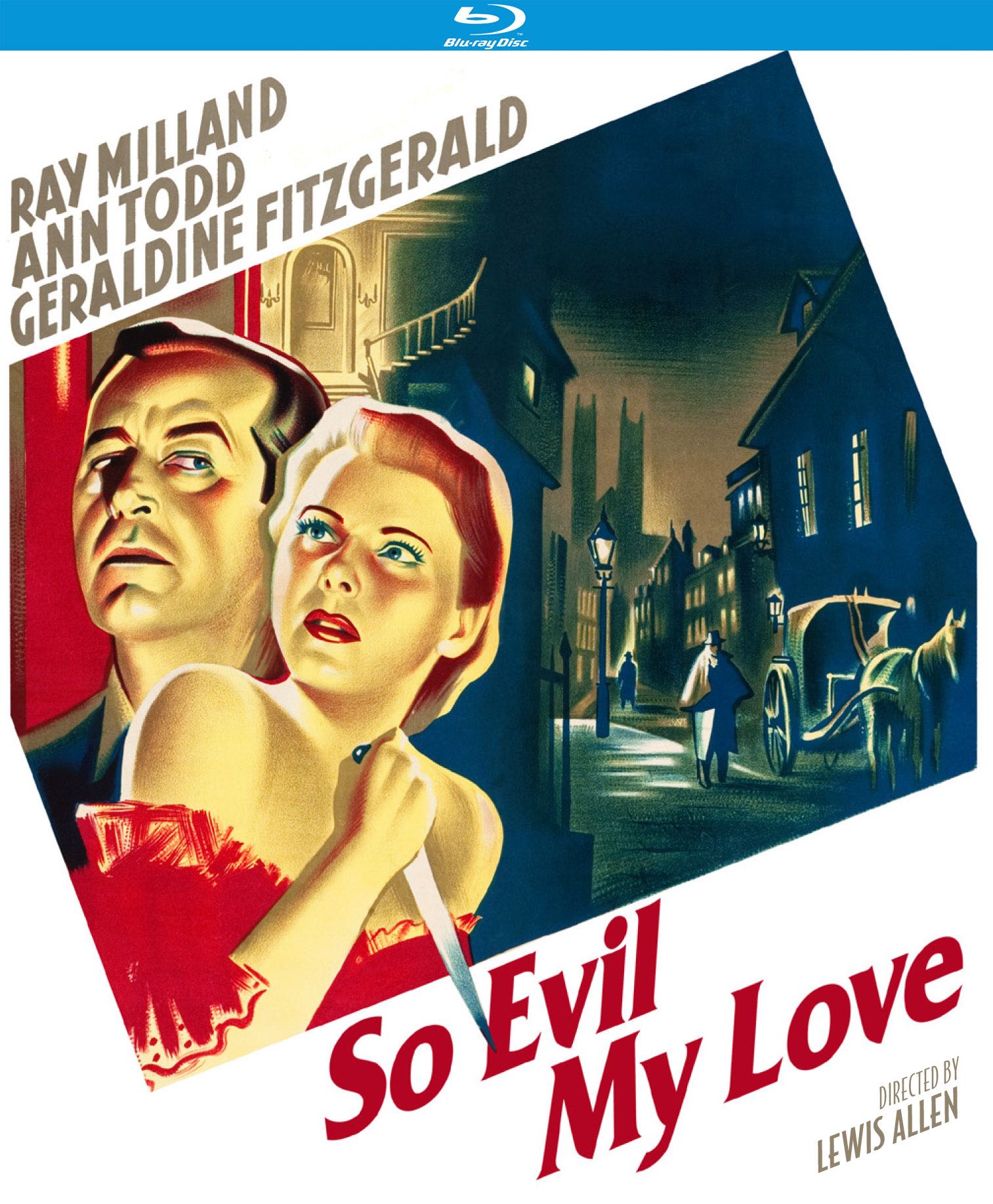