Posted on December 23, 2016 by Matt Hough
Watchable if a tad less dynamic docudrama on the notorious whistleblower 3.5 Stars

One of America’s foremost directors of docudramas, particularly those with a political bent, Oliver Stone’s most recent foray into the genre is Snowden, a dramatic look into surveillance whistleblower Edward Snowden’s decade-long career in various agencies witnessing the using and abusing of the power of the internet in means which he found repellant.

One of America’s foremost directors of docudramas, particularly those with a political bent, Oliver Stone’s most recent foray into the genre is Snowden, a dramatic look into surveillance whistleblower Edward Snowden’s decade-long career in various agencies witnessing the using and abusing of the power of the internet in means which he found repellant. While director Stone doesn’t quite wring the same kind of dramatic intensity out of Snowden’s story as he did with the subjects in Born on the Fourth of July, JFK, and Nixon, he certainly manages to offer a reasonably balanced account of the man’s point of view combined with the director’s legendarily bombastic visual style to make the movie imminently watchable.

On the eve in 2013 of his first public release of damning information against American surveillance agencies for whom he had worked through documentary filmmaker Laura Poitras (Melissa Leo) and journalists Glenn Greenwald (Zachary Quinto) and Ewen MacAskill (Tom Wilkinson) of The Guardian, Edward Snowden (Joseph Gordon-Levitt) looks back on his decade of work with various CIA and NSA agencies which led him to his ultimate decision to spill what he know about injustices within the covert surveillance system. He remembers the topsy-turvy upheaval his confidential jobs had forced on his personal relationship with girl friend Lindsay Mills (Shailene Woodley) as he jumped to various posts in Geneva, Tokyo, and, ultimately, Hawaii before finally dealing with severe health issues and having seen enough to make him realize what he had to do to be able to continue living with himself. The immediate reaction to his revelations and his attempts to protect himself are also a part of the narrative.

In using the flashback approach to the storytelling, screenwriters Kieran Fitzgerald and Oliver Stone must of necessity interrupt their forward momentum on a regular basis to return to the (then) present 2013 setting in a Hong Kong hotel room as Snowden recounts his experiences to documentarian Poitras and the journalists and they negotiate with reporter Janine Gibson (Joely Richardson) for the first revelations to go public. With Snowden’s technospeak about his coding and programming skills beyond the grasp of most viewers, we have to rely on his less talented superiors to keep us in the loop about his work and his progress through the various agencies for whom he works. CIA instructors Hank Forrester (Nicholas Cage) and especially Corbin O’Brian (Rhys Ifans) take an early interest in his exceptional gifts as a programmer and thinker-outside-the-box with O’Brian becoming one of the most important of the older generation that he at first respects and then grows to mistrust. Director Stone uses lots of visual tricks to convey the complexity of the coding and the multiplicity of networks tapping into billions of different entry points into the lives of people around the world, but it becomes more immediate and human as Edward finds the surveillance hitting closer to home with girl friend Lindsay. Yes, try as he might with even a sex scene thrown into the mix, Stone can’t quite make the ups-and-downs of their relationship interesting or less clichéd (how many films featuring undercover operatives find the significant other complaining about not being in the know about the lover’s work life), but Snowden’s constant fear of his life being surveilled reads brilliantly across actor Joseph Gordon-Levitt’s face and in the body language as the young man’s recessive epilepsy rears its head and helps us understand why he inevitably did what he did.

Joseph Gordon-Levitt does his usual terrific transformation into another person as Edward Snowden (his voice timbre is altered by the actor in a most expressive way). He’s easy to believe as the youthful, brilliant analyst (and in a neat trick, Stone switches out Gordon-Levitt with the real Edward Snowden in the film’s closing interview scene). As his most important adult influence at the CIA, Rhys Ifans is also memorable as the soft spoken but determined mentor. Along the way, other agency co-workers played by Timothy Olyphant, Scott Eastwood, and Ben Schnetzer make fine impressions of their various characters. Melissa Leo, Zachary Quinto, and Tom Wilkinson also score nicely as the people Snowden shares his story with. Shailene Woodley does a good job with a well-worn, not particularly well written character of girl friend Lindsay Mills.

The film’s theatrical aspect ratio of 2.40:1 is faithfully reproduced in this 1080p transfer using the AVC codec. Stone mixes multimedia platforms in telling his story, and these various media are represented nicely on screen with low resolution and desaturated color when in use. Otherwise, sharpness is outstanding and color rich and full with realistic skin tones. Contrast has likewise been nicely applied for a consistent picture. The movie has been divided into 20 chapters.

The DTS-HD Master Audio 5.1 sound mix is a professional one but one that doesn’t have quite the spirited kick of the visuals. Dialogue has been excellently recorded and appears in the center channel. The background music score by Craig Armstrong and Adam Peters has been used rather sparingly, and atmospheric effects don’t have the sophisticated placement through the soundfield that one expects from a first-rate studio production.

Deleted Scenes (8:51, HD): five scenes may be watched separately or in montage.

Finding the Truth (3:57, HD): a brief promotional featurette with soundbites about the production from writer-director Oliver Stone and stars Joseph Gordon-Levitt and Shailene Woodley.

Snowden: Q&A (41:00, HD): moderator Matt Seitz welcomes the real Edward Snowden (via internet connection from Russia) and the film’s Oliver Stone, Joseph Gordon-Levitt and Shailene Woodley to ask some intelligent questions from him about the real life story and its picturization. Some Twitter questions are also posed to the panel.

For those who haven’t seen the Oscar-winning Laura Poitras’ documentary Citizenfour, Oliver Stone’s Snowden allows the man’s story to be told in docudrama style by a sterling cast of actors and a fine director. While the dynamism which can be found in earlier works of Oliver Stone is somewhat missing here, it’s still an imminently watchable account from the subject’s point of view and is well worth seeing. 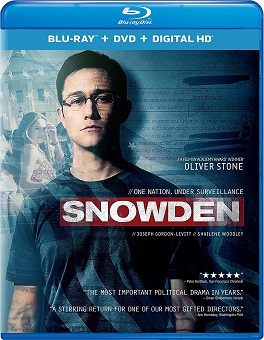