Snoopy may be America’s most beloved beagle, but he’s in for some rude awakenings during his various misadventures in Bill Melendez’s Snoopy, Come Home.

Snoopy may be America’s most beloved beagle, but he’s in for some rude awakenings during his various misadventures in Bill Melendez’s Snoopy, Come Home. The second of the animated Peanuts features, this one plops the enterprising pup front and center in a story of loss and renewal in which the regular gang serves as decidedly supporting characters as Snoopy and buddy Woodstock must make some crucial decisions concerning his life and his future.

Feeling unquestionably unappreciated after taking a tongue-lashing from Charlie Brown (Chad Webber), getting in a bitter tussle with Linus (Stephen Shea) about his blanket, and having poor loser Lucy (Robin Kohn) seek revenge after he bests her in a boxing match, Snoopy (noises by director Bill Melendez) takes an opportunity to visit his first owner Lila (Johanna Baer) in the hospital after he receives a loving letter from her. After he’s gone, the gang all feels guilty for not letting Snoopy know how much he is valued by them, but Snoopy himself has a major decision to make about whom he wants as his owner.

Charles Schulz made a conscious decision that he wanted this second feature film to be completely different from the first one and from the TV specials. So, that meant no Vince Guaraldi jazz score, no Schroder (David Carey) Beethoven sonatas, no baseball game, no football (non) kicking, no psychiatrist booth, no Red Baron: just the characters (mostly Snoopy and Woodstock) front and center. But what we learn from this experiment is that Snoopy functions better as a scene stealer of other people’s stories rather than the central character in his own tale. His picaresque is filled with (for him) high adventure: rafting, camping out, even abduction by a smothering little girl (Linda Ercoli) who bathes him frequently, dresses him in women’s clothes for her tea parties, and keeps him roped up in the backyard. But these embarrassments aren’t especially amusing. And for songs, the Sherman brothers Richard and Robert were enlisted to provide commentary tunes to reflect the events and emotions on screen: “At the Beach” when Snoopy and Peppermint Patty (Chris De Faria) connect, “No Dogs Allowed” which haunts the pup throughout the movie as he comes to understand the many places dogs aren’t welcome, “Me and You” celebrating the bromance between the pooch and the bird, “Fundamental Friend Ability” as he endures the torturous temporary ownership of Clara, and “Changes” which heightens Charlie Brown’s sad realization that Snoopy has gone. Lila has the one song which puts the score closest to that of a real musical “Don’t You Remember Me?” but in the main, the tunes, while perfectly pleasant and fitting for the scenes where they appear, subtract the one thing that the Peanuts TV specials have in spades: the cool factor.

The new voices used for the Peanuts crew are all serviceable without being definitive. Stephen Shea comes closest to matching his brother’s previous cadences as Linus, and Robin Kohn is an agreeably brusque Lucy, but Chad Webber’s Charlie Brown seems less neurotic than other Charlies in the past. After playing Pig Pen in the previous movie, Chris De Faria does just fine as Peppermint Patty, and new characters Lila and Clara are appropriately voiced by Johanna Baer and Linda Ercoli.

Once again, CBS has given us an open matte 4:3 presentation on video in 1080p resolution using the AVC codec. Incomprehensibly, however, the opening and closing credits are windowboxed making for a peculiar looking rectangle surrounded by black to open and close the film. (The image zooms just fine to 1.66:1, by the way.) A great deal cleaner than A Boy Named Charlie Brown, there are only a few dust specks here and there, and no scratches or spotting of note. Color is again quite solid throughout without any blooming, and there is no banding present. Sharpness is usually very fine, but there are occasional scenes where a bit of shimmer or softness is present. The movie has been divided into 12 chapters.

The disc offers both DTS-HD Master Audio 5.1 and Dolby Digital 2.0 stereo sound mixes. As with A Boy Named Charlie Brown, the lossy Dolby Digital stereo mix gives a better audio experience with fuller presentation and a more balanced mix between voices, the Sherman Brothers’ songs, and the occasional sound effect. The lossless surround mix doesn’t pay much attention to the rear channels.

Snoopy, Come Home offers a singular opportunity for Snoopy to be the top-billed star of a Peanuts movie, but while the experiment is unquestionably entertaining, many of the familiar tropes are missed, and there’s a feeling throughout that something vital to the otherworldly charm of these beloved characters is somewhat lacking this time out. 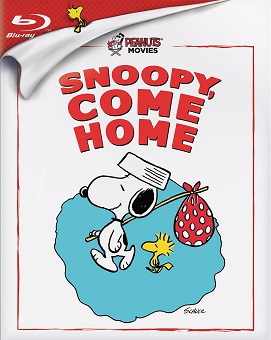