Forum List What's new Dark Style Change width
Log in Register
What's new Search
Menu
Log in
Register
Navigation
Install the app
More options
Dark Style
Close Menu
Posted on July 6, 2017 by Matt Hough
You are using an out of date browser. It may not display this or other websites correctly.
You should upgrade or use an alternative browser.
Effective suspense drama with action elements 3.5 Stars

Less an action movie than a dramatic suspense picture with action elements, Snitch shows the continuing maturation of Dwayne Johnson as an actor and focuses on an element in the criminal justice system that may have been heretofore unknown.

Dwayne Johnson gets to use his brain rather than his brawn in Ric Roman Waugh’s Snitch, and he comes out a winner. This taut little thriller based on a real life event negates Johnson’s hulking frame and casts him as an everyman struggling to save his son from a harsh prison sentence. Though there are a couple of subdued action sequences and an explosive climax, the main body of this work is personal and emotional asking the audience to put itself in the helpless place of this desperate father willing to do almost anything for his child.

When his son Jason (Rafi Gavron) is caught in a drug sting operation and falls victim to the current mandatory minimum laws which issue harsh prison terms (up to twenty years) for first time offenders, his father John Matthews (Dwayne Johnson) is willing to do anything to help his son’s sentence be reduced. Since Jason refuses to snitch on another peer who’s involved with drugs (which would have reduced his sentence to a year), John takes it on himself to broker a deal with the federal prosecutor Joanne Keeghan (Susan Sarandon) by offering to participate in a drug transaction that will bring the feds a major drug player Malik (Michael K. Williams). To help him gain entrance into the drug world, John calls on one of his construction employees Daniel James (Jon Bernthal), a two-time prisoner/now ex-con trying to live on the straight and narrow. When the first operation goes well enough to lure out a major regional drug cartel boss (Benjamin Bratt) who wants John working for him, Keeghan keeps John in play so she can make an even bigger score even though it will be putting John and his family’s life in a great deal of danger from the cartel.

The movie is a combination thriller and message film alerting the viewer to the unfair mandatory minimum laws being applied as harshly to first timers as they are to drug kingpins but wrapping its information in an emotional roller coaster with action and thriller elements. The script by director Ric Roman Waugh and Justin Haythe keeps things pretty taut and straightforward for all of the characters: these aren’t action heroes plunging in and wiping the streets with their muscular aggressiveness but rather average people involved in extraordinary events where their lives are in the balance every second. There’s a bit of a stumble late in the film when Daniel goes hunting for Malik that seems a bit too Hollywood for a film that’s been so grounded in reality heretofore, but most of the rest of the movie rings true with a vengeance. Of course, in a nod to the action movie crowd that makes up a great part of his fan base, Dwayne Johnson does become a part of the film’s major action sequence: an interstate shootout with drug cartel baddies in pursuing vehicles which climaxes the movie. And with director Waugh coming from the stunt world, it’s no surprise the sequence plays like gangbusters and seems real without a lot of added in CGI work to extend and ramp up the scene’s already ample suspense and violence.

Dwayne Johnson has become a very effective actor in films where his size and strength aren’t exploited. There’s not a false moment in his performance as a father willing to go to any lengths to help his son stay alive, and a wonderful scene later into the film when he’s remembering fun times with his kid as a youngster and his eyes well with tears shows how much of an accomplished actor he’s become as he balances dramas and comedies with his pure action stuff. No less effective is Jon Bernthal as another father striving to do right by his own family. As a two-time loser who knows a third arrest will earn him a life sentence, Bernthal imbues his Daniel James with the hopefulness of staying straight mixed with the desperation of trying to provide for his struggling family. Susan Sarandon is most successful as the conservative, demanding federal prosecutor, and Barry Pepper as her liaison to street operatives gives another sterling performance. Rafi Gavron is affecting as the high schooler caught up in something far more serious than he ever imagined, and Michael K. Williams is just as effective as a street drug thug has he was in HBO’s The Wire. Benjamin Bratt doesn’t get many scenes to develop a rounded character as drug kingpin El Topo, but he certainly exudes danger with his every utterance.

The film’s theatrical aspect ratio of 2.40:1 is faithfully rendered in a 2160p transfer using the HEVC codec. Sharpness in close-ups is really outstanding, and one can easily count the pores on the faces of the stars should he wish. Color has been drained a bit from the image giving the film a somewhat dispirited look which fits the movie’s mood perfectly. Flesh tones are more or less natural, but black levels even with the addition of HDR are merely okay. Where HDR does make a difference is in highlighting areas of shots where light plays a key role, whether it’s sunlight streaming through windows or overhead stadium lights turned on for nighttime drug deliveries. The film has been divided into 16 chapters.

The Dolby Atmos sound mix (decoded on my equipment to the Dolby TrueHD core 7.1 sound design) is well thought out with the big action set pieces filled with effective split effects like shot bullets that sometimes pan across and through the soundfield, and with Antonio Pinto’s moodily subtle score getting maximum exposure through the fronts and rears. The LFE channel is also used to advantage to reference scenes of impending danger, and, of course, in the big crashes which climax the movie. Dialogue has been well recorded and is mostly in the center channel though there is some very effective directionalized dialogue at certain key moments of the movie.

The bonus features are all contained on the UHD disc (though all are in 1080p rather than 2160p).

Audio Commentary: director Ric Roman Waugh does most of the talking in this track with occasional interjections by film editor Jonathan Chibnall.

Privileged Information: The Making of Snitch (49:40, HD): a three-part making of documentary featuring interviews with the cast and crew about the casting of the film, some production anecdotes, and the inspiration from a real-life case on mandatory minimums.

Deleted Scenes (5:39, HD): four scenes may be watched individually or together using “Play All.”

Less an action movie than a dramatic suspense picture with action elements, Snitch shows the continuing maturation of Dwayne Johnson as an actor and focuses on an element in the criminal justice system that may have been heretofore unknown. The UHD transfer is more consistently sharp than the Blu-ray transfer and is the recommended disc for viewing this film.

I agree with your review I watched the UHD the other day... One of the better Dwayne roles. The movie played much better then the first time I saw it.

Bought this for $12 blind at BB, will watch soon!
You must log in or register to reply here. 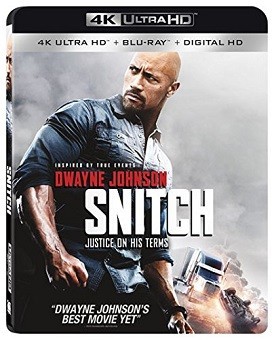