Posted on July 4, 2017 by Matt Hough
Fun animated adventure for the kids but not much here for adults 3 Stars

After two previous feature film adventures with the Smurfs interacting with human beings in the real world, Kelly Asbury’s Smurfs: The Lost Village returns the lovable blue creatures to their own habitat in their own self-contained adventure.

After two previous feature film adventures with the Smurfs interacting with human beings in the real world, Kelly Asbury’s Smurfs: The Lost Village returns the lovable blue creatures to their own habitat in their own self-contained adventure. It’s a very juvenilely-oriented feature aiming its targets at a very youthful audience who should find all the colorful thrills and spills for familiar and new characters quite engrossing. There is very little, sad to say, for a more mature audience.

One day in the forest with her pals Hefty (Joe Manganiello), Clumsy (Jack McBrayer), and Brainy (Danny Pudi) Smurf, Smurfette (Demi Lovato) captures a brief glimpse of a strange creature in the distance wearing a similar hat to their own except beige rather than white disappearing through a chink in a boundary wall. The entrance leads to the Forbidden Forest where Smurfs have been prohibited to go by Papa Smurf (Mandy Patinkin) since the evil wizard Gargamel (Rainn Wilson) resides there with his very astute cat Azrael (Frank Welker) and bumbling vulture Monty (Dee Bradley Baker) hoping for a chance to capture as many Smurfs as he can in order to siphon their powers for his own purposes. After learning that Gargamel is headed to a locale in the northeastern corner of the Forbidden Forest to destroy whatever is there, the four Smurf best friends head out to warn the inhabitants of the area that danger is coming. It’s a race against time as they pass Gargamel and learn a shocking secret about the inhabitants of this unexplored village.

Stacey Harman and Pamela Ribon do a fine job establishing exposition for newbies to the world of Smurfs in their screenplay before embarking on this juvenile adventure in which the four friends josh and jostle one another until reaching their goal. Along the way are some beautifully animated adventures in the Forbidden Forest including their initial assault by Venus flytrap-like flowers, eyeball plants, and dragonfly-like insects who are nice until one of their eggs gets stolen followed by an even more impressive whitewater rafting escapade which puts them directly opposed to the evil Gargamel. The secret village which the quartet finally discovers is the polar opposite of the original Smurf village: the newly discovered Smurfy Grove (spoiler alert!) is populated by all female Smurfs headed by SmurfWillow (Julia Roberts) with an aggressively butch SmurfStorm (Michelle Rodriguez) acting as the village’s spiky protector. It’s no surprise that Gargamel also eventually stumbles on the truth which turn the inhabitants of Smurfy Grove against our heroes for bringing him there (though, of course, he was on his way to discovering it on his own). While the narrative includes some thrills and tears, the discovery of the all female Smurfy Grove seems primarily predestined to provide relationship fodder for a sequel with the all male original Smurf village. Also included during the film are three production numbers: Smurfette’s “We Can Do Anything, the tear-filled funeral procession “Love Is All I Need,” and the climactic “I’m a Lady” which clearly emphasizes the girl power focus of this newest entry in Smurf lore.

Demi Lovato is a decent Smurfette, and Joe Manganiello, Danny Pudi, Jack McBrayer, and Mandy Patinkin all are just fine as the primary Smurfs in this adventure, and Julia Roberts, Ellie Kemper, Ariel Winter, and especially Michelle Rodriguez establish themselves nicely as new characters in this world, but it’s Rainn Wilson who has a field day with the evil Gargamel. Like Hank Azaria did playing Gargamel in the two live action predecessors to this movie, the wicked character gets all the choicest bits of comedy and mischievousness, and Wilson plays them to the hilt and then jumps over it unabashedly. If adults will find anything remotely amusing about this enterprise, it’s the character of Gargamel’s cat Azrael who’s always several steps ahead of his master in the discovery of information and planning for the future but who never gets the credit for his foresight at all.

The film’s theatrical aspect ratio of 1.85:1 is faithfully rendered in this 2160p transfer using the HEVC codec. Reference quality sharpness is evident, of course, in every frame with details in hair and beards notably obvious. Colors radiate with an intoxicating rainbow of hues all utterly under control but never with any trace of blooming and with no banding present in the picture either. Black levels are deep and rich, and the use of HDR brings out highlights in colors and scenes where daylight showers down on the characters. The movie has been divided into 16 chapters.

The Dolby Atmos sound mix (decoded to the Dolby TrueHD 7.1 core on my equipment) will keep the entire house awake with its loud and lively combination of dialogue, wall-to-wall music (score by Christopher Lennertz) and atmospheric effects which swoop and pan across and through the soundstage continually. Dialogue has been well recorded in the non-song portions of the mix though lyrics in a couple of the songs may be a tad hard to hear enveloped as they are by a large, expansive orchestra.

The UHD disc contains one bonus feature, an audio commentary (also on the Blu-ray disc) featuring director Kelly Asbury, his head of story Brandon Jeffords, and his animation supervisor Alan Hawkins. They share stories of aborted plot ideas and genuinely keep the tone light and conversational as they work their way through the movie.

The other bonus materials are contained on the enclosed Blu-ray disc:

Deleted Scenes (7:35, HD): four scenes may be viewed individually or in montage.

The Lost Auditions (4:14, HD): Ariel Winter, Michelle Rodriguez, Joe Manganiello, Rainn Wilson, Danny Pudi, and Jack McBrayer audition for roles in the film other than the ones they played.

Demi Lovato Meets Smurfette (1:01, HD): Smurfette briefly interviews Demi Lovato to ascertain her qualifications for playing her in the movie.

Lost Village Dance Along (3:10, HD): four dancers in split screen bust some moves to the tune of “I’m a Lady.”

Making the Song “You Will Always Find Me in Your Heart” (3:00, HD): composer Christopher Lennertz explains the genesis for the song in the film and his use of Shaley Smith as vocalist.

The Sound Of The Smurfs (3:44, HD): director Kelly Asbury and composer Christopher Lennertz discuss how they planned together how the music would sound for the movie which including the invention of some hand-made instruments to give the music a unique tone.

How to Draw Smurfs (7:42, HD): step-by-step instructions for drawing Smurfette, Brainy, and Clumsy. They may be viewed separately or together in one long lesson.

See More Smurfs (5:48, HD): trailers and ads for the two previous Smurf movies and three made-for-home video animated adventures. They may be viewed separately or in montage.

Smurfs: The Lost Village will likely delight the small fry around your house especially if they are already fans of the huggable blue creatures, but adults will find less here to enjoy. The UHD release of the movie is a blaze of colors and sounds which will assault your senses of sight and hearing from the moment the film begins. 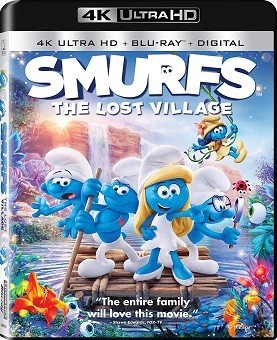