Forum List What's new Dark Style Change width
Log in Register
What's new Search
Menu
Log in
Register
Navigation
Install the app
More options
Dark Style
Close Menu
Posted on December 12, 2018 by Todd Erwin
You are using an out of date browser. It may not display this or other websites correctly.
You should upgrade or use an alternative browser.
Fun for the whole family 4 Stars

Smallfoot turns the Bigfoot (or more precisely, the Abominable Snowman) legend on its ear in this entertaining, family-friendly animated comedy musical from the director of Over the Hedge.

When a human crash lands his plane atop a mountain inhabited by Yetis, Migo (voiced by Chaning Tatum) takes it upon himself to prove to his community that smallfoots (humans) actually exist and that the world, as they know it, is about to change. But the community, lead by the Stonekeeper (voiced by Common), doesn’t like change, leading to Migo’s banishment. In searching for clues to the existence of humans, he comes across a group of outcasts, the S.E.S. (Smallfoot Evidentiary Society). Its leader, Meechee (voiced by Zendaya), who also happens to be the Stonekeeper’s daughter, convince Migo to travel down the mountain, beyond the clouds, and bring back a specimen. And that he does, in down on his luck nature show host Percy (voiced by James Corden), who has been hoping to find something so outrageous to drive up the ratings on his struggling show. This does not sit well with the Stonekeeper, who tries to prove that Migo is a fraud.

The movie’s underlying messages on tolerance, division, conformity, and the courage to question authority are strong enough to get through to most audiences without being too overly blatant or preachy. There is a great deal of humor in the film, much of it an homage to the classic Looney Tunes from Warner’s golden age of animation, and the popular music will likely appeal to both adults and children alike.

Warner’s 1080p AVC-encoded transfer retains the film’s original theatrical aspect ratio of 2.40:1, and is, in a word, fantastic. Colors are bold and vivid, with lots of pop where necessary. Detail is strong, from the small hairs of the Yeti characters blowing in the breeze to textures in the rock formations. Contrast is excellent, with deep blacks and crisp whites with no noticeable crushing or clipping.

This is the second Warner release on Blu-ray that I have reviewed that received a 7.1 theatrical mix but only gets a DTS-HD Master Audio 5.1 mix on Blu-ray. That being said, the 5.1 mix provided is very good with very active surrounds, such as wind and other fun sounds that pan seamlessly from front to back and vice versa, plus a nice wide front soundstage with excellent stereo separation. LFE is well utilized, assisting with the pounding footsteps of the behemoth Yetis and Mammoths in the film, as well as avalanches and plane crashes. Dialogue is clear and understandable throughout.

Yeti Set Go Sing-Along Edition (1080p; 96:20): The movie with sing-along on-screen lyrics and other trivia and activity hints. This is a separate encode of the movie at a slightly lower bitrate and with a Dolby Digital 5.1 track encoded at 640 kbps.

Migo in The Secret of the Yeti Stones (1080p; 3:43): This appears that it could be an alternate opening to the movie, as it is told almost exclusively in rough storyboard form.

DVD Copy: The movie in 480p and Dolby Digital 5.1 audio, plus the Yeti or Not, Here They Come! Imagining “Smallfoot” featurette.

JC Penney Portraits Coupon: Save $25 off your next purchase.

Smallfoot is a fun, family-friendly animated film, and Warner’s Blu-ray presentation has impressive video and audio, although it seems to be missing the 7.1 theatrical mix.

I cannot believe that Warner's own app, WB Movies All Access, has the movie cropped to 1.78:1.
You must log in or register to reply here. 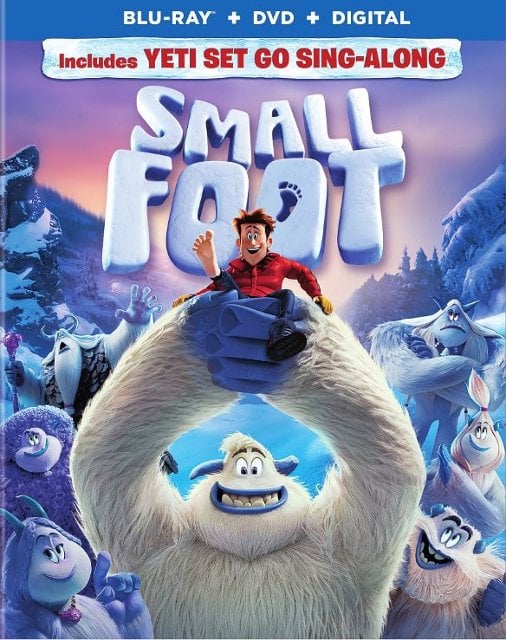