Forum List What's new Dark Style Change width
Log in Register
What's new Search
Menu
Log in
Register
Navigation
Install the app
More options
Dark Style
Close Menu
Posted on September 28, 2017 by Matt Hough
You are using an out of date browser. It may not display this or other websites correctly.
You should upgrade or use an alternative browser.
Some entertaining episodes amid the clutter 3 Stars

After four seasons of gradually ebbing ratings, Fox finally put an end to its supernatural thriller Sleepy Hollow but not before trying it on several different nights and in its last season moving its locale and adding a mostly new cast of supporting characters.

After four seasons of gradually ebbing ratings, Fox finally put an end to its supernatural thriller Sleepy Hollow but not before trying it on several different nights and in its last season moving its locale and adding a mostly new cast of supporting characters. Despite some fun adventures and a charismatic leading man, the series simply didn’t earn the kinds of ratings that would bring it back for a fifth season ending its run in the spring of 2017.

Resembling a cross between Supernatural, Warehouse 13, and the National Treasure films, Sleepy Hollow features the resurrected Revolutionary War soldier Ichabod Crane (Tom Mison) who has been brought back to life to combat supernaturally evil manifestations in the 21st century. For three seasons, his base of operations was Sleepy Hollow, New York, but after the death of his partner and fellow “Witness” (a supernatural stalker and defender of good) Abbie Mills (Nicole Beharie) at the end of season three, Crane journeys to Washington, D.C., seeking out a new Witness partner and operating out of a secret supernatural library and artifact center in the bowels of the Smithsonian known as The Vault. Its current librarians Jake Wells (Jerry MacKinnon) and Alex Norwood (Rachel Melvin) are mere pencil pushers before Crane’s arrival, but they quickly learn the ropes of field agents as they help pursue supernatural phenomena which they eventually learn are somehow attached to billionaire business magnate Malcolm Dreyfuss (Jeremy Davies). As Crane soon learns, his new Witness is an elementary school child Molly Thomas (Oona Yaffe), but her mother Diana (Janina Gavankar), an agent with Homeland Security, has no intention of letting her daughter be exposed to most of the horrors that doing the job requires. So, she frequently eschews her own job responsibilities to go off with Crane and the others to hunt down evil. Crane is also continuing to be assisted by Abbie’s sister Jenny (Lyndie Greenwood) who has her own vendetta against evil forces for killing her beloved sister.

Supernatural monsters abound in the thirteen-episode season four. Among them are three venomous witches, an Egyptian guardian demon, a demonic wolf, a combustion virus known as “fire flu,” a jinn (ancient word for genie), an id monster, a hunger demon, zombie Hessians, the Headless Horseman (which is brought down several times during the season but never entirely vanquished), and inevitably the Four Horsemen of the Apocalypse. The rise of these various creatures all tie into the pact with the devil which Malcolm Dreyfuss made granting him business success as long as he lives which Dreyfuss circumvents by tracking down the Philosopher’s Stone which will give him eternal life cheating Satan (played by Terrence Mann in the series finale episode) of his soul. Dreyfuss has at his command one of Satan’s most trusted demons to do his dirty work Jobe (Kamar de los Reyes), but even he soon wearies of Dreyfuss’ stumbles along the way toward immortality and inevitably becoming the world’s tyrant.

While individual episodes contain a fair share of thrills and adventure, the show basically falls apart near the end by the introduction of the future Molly Thomas renamed Lara (Seychelle Gabriel) who comes back in time (unexplained) to do her job as a Witness (freeing young actress Oona Yaffe from taking part in the many executions prevalent in the series) and prevent what her future self has seen as Ichabod’s dire fate. There is also the very confused and unsatisfying use of John Noble as Henry Parrish, the grown son of Ichabod Crane likewise resurrected in the future to gain revenge on his absent father killed during a 1781 battle of the Revolutionary War as part of George Washington’s (Mark Campbell) military unit. The series continually adapts history to the demands of its imaginative narrative and many names from the Revolutionary period are bandied about and sometimes shown in flashbacks.

The best thing about the series is actor Tom Mison’s eccentric and delightful performance as the 18th century Ichabod, plopped into the 21 century and completely ignorant of modern mores. He continues wearing his Revolutionary garb throughout the season, but when that beautifully sonorous voice begins speaking the lines, what he’s wearing makes little difference. Lyndie Greenwood is also uber-committed to the role of Jenny Mills and fares best among the ladies. Jerry MacKinnon and Rachel Melvin as the Vault librarians are used more often for comic relief than their action credentials, and while a tedious romance between them gradually comes to the fore by the finale (and obviously would have been a focus had the show been renewed for another season), it’s not usually intrusive into the unfolding drama. Janina Gavankar as protective mother Diana is effective, but the writers seem to forget through most of the season that she’s not supposed to be a substitute for her daughter thus violating their own rules for the necessity of Witnesses in their series. Fine actor Jeremy Davies, alas, tries way too hard to etch a weird season-long villain for the show, alternately overacting or hardly acting and contorting his body into such odd shapes as to be completely ludicrous most of the time. For lessons on how to be an effective and threatening villain, look no farther than Kamar de los Reyes’ Jobe who is masterfully commanding at all times and can steal a scene simply by standing still and glaring at his antagonists.

Here are the thirteen episodes contained on four DVDs in this fourth season set:

4 – The People vs. Ichabod Crane

The program’s 1.78:1 widescreen television aspect ratio is faithfully presented in these mostly excellent transfers which have been anamorphically enhanced for modern televisions. Sharpness is surprisingly strong for standard definition, and a good upconverting player can bring out a great deal of detail in faces and costuming. Color is strong and true with accurate flesh tones even though much of the show takes place in darker environments and at night. Black levels are excellent. In fact, apart from one rather soft and milkily contrasted episode (#5 “Blood from a Stone”) and a bit of moiré in some blinds in one episode, the transfers are free from standard definition artifacts. Each episode has been divided into 12 chapters.

The Dolby Digital 5.1 sound mix mimics the sound quality of the network broadcasts. Dialogue has been superbly recorded and has been placed mostly in the center channel with an occasional use of directional placement in various other available channels. The driving music score gets the full surround treatment, and atmospheric ambiance certainly extends to the fronts and rears when appropriate. Bass levels can be impressive as well on occasion.

Promo Trailers: This Is Us, Bones, Empire, Legion.

Fans of Sleepy Hollow were no doubt dismayed to see their show canceled at the end of its fourth season, but if the final episodes of the season were any indication, the writers did seem to be floundering a bit to keep fresh ideas flowing to keep the series going strong. The DVD release is a disappointment for those who were used to Blu-ray series releases, but a good upconverting player can be a grudging substitute for the lack of a Blu-ray release.

I liked the show initially, but the plots became too convoluted, and I abandoned it after a couple of seasons. Unfulfilled potential, I guess.
You must log in or register to reply here.

DVD Review This Is Us: The Complete First Season DVD Review 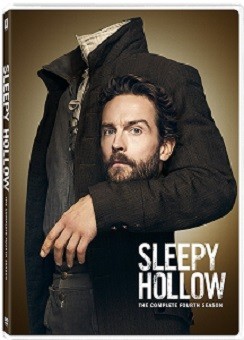