After losing his leg in a hostage rescue gone wrong, Will Sawyer (Dwayne Johnson) works as a security consultant, and has been hired to review the security on the world’s tallest skyscraper in Hong Kong, The Pearl, and has brought his family with him as a working vacation. As often happens in movies like this, after Will deems the building safe, the tablet he is carrying that allows him access to the security systems is stolen by a gang of thieves working for a crime boss, Kores Botha (Roland Møller), who has been trying to extort money from the building’s owner and chief architect, Zhao Long Ji (Chin Han). Zhao is in possession of a digital key that will incriminate Botha and the crime syndicates he works for, and apparently the only way he thinks he can get access to it is to shut down the security protocols and set the building on fire, and frame Will as an arsonist. Unfortunately, Will’s wife, Sarah (Neve Campbell) and their twin son and daughter are still in the building, trapped above the fire line. Can Will save both the building and his family?

The trailers for Skyscraper made it out to be a knock-off of the classic Die Hard, substituting Dwayne Johnson for Bruce Willis. The film ultimately feels like a cross between Die Hard and The Towering Inferno, and Johnson was definitely a good choice, often rising above the rather mundane and predictable material. We know far in advance that the hostage situation at the beginning of the film will be replayed in a different scenario, and we also know that it will happen in the ridiculous dome of mirrors atop the building. This is predictable, popcorn entertainment that is done rather well, despite the gaping holes in the script (my wife and I were constantly asking each other questions like what the motives of the bad guys were, are these thugs good guys or bad guys, etc.). If you turn your brain off for two hours, chances are you will probably enjoy Skyscraper.

Universal’s Blu-ray release features a 1080p AVC-encoded transfer that retains the film’s theatrical aspect ratio of 2.40:1. It’s pretty much what one would expect on Blu-ray of a modern blockbuster. Colors are bold and vivid for much of the film, shifting to a more orangish tone once the building is set ablaze. Detail is excellent, from facial features to fabric textures to textures in the wall coverings and flooring. Black levels are the Achilles heel, though, as blacks become a bit more grey as more and more CGI is used to fill in gaps in the set, but you really have to be looking for it.

Universal has graced Skyscraper with a Dolby Atmos track for its Blu-ray release, and wow, what a track. There is a lot going on in this film, and you can definitely hear it all around you. Fire blazing above, helicopters swirling around and above you, it is a true delight. LFE is strong, with roaring fire and explosions to rattle the floor boards. Dialogue, thankfully, remains clear and understandable throughout without getting drowned out by the abundance of active sound effects.

Inspiration (1080p; 4:12): A look at real-life amputee Jeff Glasbrenner, a consultant on the film that helped coach Johnson on his portrayal.

Opposing Forces (1080p; 2:35): A look at the training that actresses Neve Campbell and Hannah Quinlivan underwent to prepare for their roles.

Pineapple Pitch (1080p; 1:38): Dwayne Jhonson and writer-director Rawson Marshall Thurber tell a somewhat humorous story on how the movie was pitched to Johnson.

DVD Copy: The movie in 480p and Dolby Digital 5.1 audio, plus all of the special features mentioned above.

Skyscraper in an entertaining, leave your brain at the door, guilty pleasure, with a very good presentation on Blu-ray and an interesting set of special features.

I'll now definitely be picking this one up as a blind buy. I like Dwayne Johnson and I was hoping to hear the types of things you wrote about the movie being fun. I'm more than willing to "turn off my brain" for a couple hours. Some people would tell you I go around really often with it turned off!
Reactions: B-ROLL and Josh Steinberg

Thanks for the review Todd. I'd pass on this during its theatrical run and gave little thought to whether I should buy it on 4K/UHD. However, your review has convinced me to purchase it once the price point becomes more reasonable to my budget.

So is this film appropriate for an 11 year old?
Reactions: Sam Posten

JQuintana said:
So is this film appropriate for an 11 year old?
Click to expand...

Ok good. My son wants to watch it but was worried that the cussing in it may be a bit over the top.

JQuintana said:
So is this film appropriate for an 11 year old?
Click to expand...

That's always a hornet's nest of a question, Johnny.

Not all 11-year-olds are created equal.

No matter what the film, some people will say you'd be crazy to show it to a youngster...and then the next person will chime in to say some horror/slasher movie was their favorite film at age 5 ("and I turned out all right, dammit!").
Reactions: JQuintana

Robert Crawford said:
Thanks for the review Todd. I'd pass on this during its theatrical run and gave little thought to whether I should buy it on 4K/UHD. However, your review has convinced me to purchase it once the price point becomes more reasonable to my budget.
Click to expand...

The movie does contain the one allowable F-bomb for a PG-13.

Todd Erwin said:
The movie does contain the one allowable F-bomb for a PG-13.
Click to expand...

The parents guide at IMDB has one entry that mentions 3 or 4 uses of "F", but that seems unlikely in a PG-13 film.

Robert Crawford said:
Thanks for the review Todd. I'd pass on this during its theatrical run and gave little thought to whether I should buy it on 4K/UHD. However, your review has convinced me to purchase it once the price point becomes more reasonable to my budget.
Click to expand...

Recently, I watched my 3-D Blu-ray of this film and I thought both the 3-D video and Atmos audio were excellent. By no means, this movie isn't great, but it's an entertaining film that I really liked and it kept my attention enough that I want to watch my 4K/Dolby Vision digital of it in the near future.
Reactions: Josh Steinberg
You must log in or register to reply here.
Share:
Facebook Twitter Reddit Pinterest Tumblr WhatsApp Email Link 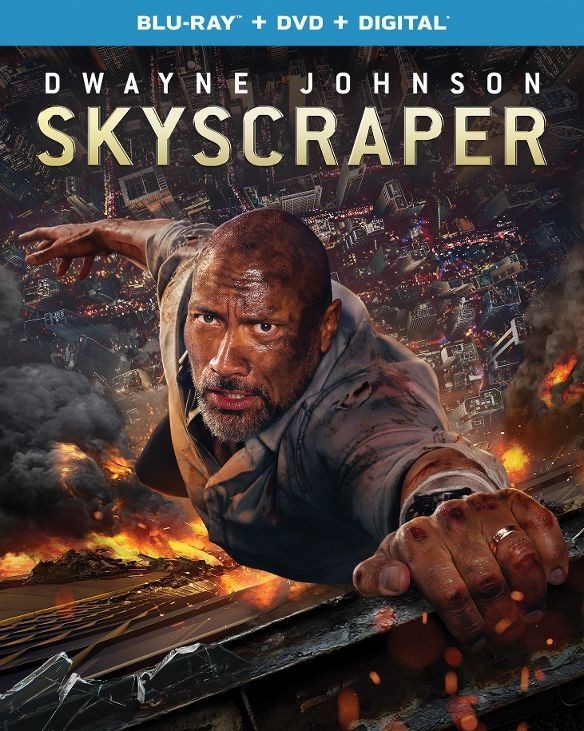