Fans of Die Hard and The Towering Inferno will enjoy this mash-up. 4 Stars

If you combine Die Hard(1988) with some elements of The Poseidon Adventure(1972) and The Towering Inferno(1974), and throw in state of the art special effects, you might have Dwayne(The Rock)Johnson starring in Skyscraper(2018).  Skyscraper succeeds as an engaging popcorn flick even while never actually surpassing the films that inspired it.

Dwayne(The Rock)Johnson plays Will Sawyer, a former FBI agent who was grievously injured in the call of duty, resulting in the loss of one leg below the knee.  Will is now a security consultant in Hong Kong tasked with assessing security for the Pearl, a 225 story tall skyscraper constructed by multi-millionaire Zhao Long Ji(Chin Han).  Will’s surgeon wife Sarah(Neve Campbell) and children Georgia and Henry are residents in an apartment in the Pearl when things go awry.

A terrorist attack on the Pearl is the pretense for a heist of a MacGuffin in the possession of Ji.  An explosion and subsequent fire on the 96th floor place Will’s family in jeopardy from the terrorists and from the fire, all while Will is framed for creating the explosion and makes his way into the Pearl to rescue his family and clear his name.

Skyscraper is written, produced, and directed by Rawson Marshall Thurber(Central Intelligence, Dodgeball).  The cinematography by Robert Elswit(Mission Impossible: Ghost Protocol, The Bourne Legacy) is first-rate, and the special effects are everything that CGI can muster in 2018.  The action set-pieces are very well staged, and the dramatic device of placing Will’s family in direct jeopardy adds emotional heft to the film, even if the plot is somewhat derivative.  Suspension of disbelief is required for certain action scenes and plot points, but Skyscraper is a stimulating for the senses film that rarely slows down long enough for you to reconsider some of its implausible scenarios.

Skyscraper appears on 4K UHD and Blu-ray disc in its original 2:39.1 aspect ratio.  The 4K UHD disc displays the film  in 2160p using the HEVC codec with HDR.  Skyscraper with HDR demonstrates exquisite fine detail with a range of colors that can only be produced in this format on home video.  The scene in which entrepreneur/inventor Ji demonstrates to Sawyer the holographic technology of the Pearl, with the panorama of Hong Kong sprawling beneath them, is a sight to behold in 2160p.

The UHD disc defaults to the English Dolby Atmos audio.  The layered sound mix combines primary audio with background noise to created a fully immersive experience.  Directional audio is excellent on this mix with ambient sounds seeming to emanate from every sound space.  The audio, like the film itself, rarely lets up long enough to take a breather.

Special features include all of the following:

Feature commentary:  Director Rawson Marshall Thurber has an informative feature length commentary as well as optional commentaries during the deleted and extended scenes.

Zhao and Pierce discuss the fire in the Pearl(3:15)

Xia blows up the off-site facility(0:28)

Dwayne Johnson: Embodying a Hero(4:04):  The Rock talks about playing an amputee as an action hero.

Inspiration(4:12):  Cast and crew talk about background research in the film’s portrayal of Will Sawyer as an amputee, and advisor Jeff Glasbrenner, first American amputee to climb

Opposing Forces(2:35):  Cast and crew talk about the female bad-ass roles in this film.

Kids In Action(2:40):  Noah Cottrell and McKenna Roberts are highlighted in their roles as the Sawyer children.

Skyscraper is a fun and entertaining film that requires some suspension of disbelief but is rewarding for that effort.  The 4K UHD presentation is consistently excellent with video and audio that make the sum greater than the individual parts.  The special features are also fun(check out deleted scene “Try Hard”).  Skyscraper is not shy about hiding away from the films that it is emulating but that is part of its charm. 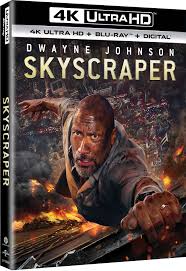