This may not be the party you're looking for... 2 Stars

Sisters tries way too hard to party on Blu-ray, but sadly winds up just trashing the house for no good reason.

Sisters is a movie that probably sounded great on paper, but doesn’t really work in execution. It’s basically an SNL reunion of several women from the 2000s, placing Tina Fey, Amy Poehler, Maya Rudolph and Rachel Dratch in a new comedy about middle-aged women trying to recapture their youth.   There’s not a lot of story here.   Fey and Poehler play sisters whose parents (a surprisingly effective James Brolin and Dianne Wiest) are selling their childhood home in Florida. So the sisters return to their home and throw a final party in the house for all their high school friends, as well as at least one nemesis (Rudolph). Written by former SNL writer Paula Pell and directed by experienced television director Jason Moore, Sisters would seem to have had plenty of advantages just on the pedigree of everyone involved. Except that the actual movie just isn’t that funny.   It has its moments, here and there, and there’s at least a sense that the cast is aware they are playing characters who are old enough to know better than what they are doing. Unfortunately, the movie never really gels – the comedy falls mostly flat and many of the gags feel forced. Much like the sisters’ attempted “rager” party, the movie tries way too hard to be outrageous and winds up instead looking rather foolish.   And at a length of roughly 2 hours for both versions on this Blu-ray, the joke goes on so long that any humor is long gone before the credits roll.

Sisters was released to home theater viewers on March 15th.  The packaging includes Blu-ray and SD DVD editions of the movie with the Blu-ray containing most of the extra features and of course the reference quality picture and sound. Instructions for downloading a digital copy of the movie are included on an insert in the packaging.

Two cuts of the movie are available on the Blu-ray and the DVD.   The R-Rated Theatrical version, which runs just under 2 hours is included along with an Unrated version that runs another 5 minutes.   For purposes of this review, I watched the longer version.

Sisters is presented in a 2.40:1 1080p AVC transfer (avg 30 mbps) that shows off a nice variety of locations, costumes and flesh tones. The challenge involved here is that a high definition image of this situation tends to show the makeup and the age lines of much of the cast – but one imagines that’s part of the point of this movie. There’s a bit of CGI in this movie, which goes thankfully unnoticed until one or two intentionally outrageous moments near the end.

Sisters is presented in an English DTS-HD Master Audio 5.1 mix (avg 3.7 mbps, going up to 4.8 mbps for the big party scenes). As is normal with most comedies, the mix here mostly lives in the front channels for the dialogue but comes alive for music and some atmospherics in the surrounds. The subwoofer is primarily used to buttress the party music.   There are also DTS 5.1 mixes available in Spanish and French and an English DVS 2.0 track.  The French DTS 5.1 mix is only available on the Theatrical version, presumably making space for the commentary track that works on both versions.

The Blu-ray of Sisters comes with a generous array of special features, including a scene-specific commentary, and about 77 minutes of featurettes, deleted scenes, a gag reel and some other additional footage. The DVD edition has a smaller haul, including the commentary and the deleted scenes, but not the featurette or some of the more esoteric additional material. Both editions contain previews for other releases – the difference being that the Blu-ray uses online previews while the DVD has them on the actual disc.

Feature Commentary with Tina Fey, Amy Poehler, Director Jason Moore and Writer Paula Pell (AVAILABLE BOTH ON BLU-RAY AND DVD ON BOTH VERSIONS OF THE MOVIE) – A scene-specific group commentary is provided here, that runs through both versions of the movie – really just adding brief extensions for the additional five minutes of the Unrated Edition. Much of this consists of the group laughing through the movie or offering mutual compliments for their work.

Deleted Scenes (18:03 Total, 1080p) (AVAILABLE BOTH ON BLU-RAY AND DVD) – Nine deleted scenes are included here, usually in the form of additional jokes and gags that didn’t make it to the final cut. Among these are a final resolution to the side story of the young couple trying to buy the sisters’ childhood home.

Extended Scenes (16:54 Total, 1080p) (AVAILABLE BOTH ON BLU-RAY AND DVD) – Nine extended versions of scenes are presented here, adding some excised jokes back into various scenes that had removed them.

Gag Reel (3:17, 1080p) (AVAILABLE BOTH ON BLU-RAY AND DVD) – A short gag reel is included, primarily including takes where Fey or Poehler or both completely broke up before the shot could be completed.

The Improvorama (8:40, 1080p) (AVAILABLE BOTH ON BLU-RAY AND DVD) – Over 8 ½ minutes of ad-libbed alternate lines are included here for multiple scenes in the movie.   This is a fairly long compilation, and the scary part is that this is only the BEGINNING of the alternate takes included on this disc.

How to Throw a Party (1:36, 1080p) (EXCLUSIVE TO BLU-RAY) – This is a specific line-o-rama collection, pulled from one scene where the sisters consult a couple including Kate McKinnon on their advice for what to do in throwing this party.

Grown-up Parties Suck (5:18, 1080p) (EXCLUSIVE TO BLU-RAY) – Here’s a line-o-rama featuring Fey, Poehler, Dratch and Samantha Bee doing various ad-libs around the idea that the characters are 40-something adults trying to throw a teenage dance party.

The Alex Chronicles (2:51, 1080p) (EXCLUSIVE TO BLU-RAY) – This line-o-rama focuses on the character of Alex (Bobby Moynihan) and multiple ad-libs done by Moynihan and the others about his various antics throughout the film.

The Kate & Pazuzo Chronicles (2:05, 1080p) (EXCLUSIVE TO BLU-RAY) – This line-o-rama features ad-libs from Tina Fey and John Cena as they joke their way through an awkward moment and try to maintain a straight face.

A Teen Movie… For Adults (10:26, 1080p) (EXCLUSIVE TO BLU-RAY) – This is a pretty basic making-of featurette that includes the usual mutual compliments amid the usual on-set footage and film clips.

The Original Sister (6:40, 1080p) (EXCLUSIVE TO BLU-RAY) – This may be the most original special feature on the Blu-ray. It’s writer Paula Pell and various cast members reading excerpts from Pell’s actual teenage diary. Not for the faint of heart.

Pool Collapse VFX (0:50, 1080p) (EXCLUSIVE TO BLU-RAY) – This is an assembly of several shots of the house pool collapsing into a sinkhole, first showing what little was seen on the actual set and then with multiple layers of CGI VFX added in…

DVD Edition – An SD DVD of the movie is included in the packaging, containing both cuts of the movie in an anamorphic 2.40:1 transfer and Dolby Digital 5.1 sound in English, Spanish and French (@448 kbps), as well as the English DVS track. And again, the French DD 5.1 mix is only available on the Theatrical Cut. The DVD also holds the group commentary, the deleted and extended scenes, the gag reel and the Improvorama.

Sisters unfortunately wastes a talented cast and a potentially interesting premise on an overlong series of gags that try way too hard to find the funny.   One would think that a reunion of Tina Fey and Amy Poehler with multiple alums (and current members) of SNL would lead to a heck of a comedy. Instead, the movie lurches from beat to beat until it finally peters out at the end. Granted, there are some fun cameos – particularly James Brolin and Dianne Wiest as the aggrieved parents, but the movie as a whole simply never gels. The Blu-ray presents the movie in solid high definition picture and sound, along with a fairly generous brace of additional scenes and ad-libs, for those viewers who may have enjoyed it.

"Sisters tries way too hard to party on Blu-ray, but sadly winds up just trashing the house for no good reason".

The funniest line in the movie to me comes from James Brolin.
I can't say it here because it's a spoiler, but it was a nice reversal on an old catchphrase... 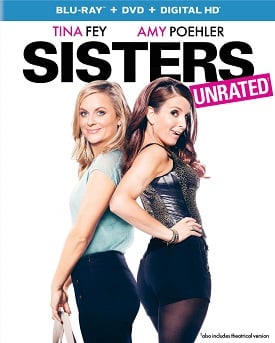