Illumination Entertainment’s Sing is a well-crafted, fun musical romp with the expected laughs and sentiment for which the studio has become known.

Illumination Entertainment’s Sing is a well-crafted, fun musical romp with the expected laughs and sentiment for which the studio has become known. Characterizations aren’t very deep, and the large number of central characters prevents us from ever getting invested deeply in any of their stories (though we care about them all), but the animation is first-rate and the song numbers catchy and entertaining.

In order to save his crumbling and close-to-foreclosure theater, optimistic koala bear Buster Moon (Matthew McConaughey) decides to hold a talent contest and offer a grand prize of $1,000 to the winner. His aging, one-eyed secretary Miss Crawly (director Garth Jennings) mistakenly lists the grand prize on the flyers as $100,000 which leads to hundreds of applicants for the five talent slots. Ultimately chosen for the finals are crooning mouse Mike (Seth MacFarlane), timid elephant vocal dynamo Meena (Tori Kelly), downtrodden piggy housewife Rosita (Reese Witherspoon) paired with jiving European Gunter (Nick Kroll), soulful teenage gorilla Johnny (Taron Egerton), and singer/songwriter porcupine Ash (Scarlett Johansson) recently split from a rock duo where she was merely a backup singer. But each of the talent participants as well as the under-siege-by-creditors Buster find themselves completely distracted by demands on their persons that make the prospect of actually pulling off the show seemingly an impossibility.

Writer-director Garth Jennings hasn’t come up with anything truly innovative here, the anthropomorphized animal civilization a paler reflection of the Oscar-winning Zootopia, and the talent contest no fresher due to the numerous singing and performing reality shows which currently dot the TV landscape. That doesn’t mean we don’t come to care about the leather jacket-clad Johnny who wants to sing rather than be a part of his mobster father’s (Peter Serafinowicz) criminal enterprises or the overworked mom Rosita who must Rube Goldberg her way to making her household chores automatic so she can spend her days at the theater rehearsing. Other characters like the grooving German Gunter, egotistical big shot Mike, the shy, withdrawn Meena, or the heartbroken Ash are cookie cutter stereotypes we’ve seen many times before, and, of course, there is that inevitable moment when the whole show comes crashing down (an admittedly mind-blowing animation sequence) and must somehow be revived and rejuvenated by the sunny Buster with his lazy best friend Eddie (John C. Reilly) by his side. It all leads to the reason for the movie to begin with: the five production numbers we’ve waited the entire film to see: Rosita and Gunter performing “Shake It Off,” Johnny’s “I’m Still Standin’,” Ash’s original song “Set It All Free,” Mike’s “My Way,” and Meena”s “Don’t You Worry ‘Bout a Thing.” Prior to this, there are some sixty tunes offered in snippets (Mike gives us snatches of “Pennies from Heaven” and “Let’s Face the Music and Dance,” for example, and there are lots of little jokey moments during the auditions using songs familiar to us all), but the animators have wisely left full performances to the very end bringing the movie to a satisfying conclusion.

It seems a little odd that the very American Matthew McConaughey would be playing a koala bear, but the studio was obviously going for big names for the marquee rather than worrying about the wide range of accents we hear during the movie. Seth MacFarlane’s creamy crooning elevates the otherwise wisecracker, somewhat off-putting Mike, and Tori Kelly gives Meena’s vocals a terrific shot of adrenaline. Reese Witherspoon won an Oscar for a singing role a decade ago in Walk the Line so her vocals come as no surprise, and Scarlett Johansson’s stirring song stylings also do her proud. Taron Egerton likewise invests a lot of soul and spirit into Johnny’s songs making them standouts. In other effective voicing, John C. Reilly is likeable best friend Eddie, Jennifer Saunders has some memorable moments as Eddie’s once famous grandmother, Peter Serafinowicz scores major points as Johnny’s rough, gruff dad, and Nick Offerman gets a couple of good jokes in as Rosita’s oblivious husband Norman.

The film’s 1.85:1 original theatrical aspect ratio is faithfully delivered in a 1080p transfer using the AVC codec. Colors are bright and bold, and the animation is sharp and very detailed. There is no banding or blooming in evidence, and contrast has been applied to attain a picture perfect image throughout. The movie has been divided into 20 chapters.

A 3D version is available for purchase though it was not sent for review, and there appeared to be several moments where 3D would seem to have been particularly effective in the way gags are structured and carried out.

The Dolby Atmos sound mix (my receiver decoded the Dolby TrueHD 7.1 core track) is stupendously effective in the many song and dance numbers where the many music snippets from standards to hip-hop with their accompanying vocals are given the full surround treatment. Ambient atmospheric effects likewise get placed masterfully through the mix.

Finding the Rhythm: Editing Sing (2:44, HD): editor Gregory Perler discusses choices that were made about what was cut and what stayed in the movie.

The Making of the Mini-Movies (5:56, HD): producer Chris Meledandri and the co-directors from America and France discuss the collaboration which produced the three mini-movies based on characters from the film.

Promo Trailers (HD): Despicable Me 3, Trolls, among others.

Not particularly innovative but certainly an entertaining, tuneful romp featuring diverse characters taking part in a talent contest, Sing isn’t Illumination Entertainment’s greatest achievement, but the songs and production will certainly not disappoint.

Another reviewer said the extras are on the 3D disc. If anyone buys the 3D version, please let me know.

RolandL said:
Another reviewer said the extras are on the 3D disc. If anyone buys the 3D version, please let me know.
Click to expand...

Because the 2D is exactly as described in the review.

Uni sent me only the 2D, so I can't comment on exclusives it may include... 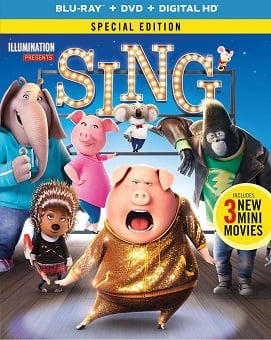