Forum List What's new Dark Style Change width
Log in Register
What's new Search
Menu
Log in
Register
Navigation
Install the app
More options
Dark Style
Close Menu
Posted on February 16, 2020 by t1g3r5fan
You are using an out of date browser. It may not display this or other websites correctly.
You should upgrade or use an alternative browser.
Stephen King werewolf thriller debuts on Blu-ray 4 Stars

Few authors have had their works adapted for the screen more frequently than Stephen King. Since the success of the first film adaptation of his work – Carrie (1976) – King’s tales of terror and imagination have frequently been mined for film adaptations; some of them very good (The Shining, The Shawshank Redemption, and It certainly come to mind), some not so much (Dreamcatcher certainly qualifies here). Released during the heyday of his popularity, Silver Bullet had the Master of Literary Horror adapting his tale of supernatural horror for the big screen. Released by Paramount on DVD, Shout Factory – through their Scream Factory line – has given the movie its Blu-ray debut here in the US.

In the small town of Tarker’s Mills, Maine during the summer of 1976, a strange and brutal series of deaths plague the community. Each of these deaths occur around the time of the full moon, leading one of the residents – wheelchair bound 13 year old Marty Coslaw (Corey Haim) – to believe that the supposed madman the adults talk about is really a werewolf. With the help of his skeptical Uncle Red (Gary Busey) and sister Jane (Megan Follows), Marty sets out to put a stop to the killings, but that puts him in the beast’s sight, leading to a terrifying confrontation during the next full moon…

Silver Bullet came in the wake of successful Stephen King film adaptations like The Shining (1980), The Dead Zone and Christine (both 1983) as well as the revival of the werewolf movie due to the success of both An American Werewolf in London and The Howling (both 1981) and is more character driven than full fledged horror at times. King (adapting from his own novella, Cycle of the Werewolf) does imbue his characters with a likeable charm and great sense of small town life; cinematographer Armando Nannuzzi also does a great job at giving the night scenes an atmospheric quality, especially notable during the ‘private justice’ scene. The only notable complaint made here is that the werewolf scenes aren’t as thrilling or frightening as they should’ve been; however, given the high bar that was set years before this movie, that’s not too surprising, although creature creator Carlo Rambaldi does give us the great werewolf nightmare sequence in the town church that clues us into the identity of the beast in human form. While it fell under the shadow of the more successful werewolf and Stephen King movies that preceded it, Silver Bullet does exude genuine charm and has managed to find a cult following since its release.

In one of his earliest films, Corey Haim is a very solid lead as the young Marty; it would be one of the most notable roles in his tragically brief career and life. Top billed Gary Busey makes for a memorable Uncle Red; those who view him for his crazy antics might want to watch him here and think again – it’s a reminder that he was once considered a very good actor. Everett McGill excels in what might be his best film role as the troubled priest who harbors a dark secret; he’s also double billed for playing the werewolf. Other notable appearances here include Megan Follows as Marty’s sister Jane (Tovah Feldshuh provides the narration as the adult Jane), Terry O’Quinn as the town sheriff, Bill Smitrovich as the town hothead who leads the ill fated search for the werewolf, Joe Wright as Marty’s best friend Brady, Kent Broadhurst as Brady’s distraught father, Lawrence Tierney as the bar owner, Robin Groves and Leon Russom as Marty and Jane’s parents, and James Gammon as Arnie Westrum, the very first victim of the werewolf’s rampage.

The movie is presented in its original 2:35:1 aspect ratio for this Blu-ray release, which appears to have been taken from a recent HD transfer. Film grain is strong and organic throughout, with fine details rendered faithfully and the color palette – especially the blacks – faithfully and strongly represented here. There’s minimal to no instances of issues like scratches, dirt, tears or fading present, which makes this an improvement over the previous DVD release and region free Umbrella Blu-ray release and likely the best the movie will ever look on home video.

The film’s original mono soundtrack is presented on a DTS-HD Master Audio track for this release. Dialogue is clear and strong, with the sound mix and Jay Chattaway’s effective score given a faithful representation with clarity, ambiance and fidelity present. There’s no issues like distortion, hissing, or crackling present which makes this an improvement over previous home video editions and likely the best the movie will ever sound.

Commentary with producer Martha De Laurentiis, moderated by Michael Felscher – Recorded for this release, the producer shares her memories of making the movie as well as her career; this track basically serves as a substitute for an on-screen interview recorded for a 2017 region free Blu-ray release by Umbrella Entertainment in Australia.

Commentary with director Daniel Attias, moderated by Michael Felscher – Recorded for this release, the director talks about his career and some of the memories of making the movie; this track essentially replaces a previous commentary track originally recorded for a 2001 DVD release overseas.

Isolated Score Selections with an audio interview with composer Jay Chattaway – The composer talks about his career and some of the themes and aspects of the film’s music here.

Cutting to the Bone (16:39) – Editor Daniel Loewenthal talks about his involvement with the project as well as memories of working on the second unit for one scene in this brand new interview.

A Little Private Justice (11:51) – Kent Broadhurst recalls his role playing the grief stricken father in the movie in this newly recorded interview.

The Wolf Within (16:15) – Everett McGill talks about the challenge of playing two roles and his appreciation for the fans of the movie in this 2017 interview, ported over from the region free Umbrella release.

Full Moon Fever: The Effects of Silver Bullet (21:03) – Makeup artists Matthew Mungle and Michael McCracken Jr. share some of the details behind the creation of the werewolf among other details in this 2017 interview, also carried over from the region free Umbrella release.

Still Gallery (6:20) – 77 production, behind-the-scenes and promotional stills are presented here with a selection from Jay Chattaway’s score; some of the stills are provided by Michael McCracken Jr. and Edwin Samuelson.

While it received little love from critics and a so-so box office intake upon initial release, Silver Bullet has manage to acquire a cult following over the years. Shout Factory has done a great job in giving the movie its US debut on Blu-ray with high marks in both picture and audio quality while providing some new special features in addition to porting over a couple from the Umbrella region free Blu-ray release. Highly recommended.

I don't think this is a particularly good movie but I do love it. The disc is very good too.

TravisR said:
I don't think this is a particularly good movie but I do love it. The disc is very good too.
Click to expand...

Same here, I really like this movie. I just bought this disc from Amazon as part of their "Buy 2, Get 1 Free" sale.
You must log in or register to reply here.

Friday at 8:03 AM
Robert Crawford 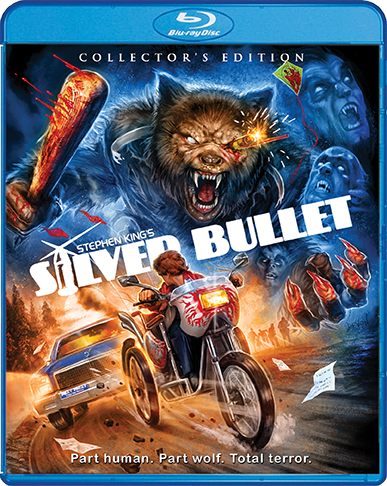