Forum List What's new Dark Style Change width
Log in Register
What's new Search
Menu
Log in
Register
Navigation
Install the app
More options
Dark Style
Close Menu
Posted on June 27, 2021 by Martin Dew
You are using an out of date browser. It may not display this or other websites correctly.
You should upgrade or use an alternative browser.

A couple of years ago, I got a chance to sample some extraordinary new-at-the-time kit at The Indulgence Show in London, where I was covering various stories for Home Cinema Choice magazine. Northern Ireland-based Smyth Research Ltd. had announced the imminent release of the Realiser-A16 audio processor, which could recreate immersive 3D audio over regular stereo headphones. The company claimed the unit could render up to sixteen virtual loudspeakers from any imaginary – or indeed real – locations, and included its own mind-bending pièce de résistance known as ‘head-tracking’.

The Realiser-A16 is still available now, although its design has evolved partially since I tried out the prototype (pictured below). The unit is a perfect solution for late night bingers of Atmos Blu-rays or video games who don’t wish to disturb neighbors, or simply for those saving on the clutter and expense of 11 or more speaker boxes in a spare bedroom or living room. This product could still prove to be that long-awaited multi-channel solution for night owls, or those just living in cramped spaces. 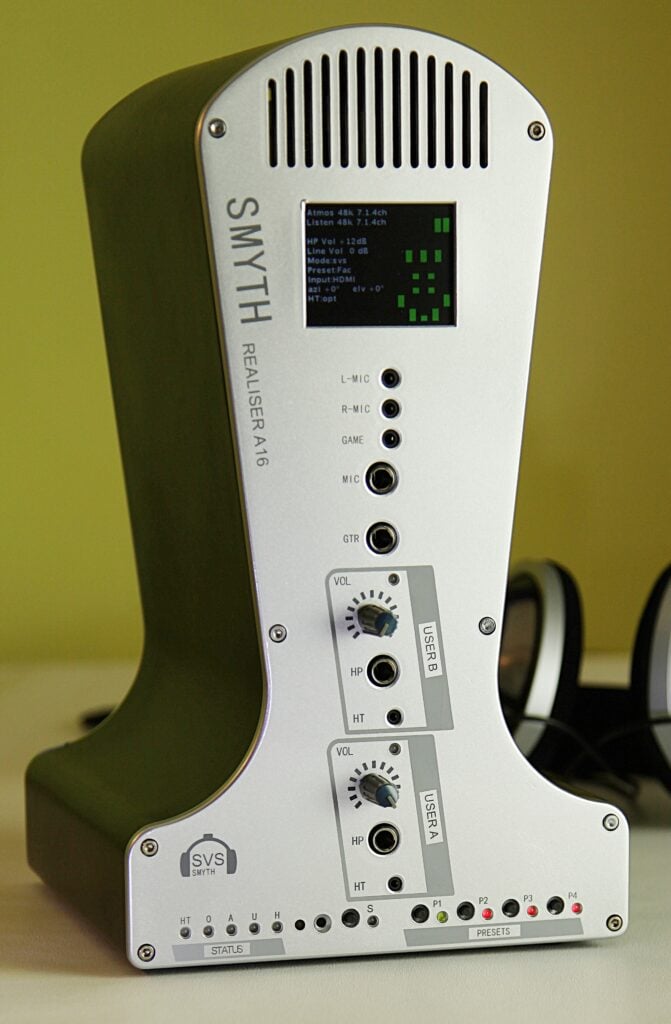 The A16 is the creation of brother duo Stephen and Mike Smyth (although the former appears no longer to be involved), who used Kickstarter to fund development of this multi-functional box. The resulting product allows for a virtual sound field totally indistinguishable from the room characteristics in which the listener is seated. Able to recreate up to 16 channels of audio with conventional stereo headphones, the A16 can simulate immersive, object-based audio formats, including usual suspects Dolby Atmos, DTS:X and Auro-3D.

Upon entering the Smyth Research demo room, Mike sat me in the sweet spot of a 7.1.4 multi-channel speaker monitor setup (with height channels looming above from temporary tripods), and asked me to place a microphone in each ear to measure HRTF (head-related transfer function), a response that characterizes how each ear will receive sound from any given point in the space. With headphones on, Mike Smyth played a sequence from the Dolby Atmos disc of Unbroken from a Sony Blu-ray player linked directly via HDMI to the A16. The act of tilting the head forwards disabled the Realiser box and the actual external monitors in the room would kick in automatically. The perceived response from the soundfield ‘outside’ the phones to that ‘inside’ the phones was truly identical. (If you get a chance, I highly recommend viewing the embedded YouTube video below which reveals some of the extraordinary reactions of Munich High End Show attendees.)

The associated head-tracking function means that the aspect of the listener’s head within the real space is replicated by the virtual space in the headphones. If, for example, the listener turns to face the left wall surround speaker, the direct audio from that channel now appears on-axis. Preset room characteristics come preinstalled on the unit (enabling a user to select a favored cinema, dubbing studio or concert hall), and more real world acoustical options are available to download from Smyth Research’s ‘Virtual Audio Exchange’ website.

Of the entrepreneurial pair, Stephen was the inventor of the Realiser product family. His legacy was developing coding systems for DTS (including the apt-X coding algorithm which became the codec for the 5.1 channel cinema playback system launched with the release of Jurassic Park in 1993). He told me at the time, “The Realiser-A16 can create the sound of any room or auditorium, as if the listener were actually there. For example, users can watch a movie at home, but acoustically be listening to the movie soundtrack as if they were actually in a movie theater.”

Audio codec decoding on board the Realiser-A16 allows for 3D audio formats to be decoded internally via HDMI bitstream. Additionally, discrete audio signals can be sourced from USB and analogue (16 channels), HDMI (8 channels), and SPDIF and line-level inputs (2 channels). Although I have been unable to confirm the latest pricing of the Realiser-A16, the street price was slated to be US $1,950 (+VAT) in 2017, but note that warranties would only accommodate shipping units back to NI for repair. If you want to find out more about the product (plus its professional counterparts), I also suggest you peruse the Smyth Research website and, of course, you can communicate directly with the SR team from there.  Furthermore, if readers here are venturing out to any of the annual tradeshows in North America or Europe this coming year, seeking out any demos by Smyth Research is an absolute must. I guarantee you’ll be blown away.