Posted on August 6, 2016 by Matt Hough
Mediocre western is further harmed by antiquated use of pan and scan. 2.5 Stars

While no great shakes as a western of the 1950s, Sierra Baron doesn’t really get a fighting chance to impress on DVD with such a harmfully destructive use of pan and scan for a Cinemascope movie which destroys widescreen compositions and reduces the impact of the outdoor scenes which were filmed in picturesque Mexico.

A mediocre western with lackadaisical action and subdued romantic entanglements, James B. Clark’s Sierra Baron features a couple of young leading men early in their careers but otherwise pulls its emotional and dramatic punches in ways very unusual for a western of the 1950s. With Cinemascope being the other main draw of the film (unfortunately that’s unable to be appreciated on this abominable antiquated transfer), Sierra Baron doesn’t have much going for it apart from one small surprise at film’s end.

Returning from Mexico after the death of his father to his family’s vast land holdings in California protected by a Spanish land grant issued in 1761, Miguel Delmonte (Rick Jason) is infuriated to see a new town has sprung up on his territory on property sold illegally by Rufus Bynum (Steve Brodie), the charlatan sure that the U.S. Senate will not honor land grants issued by the Spanish government prior to the formation of the United States. Bynum hires gunslinger Jack McCracken (Brian Keith) to take care of Delmonte, but one look at Miguel’s beautiful sister Felicia (Rita Gam) causes McCracken to switch sides to fight for the Delmontes against Bynum. Bynum is further outraged when a wagon train on its last legs is allowed to remain a year on Delmonte’s land to raise crops and increase their herds when they ask permission of the owner thus further sabotaging his efforts to fleece the homesteaders by selling worthless deeds to land he doesn’t own.

Houston Branch has written the screenplay based on the novel by Thomas W. Blackburn, but he and director James H. Clark have not been able to make the action scenes come to life whether it be the bushwhacking of Miguel by land grabbers intent on using brass knuckles on him (he fights them off with the spur from his boot) to a climactic raid on the Delmonte hacienda by Bynum and his motley crew (filmed day for night so the action is a bit murkier than it needed to be). The two romances in the film – McCracken and Felicia, Miguel and newly widowed Sue Russell (Mala Powers) – also rate pretty low on the emotional temperature scale with neither couple generating the sex appeal or electric chemistry that would make a viewer root for a happy ending. There is some suggestion that the vast plains of the Princessa homestead everyone is coveting would look awe-inspiring on the big screen, but the ridiculous pan and scan transfer Fox has issued for the film cuts into those impressions immeasurably. There is, however, a slight surprise at the end of the movie, a conclusion very few will see coming and a bittersweet wrap-up to what had heretofore been a fairly mundane western drama.

Brian Keith wins the acting honors for the film, his swaggering, confident gunslinger a good fit for his size and temperament, but both Delmontes played by Rick Jason and Rita Gam have low energy and don’t always seem invested in their characters (though Jason does wear the array of gaudily designed outfits  with their gold inlays and intricate designs – far more ornate than anything worn by the women – with flair). Mala Powers’s Sue Russell is poorly written with attitudes that change on the spur of the moment, but that isn’t the actress’ fault: she does what she can with this widowed pioneer woman. Steve Brodie makes a fine hissable villain, not a snarling cutthroat but rather a calculating snake oil salesman who becomes more desperate as things don’t go his way. His henchman Frank Goheen played by Lee Morgan is more typically villainous and someone a viewer will love to hate. Lewis Allan does a good job with Hank Moe, editor of the local paper and the man who eventually becomes the territory’s U.S. Marshal.

The film’s original Cinemascope aspect ratio of 2.35:1 has been compromised by Fox’s atrocious continued use of pan and scan reducing the ratio to 1.33:1 (we get not quite three minutes of letterboxed widescreen imagery during the opening credits). With the cropping and zooming to accommodate the process, sharpness is negatively affected throughout though the DeLuxe color comes through reasonably enough (greens seem a bit weak), and skin tones are fairly natural. Contrast has also been consistently applied. There is a fair amount of dust and dirt, some spotting and line twitter (an anamorphic widescreen transfer might have helped alleviate that) can be seen often, and there are also reel change markers here and there. The movie has been divided into chapters every ten minutes so this transfer contains 8 chapters.

The Dolby Digital 2.0 mono sound mix is decoded by Dolby Prologic into the center channel. Dialogue is always easily understood, and the background score by Paul Sawtell and Bert Shefter while nothing special never interferes with the clarity of the spoken word. Atmospheric effects are also mixed without distortion to the dialogue. There are no problems with age-related artifacts like hiss or crackle.

There are no bonus materials with this made-on-demand transfer.

While no great shakes as a western of the 1950s, Sierra Baron doesn’t really get a fighting chance to impress on DVD with such a harmfully destructive use of pan and scan for a Cinemascope movie which destroys widescreen compositions and reduces the impact of the outdoor scenes which were filmed in picturesque Mexico. 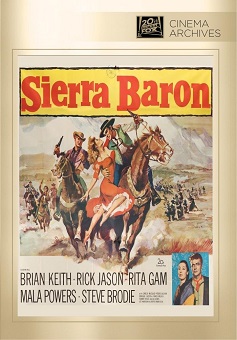