Forum List What's new Dark Style Change width
Log in Register
What's new Search
Menu
Log in
Register
Navigation
Install the app
More options
Dark Style
Close Menu
Posted on March 4, 2017 by Matt Hough
You are using an out of date browser. It may not display this or other websites correctly.
You should upgrade or use an alternative browser.
A thriller that's short of real thrills. 2.5 Stars

A modern variation on the dark, old house thriller, Farren Blackburn’s Shut In provides a lot of smoke and mirrors to mask its inadequacies but to little purpose: this is a threadbare scare picture that only the most naïve would succumb to.

A modern variation on the dark, old house thriller, Farren Blackburn’s Shut In provides a lot of smoke and mirrors to mask its inadequacies but to little purpose: this is a threadbare scare picture that only the most naïve would succumb to. Fine actors and a small but classy production are at the mercy of a less than mediocre script that doesn’t for a moment earn the shivers it so desperately wants to impart.

Six months after the death of her husband Richard (Peter Outerbridge) and the total paralysis of her stepson Stephen (Charlie Heaton) in a car accident, child psychologist Mary Portman (Naomi Watts) tries to get her life back to normal seeing young patients in her home office in Maine. One of them, deaf nine-year old Tom (Jacob Tremblay), makes a tremendous impression on her, and she’s convinced she can help him, but he’s being forcibly relocated by child welfare. So imagine her surprise when Tom turns up at her house one snowy night and just as suddenly vanishes while the state militia goes out searching for him. Mary, who’s been having increasingly disturbing dreams, begins to imagine that Tom’s ghost is haunting her, and when helpless son Stephen turns up with scratches on his face combined with the continual noises in the walls and floor, not even Mary’s psychoanalyst Dr. Wilson (Oliver Platt) can convince her that her home isn’t haunted.

It seems as if screenwriter Christina Hodson and director Farren Blackburn have borrowed a bunch of ideas from dozens of previous horror stories and films for their half-baked thriller effort. Most folks will easily guess before it happens the major twist that occurs two-thirds of the way through the movie, and even for those that don’t, it’s really the only explanation for the events that are taking place (apart from a belief in the paranormal). Blackburn uses every stock trick of the trade in a desperate grasp for thrills: lots of dreams masquerading as real life that the heroine endures and then wakes from drenched in sweat, jump scares featuring deafening orchestral flourishes to punctuate a raccoon jumping from a woodpile, a door slamming, or a face appearing at a window, and the inevitable faceoff between villain and victim where the person being chased makes one ridiculously bad decision after another and earns the audience’s scorn for attempting to reason with a lunatic rather than fighting for her life. The Maine setting is suitably isolated (locations were actually in Montreal and Vancouver), and the director gets a goodly amount of use from the house which at first doesn’t seem threatening but losing its power during the climactic ice storm turns it into a chamber of horrors for the closing showdowns. Despite the ludicrous final confrontation, director Blackburn does keep things moving at a lively clip, and the busy soundtrack becomes an integral part of the thriller with its bumps and bangs in the night.

Naomi Watts is in almost every shot and carries the herculean load of the protagonist nicely even when the script makes this learned and responsible woman sometimes too naïve and stupid to be believed. In the pre-credit sequence, Charlie Heaton as the angry and rebellious Stephen is suitably disturbed and unpredictable making his transformation as the vegetative teen after the accident something of a shock. Clémentine Poidatz has some good moments as Mary’s assistant Lucy, and Oliver Platt is jovial and understanding as the concerned Dr. Wilson. David Cubitt pops up and is most welcome as the divorced father of one of Mary’s patients, a man who obviously has hopes for a future with the good doctor. Jacob Tremblay’s appearances as Tom are sporadic as he comes and goes through the movie, but he scores nicely on camera, just as he did so quietly and effectively in last year’s Room.

The movie’s 2.39:1 theatrical aspect ratio is faithfully reproduced in this 1080p transfer using the AVC codec. Sharpness is excellent in this encode with details in hair textures and facial features quite evident. Color is likewise solid and dependably controlled with believable and appealing flesh tones. Black levels, however, are merely good rather than great, and as much of the movie takes place in shadowy exteriors and interiors, the lack of the deepest black levels is slightly disappointing. The movie has been divided into 20 chapters.

The DTS-HD Master Audio 5.1 encode is a first-rate achievement. With split ambient effects providing many of the thrills and chills of the movie, the surround channels are alive with bumps and scratches which add the most eerie qualities that the film possesses. Nathaniel Mechaly’s score with its rumbling bass and frequent shock flourishes gets the full surround treatment. Dialogue has been well recorded and has been placed in the center channel.

Horror aficionados may find some attractions on display in Shut In (particularly the appealing leading performance by the talented Naomi Watts), but for many, this third-rate thriller just doesn’t measure up to great ones like The Shining and The Other that it’s been so clearly drawn from. 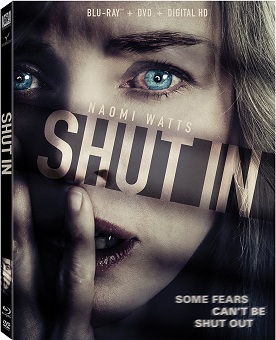