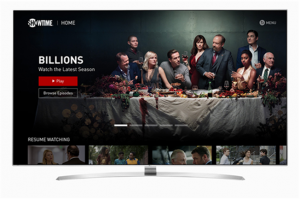 LG Smart TV can download the Showtime streaming app by visiting the LG Content Store, and after signing up for a seven-day free trial, subscribers can get the service for $10.99 a month. The authentication service Showtime Anytime is also available on LG Smart TVs to Showtime subscribers at no additional cost, according to the company. Users will have unlimited on-demand access to a variety of series, including Homeland, The Chi, Billions, Ray Donovan, Smilf, The Affair, Shameless, Twin Peaks and I’m Dying Up Here, as well as the upcoming Patrick Melrose. The package includes access to live broadcasts of the network’s East and West Coast feeds, films, comedy specials, documentaries and sports programming.

Consumers who have signed up to the Showtime streaming service or who authenticate through Showtime Anytime, can watch across supported devices, including phones, tablets and computers. Showtime is currently available to subscribers via cable, DBS and telco providers, and as a stand-alone streaming service through Apple®, Roku®, Amazon, Google, Xbox One and Samsung. Consumers can also subscribe to Showtime via Hulu, YouTube TV, Sling TV, DirecTV Now, Sony PlayStation® Vue and Amazon Channels. Subscribers can also watch on their computers at www.showtime.com and www.showtimeanytime.com.

Noticed Starz streams the audio for its trailers in DTS, first time I’ve seen that. I’ll do the trials of both of these, maybe even keep one if they don’t intentionally get cropped versions of movies or interrupt end credits like the newer Netflix interfaces.
You must log in or register to reply here.
Share:
Facebook Twitter Reddit Pinterest Tumblr WhatsApp Email Link