Posted on February 6, 2016 by Matt Hough
Holmes and Watson on the prowl again 3.5 Stars

Ballyhooed for nearly a year before its New Year’s Day premiere as a standalone episode of Sherlock set not in modern day but in the Victorian era, The Abominable Bride really wasn’t quite as it had been advertised.

Ballyhooed for nearly a year before its New Year’s Day premiere as a standalone episode of Sherlock set not in modern day but in the Victorian era, The Abominable Bride really wasn’t quite as it had been advertised. While definitely containing a Victorian-era mystery with our heroes garbed and fitted accordingly in surroundings of the Gay Nineties, the installment most definitely was grounded in the modern-day Sherlock universe with the mini-movie bouncing back and forth in its last half hour between present and past situations. For fans of the series, it wasn’t a major problem to keep things straight (even as messily arranged as the plotting was), but a stranger coming to this production as his first introduction to Sherlock must have been completely confused once the present day began to intrude on the past timeline.

When recently-wed Emilia Ricoletti (Natasha O’Keeffe) commits suicide on her balcony in full view of several horrified spectators, it comes as quite a shock to her husband when he exits an opium den some time later and his dead wife materializes before him with a shotgun in her hand and blows him away. Inspector Lestrade (Rupert Graves) brings the case to the world’s greatest consulting detective Sherlock Holmes (Benedict Cumberbatch) to investigate. Though his colleague John Watson (Martin Freeman) suggests possibly twin sisters might explain the unexplainable, Holmes shoots down that theory while he begins investigating a series of similar murders all allegedly committed by this spectral bloody bride. When he fails to prevent the murder of Sir Eustace Carmichael (Tim McInnerny) by the Bride after being entreated by his wife (Catherine McCormack) to protect him, Holmes begins to think he may be stumped for the first time in his career.

Mark Gatiss and Steven Moffat have crafted a decent mystery for the Victorian section of the film. It’s a pity that they felt compelled to make this mini-movie, however, a bridging episode between seasons three and four of their Sherlock series (filming this year and slated for presentation in 2017) instead of simply treating us totally to a delectable Victorian mystery in the tradition of Sir Arthur Conan Doyle. The present-day intrusions as Holmes leaves and reenters his memory palace (where the Victorian scenario is playing itself out) frustratingly disrupt the flow of the narrative and the appeal of Douglas Mackinnon’s solid direction and make the film’s final half hour more erratic and much less enjoyable than what has gone before. True, the actions that take place during this final thirty minutes settle once and for all the debate about the possible present-day situation of Jim Moriarty (Andrew Scott) while allowing the two writer-producers to live out a fantasy of staging the actual Reichenbach Falls scene from Doyle’s “The Final Problem” (only, of course, adding their own wry twist to the conclusion), but Moriarty’s condition could easily have been saved to begin the new season of the show. Apart from that, however, the period clothes and production values are aces, and it’s a real kick to see Benedict Cumberbatch and Martin Freeman playing their roles in period and yet with the always identifiable stamp of the Sherlock creators (graphics used for readable materials; Holmes sorting through floating cutouts from newspaper stories for clues rather than perusing his cellphone; the sitting room transported into the middle of a crime scene) never far from the Baker Street lodgings.

Both leading actors won Emmys for their work in season three of Sherlock, and their enduring camaraderie and expert timing with lines and reactions continue to make the series special. Una Stubbs’ prickly Mrs. Hudson has become a real audience favorite, and she stands out in all of the 221B Baker Street sequences. Once again, Martin Freeman’s real-life companion Amanda Abbington has been given a generous amount of screen time as Watson’s wife Mary (in comparison to the little the character ever contributed to the original Doyle tales) though she figures less in this story than in the final episodes of season three. Rupert Graves plays the Victorian-era Lestrade as much denser than his present-day incarnation while Andrew Scott pops up here and there as Moriarty and always to crackling good effect. Writer-producer Mark Gatiss gets to wear a fat suit as Victorian-era Mycroft, but his acting in both time periods is routinely fine. Louise Brealey as Molly Hooper (not a great male impersonation in the Victorian-era story), Catherine McCormack as Lady Carmichael, and Natasha O’Keeffe as the mysterious Bride all contribute to the film’s success.

The program is presented in its widescreen television aspect ratio of 1.78:1 in 1080p resolution using the AVC codec. Sharpness is excellent except in sequences where heavy use of green screen necessitates the softening of the images to blend into the computer generated backgrounds. Color is mildly desaturated during the Victorian era portions of the story with the exception of vivid red. Otherwise, skin tones are realistic and appealing. Black levels are very good throughout.

The soundtrack has been afforded the luxury of a Dolby Atmos sound mix (decoded as Dolby TrueHD 7.1 on my equipment), and it’s a vivid, multi-directional delight. The music of David Arnold and Michael Price sounds wonderfully rich and full piped through the entire soundstage as it is, and atmospheric split effects and directionalized dialogue enhance the listening experience and really give this production a feature film (rather than television production) feeling.

Mark Gatiss: A Study in Sherlock (29:54, HD): the creator-writer-actor tours the sets for this production and also engages in discussions with fellow creator Steven Moffat and stars Benedict Cumberbatch, Martin Freeman, Amanda Abbington, Una Stubbs, and Andrew Scott about this production and the series as a whole.

Mark Gatiss: Production Diary (5:06, HD): a day (February 4, 2015) in the life of Mark Gatiss as the production films the Reichenbach Falls sequence.

Writers’ Conversation (3:50, HD): Mark Gatiss and Steven Moffat talk about their love for Doyle’s Holmes stories and what gives them their appeal. They also talk about the contrasts between Sherlock and Mycroft Holmes.

Creating the Look (30:34, HD): eight featurettes which focus on an aspect of the filming of The Abominable Bride. They deal with the depiction of Afghanistan, the window smashing, the maze, the food props, location scouting, Victorian London, the costuming, and the Reichenbach Falls. Contributing to the discussion are director Douglas Mackinnon, producers Mark Gatiss, Steven Moffat, and Sue Vertue, special effects supervisor Danny Hargreaves, location manager Ben Mangham, costume designer Sarah Arthur, and actress Natasha O’Keeffe.

Sherlockology Q&A (20:23, HD): a series of questions and answers about their work on the show featuring Amanda Abbington, Una Stubbs, David Nellist (who plays Stamford), Sue Vertue, and Steven Moffat.

Sherlock: The Abominable Bride has its pluses and minuses. Those looking forward mostly to the Victorian-era mystery will have a decent puzzle to solve along with Sherlock Holmes while having to sidestep the sometimes intrusive modern day frame story. Fans curious about some loose ends from season three of Sherlock will likely cheer that their conundrums have been explained. Those who have never seen Sherlock before are not encouraged to use this episode as a starting point. As far as the Blu-ray disc is concerned, it’s top notch in picture and (especially) sound. 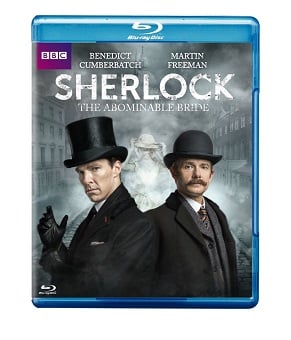