Worthy sequel that is more fun than the first 4 Stars

Sherlock Holmes: A Game of Shadows arrives on 4K UHD Blu-ray with a slightly upgraded video transfer, but the same sound mix and extras from the 2012 Blu-ray release.

Now that consulting detective Sherlock Holmes (Robert Downey, Jr.) knows who was pulling the strings behind Lord Blackwood’s villainous plot to overthrow the British government, it’s become his singular goal to stop Professor James Moriarty (Jared Harris) and whatever his nefarious plans may be. There’s little doubt (at least to Holmes) that the unassuming academic is behind a whole series of seemingly unrelated events – anarchist bombings, the death of a renowned physician, and an impending international peace summit – but his end game is unclear, at least for the moment.

Knowing Holmes is his intellectual equal, and thus the only real threat to his plans, Moriarty has no compunction targeting those important to the detective. The most obvious is Holmes’s longtime partner (and sometimes begrudging friend) Dr. Watson (Jude Law), who has even more to lose now that he’s married his longtime love Mary Morstan (Kelly Reilly). Brought into the fray despite his objections, Watson will again prove indispensable at key moments, though the aid of the mysterious gypsy woman Simza (Noomi Rapace) and Holmes’s brother Mycroft (Stephen Fry) will show it takes more than one person (genius though he may be) to take down a madman.

With the success and popularity of the BBC’s Sherlock TV series, which sets the crime-solving duo of Holmes and Watson in modern times, it’s been kind of easy to forget – and even overlook – the feature film franchise helmed by director Guy Ritchie. It’s not necessarily because the features keep the character in the 19th-Century, as there are some undeniably modern (and thus a little anachronistic) aspects to Ritchie’s productions. But the modern urban setting of the BBC property is representative of an undeniable vim and vigor that the films lack, despite their flashy “Holmesavision” visual effects and bombastic action sequences.

That’s not to say Ritchie’s films aren’t entertaining and fun. In the sequel, Downey, Jr. still makes for a surprisingly deft Englishman (though it’s becoming more difficult to see him as anyone else but Tony Stark these days) and his brother-in-arms chemistry with co-star Law never flags.

Harris, who is quickly becoming the quintessential smarty-pants villain after his turn on the TV show Fringe, is also perfectly cast as Moriarty and almost steals the show (Fry as Mycroft certainly does so in the handful of scenes he’s in).

Unfortunately Rapace – who had a more substantial role in the Swedish Dragon Tattoo trilogy – doesn’t get much to do. She’s never relegated to a damsel in distress per se, but given her past credits it’s obvious she could have handled more.

The “game of shadows” of the title proves adequate, if a little over-complex at times, with the ambitions fueling it seeming a little…pedestrian, once revealed. More compelling is Moriarty’s cynical, yet all-too-true evaluation of the human condition. That Holmes merely acquiesces to it makes it all the more brutal, and ultimately the superior motive for a villain of Moriarty’s caliber.

Sherlock Holmes: A Game of Shadows was shot on 35mm film and completed as a 2K digital intermediate in the 2.39:1 aspect ratio. Warner’s 2160p upscale adds HDR10 high dynamic range, which does give the film much improved contrast over the 2012 Blu-ray. Take special note of the opening sequence of Watson at the typewriter, as the stained glass windows behind him are much more pronounced on the UHD disc while appearing almost over-exposed on the Blu-ray. Detail receives a slight uptick, revealing the velvet texture of Irene Adler’s costume much more distinctly. Colors are a bit more stable, with many sequences having a more sepia tone on the UHD disc rather than yellow on the Blu-ray.

Unfortunately, Warner has decided not to upgrade the audio on this release, and instead uses the same DTS-HD MA 5.1 track found on the 2012 Blu-ray. As Cameron Yee noted in his review of that release: Dialogue in the 5.1 DTS-HD Master Audio track is consistently crisp and clear. Surround effects can be quite aggressive but also nicely balanced and rendered with the score, lending both street scenes and action sequences a great, immersive quality. LFE drops in with explosions both large and small, but never pushes things too far. Consequently the most action-packed scenes won’t be rattling the walls, but will handily get the point across.

This release contains no new special features, and are only included on the 2012 Blu-ray.

Sherlock Holmes: A Game of Shadows Movie App: Since BD-Live is required, I doubt this feature is still accessible.

Warner’s Sherlock Holmes: A Game of Shadows on 4K UHD Blu-ray offers a limited upgrade to owners of the 2012 Blu-ray release, with only slightly improved video.

Again, thank you for this review, but I'm going to bypass this 4K release too as I'm happy with the 4K/Dolby Vision digital.
Reactions: Osato

Robert Crawford said:
Again, thank you for this review, but I'm going to bypass this 4K release too as I'm happy with the 4K/Dolby Vision digital.
Click to expand... 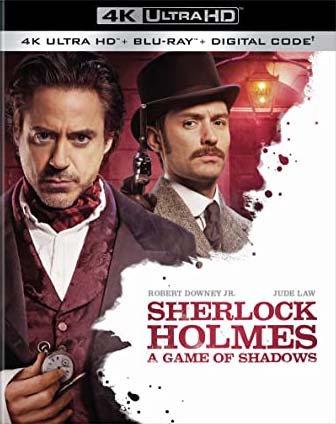