Even the filmmakers themselves call Alain Desrochers’ Security “Die Hard in a Mall,” and that’s exactly what it is only this new action saga lacks the intelligence, wry and canny humor, and real sense of size and scope which that great Bruce Willis star-making project brought us.

Even the filmmakers themselves call Alain Desrochers’ Security “Die Hard in a Mall,” and that’s exactly what it is only this new action saga lacks the intelligence, wry and canny humor, and real sense of size and scope which that great Bruce Willis star-making project brought us. Security is on a much smaller scale and contains moments of great suspense and moments so ridiculous that you want to shout at the screen in anguish. Sadly, there are many more examples of the latter reaction than the former.

Ex-Army special forces Captain Eddie Deacon (Antonio Banderas) is suffering from the effects of PTSD and has been without work for a year. In desperation, he takes the job of lowly security officer at the Ridgeside Mall and reports for his first night of work with the good-natured Vance (Liam McIntyre) as the chief guard. The other guards, computer geek Mason (Chad Lindberg), hungover Ruby (Gabriella Wright), and wide-eyed Johnny (Jiro Wang), are all accustomed to the low key, undemanding nature of the work. A terrified young girl Jamie (Katherine de la Rocha), banging on the doors to be let in, has escaped from an armed body of mercenaries out to kill her for witnessing some of their gangland activities, and it’s up to Eddie and the other guards to protect her from the onslaught of the vicious Charlie (Ben Kingsley) and his trained army of assassins.

Tony Mosher and John Sullivan haven’t put a lot of thought into their screenplay’s characters since Jamie arrives petrified and fainting from fear but within a couple of minutes she’s ready to go to war against this overwhelming band of cutthroats (it’s more understandable that at least some of the guards are ready to do battle), nor have action scenes been set up to take advantage of the mall’s many possibilities for booby traps to ward off the enemy (admittedly, there is some of this in the film’s first half, but it’s practically non-existent in the second, that half reduced mostly to continual firepower from both sides), and action scenes later in the movie are so over the top (a barely functioning Spyder bike used as a torpedo at the enemy’s surveillance van) as to be ludicrous. And, of course, it’s pretty preposterous that six mall guards, most untrained, could take on dozens of highly trained and fully weaponized mercenaries and some of them live to tell the tale. In an effort to put some distance between Die Hard and Security, Bandaras’ Eddie isn’t made a wise guy or unpredictably slick (the movie could actually have used some oddball humor instead of just taking a breather at the one-hour mark before the final standoffs), and Ben Kingsley’s Charlie, while a cool customer spending much of the movie with a Cheshire Cat smile plastered on his face, is made annoyingly verbose to the point of our wanting one of his own men to take him out just to shut him up. But the narrative’s best ideas are small ones: a dead-eye sniper (Mark Rhino Smith) posted at the escape route ready to take out any of the good guys who make it out the door, the use of silly toy walkies for the good guys to use for communications, the opening takedown of U.S. Marshalls which has a dramatic irony payoff much later in the movie.

It’s nice to see Antonio Bandaras as a damaged character in an action movie that, had it been better, might have given him a second act action career like Taken gave Liam Neeson. The script doesn’t really give us much background on this army of men headed by Ben Kingsley’s Charlie, and the actor uses his mellifluous voice to fill in the gaps of under-written characterization. Liam McIntyre has a fantastic scene showing off his impeccable American accent as he explains the ins and outs of the mall cop job in the early going, but he rolls nicely with the punches as things turn serious later on. Chad Lindberg squirms and whimpers convincingly as Mason, Gabriella Wright shows some fire as Ruby (even if her two perfectly shot arrows into Lillian Blankenship’s tough Silvia have no effect), and poor Jiro Wang as Johnny gets the airhead award for forgetting the bad guys are outside as well as inside. Katherine de la Rocha’s transformation from the terrified Jamie into a ten-year old version of G.I. Jane isn’t her fault in the writing and is performed just right.

The film has been framed at 2.35:1 and is presented in 1080p resolution using the AVC codec. The sharpness is exceptionally good as we can explore facial features on the main actors in close-up to our heart’s content. Color is wonderfully saturated but is never overdone resulting in believable skin tones. Contrast has been consistently applied throughout, and black levels are nice and dark. The movie has been divided into 20 chapters.

The DTS-HD Master Audio 5.1 sound mix provides some thumping bass undertones during many of the dramatic moments of the movie, and the music by FM Le Sieur provides a constant source of surround activity. The continual firepower might not always get the directional placement to make this a reference sound mix, but it’s powerful enough to get the job done. Dialogue has been well recorded and has been placed in the center channel.

Security – Behind the Scenes (8:10, HD): producers David Harris, Jeff Greenstein, Jonathan Yunger, and Les Weldon, director Alain Desrochers, and actors Antonio Banderas, Ben Kingsley, Katherine de la Rocha, Gabriella Wright, and Liam McIntyre all comment on the story, characters, and action scenes, surprisingly revealing that the movie was not shot in a real mall but in a mall set built in three sections on a soundstage.

Security is a low budget action film with fairly predictable twists and turns that attracts interest due to its three main actors Antonio Banderas, Ben Kingsley, and Liam McIntyre. Fans of the stars may opt for a rental. The Universal Blu-ray does offer outstanding picture and sound quality. 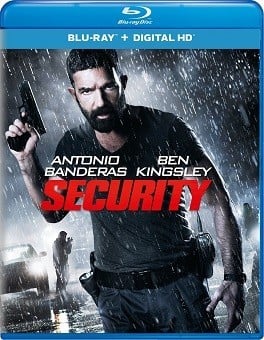