Cute, but obviously for a much younger crowd of dog owners 4 Stars

The Secret Life of Pets takes the premise of Toy Story, applying it to our beloved animals who often stay home alone for hours every day. It’s an effective story and is fairly harmless for the entire family, but is definitely aimed at a much younger audience.

Life is going great for terrier Max (voiced by Louis C.K.), having been adopted by human Katie (voiced by Ellie Kemper), who found him outside a shop in New York City. While Katie leaves the apartment each day for work, many of the neighbor’s stop by to visit, including cat Chloe (voiced by Lake Bell), dachshund Buddy (voiced by Hannibal Buress), pug Mel (voiced by Bobby Moynahan), and guinea pig Norman (voiced by director Chris Renaud). Until one day, Katie brings home a large, shaggy brown stray, Duke (voiced by Eric Stonestreet), and suddenly Max feels betrayed and jealous, wanting to somehow get Duke sent back to the pound. On a daily outing to the park, Max and Duke become separated from their dog walker, finding themselves in an alley full of cats led by a pink hairless sphinx, Ozone (voiced by Steve Coogan), who has their collars removed. Fleeing from the alley, there are soon captured by a pair of dog catchers and while being transported to the pound, are freed by Snowball (voiced by Kevin Hart), a former magician’s white rabbit that is the leader of the Flushed Pets, a “radical” revolutionary group of discarded animals (including exotic alligators and pythons). Gidget (voiced by Jenny Slate), the white pomeranian who lives across the street from Max, gets concerned when he doesn’t return home with Mel and Buddy. She forms a rescue party with help from hawk Tiberius (voiced by Albert Brooks), elderly basset hound Pops (voiced by Dana Carvey), Mel, and Buddy. As Max and Duke try to escape from Snowball and find their way home, they soon become friends, bonding over Duke’s loss of his original owner that led him to be rescued by Katie at the pound in the first place. Can Gidget and her team find Max and Duke and get them home safely before Katie gets home?

The plot of The Secret Life of Pets is overly familiar, almost identical to Pixar’s groundbreaking Toy Story from 1995, but there is just enough originality to keep it entertaining. The humor and overall storyline, however, may be more appealing to a younger, dog-loving crowd than this older cat lover. As an art form, this is Illumination Entertainment’s best animated effort so far, with realistically textured fur and hairs that react with the characters’ movements and expressions fluidly. The voice acting is also superb, although Kevin Hart’s Snowball can be a bit too much at times.

The consensus among many websites is that The Secret Life of Pets was rendered and completed as a 2K digital intermediate, upscaled and HDR’d for this 4K UHD release. The good news is that the movie looks great on this UHD Blu-ray, with vibrant colors and excellent fine detail and contrast. The bad news is that the exact same thing can be said for the 1080p Blu-ray. The UHD does offer a slight improvement in fine detail (particularly the small, individual hairs on the animals), color gamut, and contrast (deeper blacks and a brighter picture), but one has to really look for it.

The UHD and Blu-ray contain the same Dolby Atmos track (with a Dolby TrueHD 7.1 core). When played back in a 5.1 configuration with additional front heights and Pro-Logic IIz enabled, the result is not quite as immersive as most other Atmos tracks, but still an enjoyable one. Dialogue is clear and understandable, directed mostly to the center channel with occasional panning where necessary. Heights are used sparingly, mostly for atmospheric effects such as echoes and random voices in Snowball’s sewer lair.

All of the special features can be found on the Blu-ray disc. Like the movie, most of the features are aimed at a younger audience, with very little technical information provided on the making of the movie. For descriptions of each feature, please see Matt Hough’s review of the Blu-ray edition.

Essentially Toy Story with animals, The Secret Life of Pets is an entertaining 87 minutes, with the under 10 crowd likely enjoying it much more than adults. The UHD video presentation is minimally better than the Blu-ray edition, so if you don’t need a DVD copy and want to future-proof, go for this edition.

Amazon has dropped the price of this 4K/UHD release to $20.77 so I jumped on it.
You must log in or register to reply here. 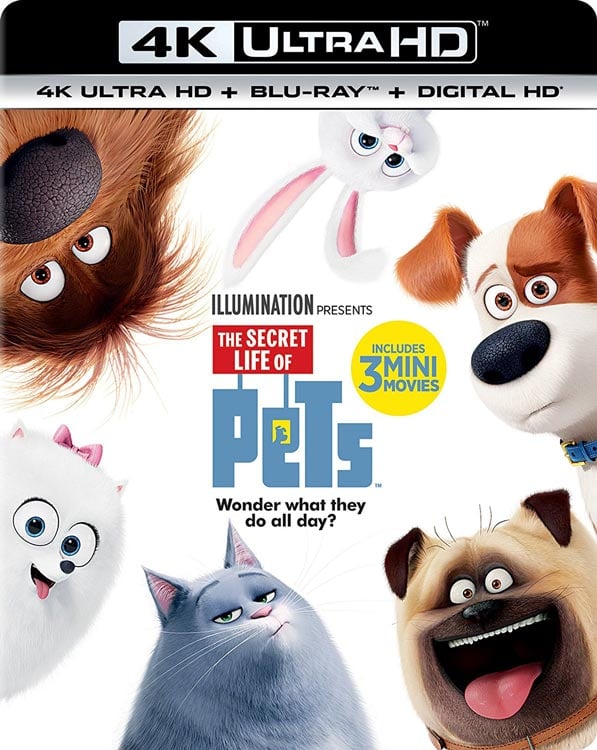