A mistake-prone walk in the park brings forth a day of riotous adventure and near-death experiences for two pooch adversaries in Illumination International’s The Secret Life of Pets.

A mistake-prone walk in the park brings forth a day of riotous adventure and near-death experiences for two pooch adversaries in Illumination International’s The Secret Life of Pets. Often frantic and filled with the slapstick for which its studio is known, The Secret Life of Pets does contain a handful or two of memorable animal characters and enough humor, thrills, and charm to smooth over its rough patches. With so many animal lovers the world over, it’s no wonder the show was such a big international hit ($873.4 million at last count).

Lovable, loyal terrier Max (Louis C.K) spends his entire day every day waiting for his beloved owner Katie (Ellie Kemper) to come home. There are lots of other animals in his apartment building who manage to drop by to say hello each day, but Max’s heart belongs only to Katie. When Katie brings home a large, oafish mutt Duke (Eric Stonestreet) from the pound one day, Max can’t understand why he wasn’t enough for his owner, and he’s determined to get rid of his adversary. A park outing with his pet walker the next day, however, ends in his and Duke’s collars slipping off and their spending the day eluding malevolent dog catchers and getting sucked into an underworld of cast off animals called the Flushed Pets led by the vicious, vengeful bunny Snowball (Kevin Hart). Neighbor Pomeranian Gidget (Jenny Slate) who is sweet on Max rounds up the other apartment pets and hawk Tiberius (Albert Brooks) to scour Manhattan searching for her love not realizing that by now Max and Duke have made their way to Brooklyn searching for Duke’s former owner.

The screenplay by Cinco Paul, Brian Lynch, and Ken Daurio uses mannerisms and behaviors of animals known to pet owners the world over, and the wonderful assortment of different pets with their varying attitudes toward their owners makes for continual amusement. Max and Duke’s adventures in “the wild” are filled with enough conflicts, however, that the constant intrusion into the story of the loud, bellowing Snowball gets a little irritating by the film’s halfway point. The “rescue squad” made up of Gidget, lazy fluffball cat Chloe (Lake Bell), a partially lame basset hound Pops (Dana Carvey), pug Mel (Bobby Moynihan), and Tiberius have their own adventures scurrying around the city to find their friend (in addition to, of course, meeting up with and handling the Flushed Pet brigade), so that there are actually three groups of animals that the animators must jump to and fro with. Along the way, there are spots for musical numbers (Grease’s “We Go Together” in a wiener factory as our heroes have their first food in a day and the opening “Welcome to New York” which makes a colorful beginning to the movie), an abundance of adventure dotted with raucous comic slapstick (a frantic bus driving sequence with Snowball at the wheel isn’t all that much fun), and the expected poop jokes (though at least these aren’t used continuously). On the other hand, sentiment is dished out sparingly making for an endearing story that never turns mawkish.

The voice acting is all splendid. Louis C.K. as Max is the pooch we dog lovers always crave: loyal, affectionate, behaved, and trained. Eric Stonestreet’s Duke becomes more lovable the longer we are in his presence. Jenny Slate is the sweet, devoted Gidget, Lake Bell is the self-absorbed Chloe, Albert Brooks is the initially scheming but eventually faithful Tiberius, and Dana Carvey is the wise, astute Pops: all beautifully acted. A little of Kevin Hart’s screeching, preening Snowball goes a long way though he’s likely an audience favorite, and Ellie Kemper’s Katie brings in the human world gracefully.

The film’s 1.85:1 theatrical aspect ratio is faithfully reproduced in this 1080p transfer using the AVC codec. Sharpness is superlative (the animal furs have real texture), colors are bright and beautiful, and contrast has been consistently applied making for a reference quality picture. New York City looks simply glorious with spectacular skyline animations, but the sewer and underground areas are not prettified for visual appeal. The movie has been divided into 20 chapters.

The movie was released to theaters in 3D, and a 3D copy is available for purchase. There are several scenes in the film which would appear to use the 3D medium to enormous advantage, so those so equipped may want to check it out.

The Dolby Atmos sound mix (decoded on my equipment as the Dolby TrueHD 7.1 core)  is terrific with voices beautifully recorded and mostly placed in the center channel with an occasional whiff of directionalized dialogue. Alexandre Desplat’s busy, jazz-infused score gets wonderful placement through the fronts and rears. Atmospheric effects may be a trace less enveloping than one might expect from the best animated sound mixes, but this is really splitting hairs. It’s a superlative audio track.

The Humans That Brought You Pets (8:43. HD): producer Chris Meledandri introduces the audience to other key members of his team, each of whom describes his or her work on the project: fellow producer Janet Healy, directors Chris Renaud and Yarrow Cheney, and writer Brian Lynch.

All About the Pets (6:26, HD): animal trainer Molly O’Neill welcomes actors Eric Stonestreet and Kevin Hart and invites them to handle a succession of cuddly and creepy creatures.

Anatomy of a Scene (4:46, HD): producers Chris Meledandri and Janet Healy introduce us to some of the key animators on the project who describe briefly their work to bring the pets to life.

The Best of Snowball (1:15, HD): a few key lines and scenes from Snowball’s on-screen activities.

Hot Dog Sing-Along (1:12, HD): sing-along lyrics for “We Go Together” accompany the sequence from the movie.

Go-Pro: The Secret Life of Pets (2:04, HD): four stunt sequences mirrored by pets from the movie.

The Making of the Mini-Movies (7:23, HD): Illumination Studio head man Chris Meledandri explains the America-Paris connection in making these films with input from the French crew members who made them possible. 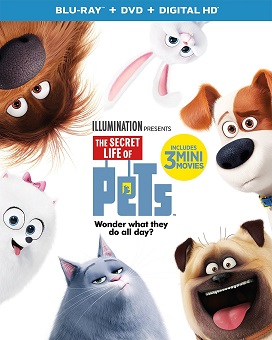