Forum List What's new Dark Style Change width
Log in Register
What's new Search
Menu
Log in
Register
Navigation
Install the app
More options
Dark Style
Close Menu
Posted on April 1, 2019 by Todd Erwin
You are using an out of date browser. It may not display this or other websites correctly.
You should upgrade or use an alternative browser.
Predictable Chick Flick 3.5 Stars

Second Act is an entertaining but highly predictable light-hearted comedy, and Universal’s Blu-ray release delivers the goods and not much more.

Maya Vargas (Jennifer Lopez) is up for a promotion at the retail store she has been assistant manager for several years, and her interview falls on the same day as her 40th birthday. Despite the street smarts, what Maya lacks is a formal education or college degree, something Value Shop requires in a full managerial position. This places a damper on the surprise birthday party her best friend Joan (Leah Remini) has thrown for her that evening. Her tech-savvy godson, Dilly (Dalton Harrod), pieces together a resume and online presence depicting Maya as a Harvard graduate with a history of working for some of the top cosmetic companies and a very active lifestyle, forwarding all of that to cosmetic company Franklin & Clarke, who then contacts her for a job interview with CEO Anderson Clarke (Treat Williams). Clarke hires her as a consultant almost immediately to help them revitalize their organic skin care line, pitting her against Clarke’s daughter Zoe (Vanessa Hudgens). Maya’s boyfriend, Trey (Milo Ventimiglia), urges Maya to reconsider, knowing that the house of lies will eventually come crashing down and end in disaster, but Maya refuses and the two break up. What Trey doesn’t know is that Maya dropped out of high school when she became pregnant at 17 and gave up the baby for adoption, something she has regretted ever since. And this is where the predictable pattern in the screenplay by Justin Zackham (Bucket List) and Elaine Goldsmith-Thomas (J-Lo’s long-time producing partner) starts to unravel, dictating to the audience what will happen throughout the story for the next hour and a half. Surprise – Zoe is actually Maya’s long-lost daughter! Surprise – Zoe’s underlings (without her knowing) are about to uncover Maya’s secret past. Surprise – Maya’s team will win the competition and Maya will be hired as an employee. Surprise – everything will work out for everyone in the end, including Maya and Trey eventually getting back together and becoming engaged.

Director Peter Segal, best known for Adam Sandler “comedies” Anger Management, 50 First Dates, The Longest Yard puts the movie on auto pilot early on, and it is the performances by the talented cast that holds the movie together. Jennifer Lopez is very good as the hard-luck woman dealing with what seems like a lifetime of bad choices and a mid-life crisis. Treat Williams is charming as always as the understanding father figure to adopted daughter Zoe and the company as a whole. Leah Remini is convincing as the annoying best friend. One of the real standouts, though, is Charlene Yi as Maya’s agorophobic assistant Ariana who also has a crush on the team’s lead scientist Chase (Alan Aisenberg), and their interactions are some of the funniest scenes in the movie.

Second Act was captured digitally on Arri Alexa cameras, and likely completed as a 2K digital intermediate. Universal’s Blu-ray presents the film in a nice AVC-encoded 1080p transfer that preserves the theatrical aspect ratio of 2.39:1. Like the movie itself, this is a pretty by the numbers transfer, with natural color saturation and an acceptable level of detail that shows off the textures of the costumes and set design, but likely won’t make one want to pull this movie out as demo material. Contrast is also very good, with decent black levels and minimal crushing.

Second Act’s DTS-HD Master Audio 5.1 track does what it needs to do as a comedy mix, and really nothing more. It is a fairly front-heavy mix with ambient surround activity that adds some texture such as street noise and other atmospheric sounds. Front stereo separation is very good, and dialogue is well-prioritized, always understandable and directed mostly to the center channel.

The Special Features included are paltry, comprising of movie pre-show trailers that barely exceed 3 ½ minutes total, plus a trailer that is longer than any one of the featurettes.

Connecting with Milo Ventimiglia (1080p; 0:55): Milo and J-Lo discuss how great it was to work with each other in between clips from the film.

The Empowering Women of “Second Act” (1080p; 0:55): J-Lo, Vanessa Hudgens, and Leah Remini discuss how great it was to work with each other in between clips from the film.

Friendship On and Off the Screen (1080p; 0:57): J-Lo and Leah Remini discuss how their friendship off screen helped with their chemistry on screen other in between clips from the film.

Working with the Ones You Love (1080p; 0:32): A brief summary of the previous featurettes.

DVD Copy: The movie in 480p and Dolby Digital 5.1 audio, plus all of the above listed special features.

iTunes Digital Copy: An insert contains a code to redeem a digital copy on iTunes. Why only iTunes? Because this is an STX title distributed by Universal.

Second Act is highly predictable, but does have some entertainment value thanks to its strong cast. Universal’s presentation is solid, but definitely won’t win any awards.

Colin Jacobson said:
3/5 is at least 1.5 stars too many! Terrible film!
Click to expand...

Opinions vary, especially, when it come to comedies.

This one's more Hallmark Channel than true comedy. It sells as a comedy - or even a rom-com - but it's not really that in the end...
You must log in or register to reply here. 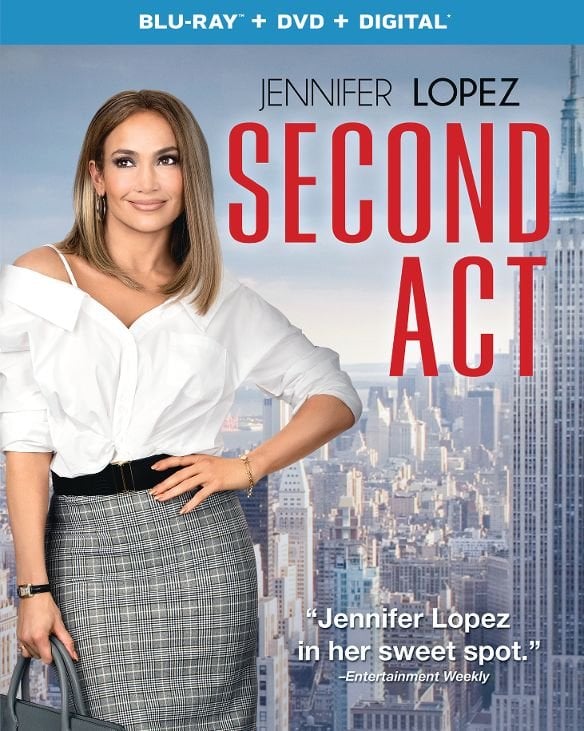