Forum List What's new Dark Style Change width
Log in Register
What's new Search
Menu
Log in
Register
Navigation
Install the app
More options
Dark Style
Close Menu
Posted on August 12, 2019 by Ronald Epstein
You are using an out of date browser. It may not display this or other websites correctly.
You should upgrade or use an alternative browser.
3 Stars 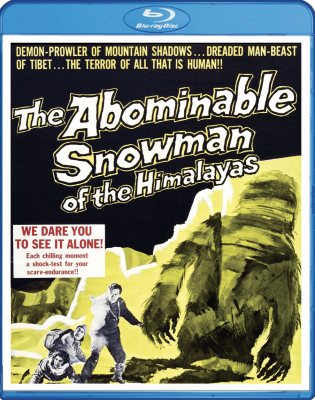 Botanist Dr. John Rollason (Cushing) decides to join the exploration team of crass, American showman Tom Friend (Forrest Tucker) on a dangerous expedition into the Himalayas to search for the legendary Yeti. Soon after setting up camp, the group is attacked by a large beast which is shot by trapper Ed Shelley (Robert Brown) and stored in a cave to attract a live specimen. A smart, suspenseful and scary film that will set both your imagination and your fear of the unknown running wild, The Abominable Snowman is “definitely one of the best of Hammer’s earlier outings” (The Telltale Mind).

Extras to be announced on a later date. Pre-order now @ https://www.shoutfactory.com/product/the-abominable-snowman…