Forum List What's new Dark Style Change width
Log in Register
What's new Search
Menu
Log in
Register
Navigation
Install the app
More options
Dark Style
Close Menu
Posted on February 5, 2019 by Kevin Collins
You are using an out of date browser. It may not display this or other websites correctly.
You should upgrade or use an alternative browser.
3 Stars 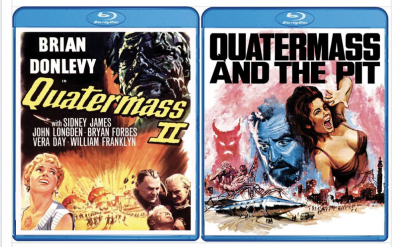 Our love for Hammer Films this year continues as we announce today that we are prepping QUATERMASS II and QUATERMASS AND THE PIT for Blu-ray releases on May 14th!

QUATERMASS II (1957): The sequel to The Quatermass Xperiment! Professor Quatermass (Brian Donlevy) is Britain’s most clever scientist. Investigating a series of bizarre incidents that have been reported from a deserted area, he finds a group of soldiers and government officials that appear to be controlled by aliens from another world. When a close friend is brutally murdered by these beings, Quatermass leads a mob of local workers to a showdown with the extraterrestrials. The film was retitled Enemy from Space for its U.S. theatrical release.

QUATERMASS AND THE PIT (1967): Hobbs End, Knightsbridge, London. While working on a new subway tunnel for the London Underground, a group of construction workers uncover a strangely shaped skull. Nearby, another discovery: a large, mysterious and impenetrable metal object. Initially mistaken for an unexploded bomb, the object and its strange power turn out to be far more horrific than anybody could have possibly imagined. Is it of this earth? Could it be the ancestral link to mankind’s evolution? Or could it be an ancient link to the unleashing of the ultimate evil? There’s only one man capable of unravelling the clues, and his name is Professor Bernard Quatermass (Andrew Keir), a man of science who thrives on the dark mysteries of the world. Written by legendary screenwriter Nigel Kneale, Quatermass And The Pit is a seminal British sci-fi classic. For its U.S. release by 20th Century Fox, the film was retitled Five Million Years to Earth.

Extras and specs are in progress and will be announced on a later date.