Warner Bros.’ attempt at launching another cinematic universe, mining the properties of Hanna Barbera, is a bit of a mixed bag in Scoob!, arriving on 4K UHD Blu-ray after bypassing theatres for a Pay-Per-View premiere due to the COVID-19 pandemic.

Early trailers for Scoob! gave the impression the film would be an origin story of how a young Shaggy and Scooby Doo first met and the formation of Mystery Inc. with Fred, Daphne, and Velma. That origin story (which I’ll admit is rather cute, including a nearly shot-for-shot re-creation of the title sequence from the 1970s Scooby Doo, Where Are You! TV series) is resolved in the first 12 minutes, leading into the main story that begins with the team from Mystery Inc. asking Simon Cowell to invest in their detective agency. Cowell declines investing, citing Shaggy (Will Forte) and Scooby (Frank Welker) as dead weight. Dejected, the two go to a bowling alley, only to be attacked by a team of miniature killer robots and abducted to safety by Dee Dee Sykes (Kiersey Clemons), pilot for Blue Falcon (Mark Wahlberg) and Dynomutt (Ken Jeong). It turns out that the killer robots were sent my Dick Dastardly (Jason Isaacs), who wants Scooby to open Alexander the Great’s gateway to Hell, since Scooby is the last living descendant of Alexander’s dog Peritas, and only a descendant of either has the genetic coding to open the lock. Why does Dastardly want to open the gates of Hell? Simple, to retrieve Alexander the Great’s fortune of gold and to free Dastardly’s dog Muttly who was left behind in a failed attempt to open the gateway. Along the way, we meet Captain Caveman (Tracy Morgan) in a sequence that goes on a bit too long (like most of this movie).

I really struggled to like this movie, as I used to watch Scooby Doo, Where Are You on Saturday mornings in the 1970s. While those episodes often hinted at the supernatural, they were always explained away as something the villain of the week devised as a way to make people think that a ghost or spirit was behind the mystery. That is not the case in Scoob, as the supernatural threat is real, although the filmmakers do try to recreate that reveal as a joke. Speaking of jokes, many of them fall flat for no reason I can muster other than they just were not funny, in particular the playing of the AT&T Startup tone just before Dee Dee is introduced. The animation is also rather flat, which is a surprise considering this is a CGI animated film. The characters look too perfect, their skin and clothing sometimes appearing like plastic. Fred’s face is the worst of the bunch, often lacking any definition. If there is a bright spot in the film, it is in the voice casting. Voice veteran Frank Welker is perfect at Scooby, the only hold-over voiced actor from the more recent direct-to-video Scooby-Doo movie releases. Jason Isaacs sounds like he’s having way too much fun as the voice of Dick Dastardly, as does Ken Jeong as Dynomutt. Kiersey Clemons is often overly enthusiastic as the young Dee Dee Sykes. Zac Efron, Amanda Seyfried, and Gina Rodriguez are also great as the voices of Fred, Daphne, and Velma, respectively. Will Forte as also good as the voice of Shaggy but is no match to Matthew Lillard who assumed the role in the earlier live action and recent animated films from Casey Kasem. The real disappointment in the voice cast is Mark Wahlberg as the Blue Falcon, who often sounds like he’s there to voice a character in an animated film for his kids.

There is no indication on IMDB as to what resolution Scoob! was rendered and/or completed at, but I assume it was originally rendered and completed as a 2K digital intermediate. Warner’s HEVC-encoded 2160p upscale is a decent, albeit slight, upgrade from Blu-ray, offering both HDR10 and HDR10+ high dynamic range. There is a small but noticeable increase in fine detail, mostly in textures such as Scooby’s fur and character’s clothing, as well as sand in the early sequence at Venice Beach. Color and contrast are also slightly improved, with more noticeable color shading and contrast is better controlled (many of the brighter sequences appeared overly hot on the Blu-ray compared to the UHD disc).

The default DTS-HD Master Audio 5.1 track is quite good, offering excellent fidelity and dynamic range and an active surround mix where necessary. Sounds flow rather seamlessly within the listening area. LFE is strong, again where needed. Dialogue is clear and understandable throughout.

All of the Special Features can be found on the included Blu-ray edition of the movie.

Bloopers (1080p; 3:58): A better description would be a hodgepodge of clips from the actors’ recording sessions. Interestingly, Mark Wahlberg is nowhere to be seen.

Digital Copy: An insert contains a code to redeem a digital copy of Scoob! (in UHD where available) on Movies Anywhere.

I found Scoob! to be a major disappointment, despite going in with low expectations. Presentation-wise, this is a fine disc, but the extras feel tacked on. 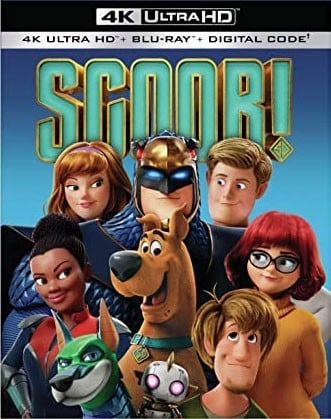