Forum List What's new Dark Style Change width
Log in Register
What's new Search
Menu
Log in
Register
Navigation
Install the app
More options
Dark Style
Close Menu
Posted on February 12, 2019 by Josh Steinberg
You are using an out of date browser. It may not display this or other websites correctly.
You should upgrade or use an alternative browser.
Leo McCarey’s final film is well-made but morally dubious. 2.5 Stars

Satan Never Sleeps, the final film from Leo McCarey, showcases the kind of fine performances that are a trademark of many of the director’s earlier works. But while McCarey’s direction is solid and the cast is noteworthy, the story concludes on a note so distasteful that all of that work is invalidated.

Leo McCarey’s production of Satan Never Sleeps has all of the hallmarks of a great film, starting with McCarey’s excellent direction, and inclusive of great performances from William Holden, Clifton Webb and France Nuyen. But the script, based on Pearl S. Buck’s novel and adapted for the screen by McCarey and Claude Binyon, takes a hard turn in its conclusion that is so reprehensible that it nullifies any of the enjoyment that might have come prior.

I would like to tell you that William Holden, in the lead role as a Catholic priest arriving to serve as a missionary in China during the Communist Revolution, is fantastic. I’d also like to tell you that Clifton Webb, as an older priest who Holden shares mission duties with, is wonderful in his final screen role. I’d also like to mention that France Nuyen, as Siu Lan, a local Chinese girl harboring a crush for Holden, is marvelously expressive in a role that requires great sensitivity. It’s probably also worth mentioning that Leo McCarey’s direction is first rate, keeping the film moving at such a good pace that it never felt to be anywhere near the 125 minutes that it actually is. McCarey’s use of the CinemaScope frame is also well done.

And yet, I can’t help but feel that none of that really matters. In order to explain why, please be warned that the rest of the “production” section of this review will contain spoilers. (If you would like to know more about the disc’s technical specifications and bonus features without reading the spoilers, please skip to the remaining sections below.)

The film’s plot essentially boils down to a battle of wits between the priests and Ho San (played by Weaver Lee), the local leader who had once been a student of Webb’s at the mission before trading Catholicism for Communism. Ho San doesn’t just want the priests to leave; he wants them to declare that their religion is a fraud so that it can be discredited. The more the priests resist, the more determined Ho San is to destroy them. On one of his many visits to the mission, Ho San notices the young maiden played by Nuyen, and viciously rapes her; Holden’s character tries to intervene but is beaten and tied up. She becomes pregnant as a result of the rape, and eventually gives birth to a son. Ho San expresses interest in the child, while showing no remorse for his actions. In a series of quick turnarounds, Ho San will come to see the Communist regime as being evil, which will lead to him plotting his escape from China. Shockingly, the priests and Nuyen all conspire to help him escape, and Webb even sacrifices himself in the process. The film then cuts to a coda where Nuyen is happily married to her rapist, with the concluding scene showing Holden’s priest baptizing the baby – as Nuyen reveals that she still has a crush on the priest.

To be clear, that rape is a topic in the film is not the problem; that the filmmakers have crafted a happy ending that seems to condone rape is. There are countless examples in both history and art where a rape victim is forced to marry her abuser, but that is not the story that this film tells. No, this film shows Nuyen becoming friendly with her rapist mostly because he would like things to be that way. That the rapist’s life is valued more highly than the kind elderly priest’s is a troublesome message. That all of this ugliness is waved away for the sake of a comedic ending coda is beyond distasteful. This is a film that resorts to depicting rape for the sake of creating drama and action in its third act, but runs away from honestly portraying the aftermath of such an action when it becomes narratively inconvenient. What starts out as a minor subplot becomes a stone which pulls the entire film underwater with it.

Satan Never Sleeps is presented in its original aspect ratio of 2.35:1. Like many of the recent Fox CinemaScope transfers, this release is rock steady, with good color and contrast, and a light grain which appears both period-accurate and unobtrusive.

Two audio options are presented on the disc, both in the lossless DTS-HD MA format. The default track is labeled as “English 2.0” and appears to be one of the fake stereo remixes that Fox used to create for home video releases. Stereo separation is virtually non-existent. The second track and preferred option is labeled as “English 1.0” and is the film’s original mono fix. (It is actually a 2.0 track with the same monaural signal coming from the left and right speakers.) The mono mix sounds stronger and fuller, with well-recorded dialogue that is always easy to discern.

Original Theatrical Trailer (3:30, SD) – The film’s lengthy trailer is presented in the film’s original aspect ratio and is in reasonably good condition. It emphasizes Nuyen’s crush on Holden while also revealing many of the film’s later turns.

Satan Never Sleeps is a competently made film from a great director and with a great cast, but the film ultimately unravels under the weight of its morally questionable storytelling. Though the film’s content is problematic, it has nonetheless been given a quality presentation from Twilight Time, though this release lacks their usually isolated music track.

Regarding the lack of an isolated score on this, no music elements existed. There was no usable M&E track either.

Neil S. Bulk said:
Regarding the lack of an isolated score on this, no music elements existed. There was no usable M&E track either.

Thanks for shedding some light on that - I figured it had to be something along those lines. I know that Twilight Time wouldn't be in the habit of dropping it without a good reason.
You must log in or register to reply here. 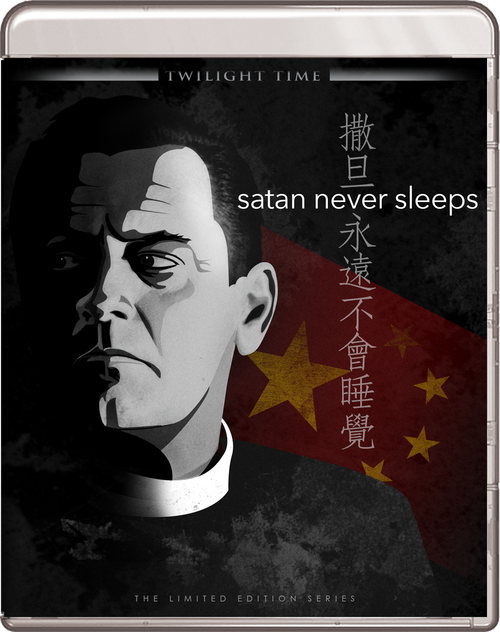