Forum List What's new Dark Style Change width
Log in Register
What's new Search
Menu
Log in
Register
Navigation
Install the app
More options
Dark Style
Close Menu
Posted on September 20, 2018 by Matt Hough
You are using an out of date browser. It may not display this or other websites correctly.
You should upgrade or use an alternative browser.
A tepid period melodrama is enhanced by restored color and excellent 3D. 3.5 Stars

A post-Revolutionary War melodrama that’s more ornate than dramatic, Edward Ludwig’s Sangaree has an opulent production, gorgeous leading actors, and 3D as a primary selling point, but its potential for action and adventure remains somewhat underdeveloped with a trio of difficult conflicts that the leading man must deal with that aren’t milked for their all of their dramatic possibilities. The script includes a surprise or two and one or two moments of momentary brawling, but the promise of a lavish costume adventure with action happening in every corner of the screen unfortunately isn’t fully realized.

It is the dying wish of wealthy Savannah businessman General Darby (Lester Mathews) that his extensive shipping company and vast plantation holdings be overseen by Dr. Charles Morales (Fernando Lamas), a lower class serving boy whom the general had taken under his wing and provided the means for a European education to match his own son’s Dr. Roy Darby (Tom Drake). Darby’s beautiful daughter Nancy (Arlene Dahl) is insulted that her impressive efforts of keeping the plantation and company going during the war weren’t more appreciated by her father, and she and her haughty fiancé Harvey Bristol (John Sutton) have every intention of fighting Darby’s will in court. Morales also finds other problems awaiting him when he arrives in Savannah: best friend Roy’s wife Martha (Patricia Medina) continually throws herself at him never having forgotten their early love for one another, a pirate ship possibly manned by the notorious Felix Pagnol (Charles Korvin) has been harassing the Darby shipping enterprises, and the threat of bubonic plague threatens to break out in Savannah due to the negligence of the previous city medical officer (Francis L. Sullivan).

David Duncan’s screenplay (adapted by Frank Moss from the novel by Frank G. Slaughter) sorts out the numerous cast of characters nicely never overpowering us with too many at one time but managing to squeeze a goodly number of them into a very crowded screenplay. He’s attempted to introduce a few surprises into the script, too, some of which work well (the identity of the real culprit behind the pirating) and others which are so transparent as to be insulting to the audience’s intelligence (the introduction of Nancy Darby into the story, a situation that fools no one but the main character). But despite a luxurious production which allows costume designer Edith Head to fashion a panoply of eighteenth century gowns and suits for her large cast, director Edward Ludwig doesn’t take advantage of his story’s overheated melodrama by tamping down most of the action sequences. A barroom brawl has some punch (no pun intended), but the sabotage of the pirate ship isn’t milked for nearly enough suspense, and the climax which involves a duel, a face-off at a potentially rat-infested warehouse, and the final confrontation with the film’s real scoundrel are all fairly flatly handled with some of the action happening off screen and other times keeping the 3D cameras at too discreet a distance to properly involve the audience in the mayhem.

Fernando Lamas cuts a handsome figure in his period wardrobe that in some cases he seems poured into, and he does his best with dialogue that doesn’t always wrap around his tongue very deftly. He and Arlene Dahl have excellent chemistry together (they married a year after Sangaree was produced) while she on her own likewise is beautiful in the ornate costumes and shows some fire in scenes that demand some show of emotion. Patricia Medina demonstrates the best grasp of the melodramatic nature of the piece throwing herself into her amorous role as a potential adulteress and relishing her final moments on screen. No one can put over haughty class superiority like Francis L. Sullivan who positively revels in his arrogance and snootiness. John Sutton makes a fitting son for such superciliousness. Tom Drake and Willard Parker lend able support as Morales’ true blue friends.

The film’s original theatrical 1.37:1 aspect ratio is faithfully delivered in 1080p resolution using the MVC (3D)/AVC (2D) codec. Another winning restoration by the 3-D Film Archive finds colors restored very nicely from almost impossibly terrible source materials. The images are mostly bright and sharp especially in close-ups (the patterns in weave of Lamas’ coats are crisp and precise) though there is occasional blurriness which was likely inherent in the original cinematography, and color values may vary from shot to shot due to the unequal quality of the decomposing materials. Clean up has been most impressive with scratches and dirt virtually eliminated for a pleasing viewing experience.

As with most Golden Age 3D films, the 3D images are a mix of great depth, impressive placement of objects on differing planes in camera set-ups, and forward projection. While purists might wish for more pop-outs, plenty of barrels, boxes, and knives are thrown at the camera while horses gallop right into our faces. There’s a moment where in the warehouse standoff, a man stands with a rifle gently pointing downward that pokes forward past the screen, and the opening Paramount logo features a sensational 3 Dimensional script title that floats before our eyes magnificently.

The DTS-HD Master Audio 2.0 mono sound mix has been cleaned up beautifully and sounds solid throughout with no troublesome hiss, crackle, pops, or flutter. The well-recorded dialogue, the sound effects, and the music by Lucien Cailliet have been mixed quite professionally and come off well.

Restoration Demo (5:36, 3D): before and after shots and split screen sequences demonstrate the monumental work of the 3-D Film Archive in rescuing this film and bringing it back to a very viewable state.

The 3-D Film Archive has reason to be proud of another salvage job, this time Edward Ludwig’s Sangaree, another Golden Age 3D title which returns to home screens in far better shape than we have any right to expect. While the film doesn’t quite wring every bit of drama and suspense out of the story it has to tell, the stars look beautiful, and the 3D is most effective. Admirers of the process won’t want to be without this one.

Great review, Matt - I can’t wait to get my copy!
E

I will be adding this also.

On order and pretty much a must have here.
You must log in or register to reply here. 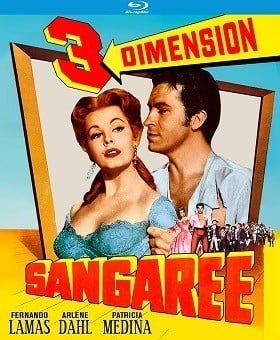