Posted on July 23, 2016 by Matt Hough
Uneven coming of age story is overly ambitious but ruined by an infuriating transfer. 2.5 Stars

An adolescent coming of age story marked by some beautiful outdoor locations, a menagerie of animals both friendly and vicious, and a couple of troubled family relationships that need mending: all are grist for the moviemakers’ mill in James B. Clark’s The Sad Horse.

An adolescent coming of age story marked by some beautiful outdoor locations, a menagerie of animals both friendly and vicious, and a couple of troubled family relationships that need mending: all are grist for the moviemakers’ mill in James B. Clark’s The Sad Horse. There are some touching lessons to be learned along the way about faithfulness and duty, but themes get a bit mangled in an overcrowded story in which the varying plotlines don’t really get the development they deserve and resolutions are arrived at with the least amount of emotional disturbance and soul-searching angst.

Partially lame from polio, ten-year old Jackie Connors (David Ladd) with his dog Hansel spends the summer on his grandfather’s (Chill Wills) ranch while his widowed father (Gregg Palmer) is off on his honeymoon with new wife Sheila (Eve Brent) who Jackie feels is an interloper in the family. A new arrival at the ranch is separated-from-her-husband (Rex Reason) Leslie MacDonald (Patrice Wymore) with her once champion race horse North Wind. The horse has lost heart when his canine friend died, but during the summer Jackie’s pooch Hansel and North Wind become close pals and North Wind begins racing like a champion again. Leslie wants to buy Hansel from Jackie, but he’s not interested in parting with his dog, even with appeals from Leslie’s husband Bill who comes calling to mend his tattered marriage to Leslie.

Pulitzer Prize-winning playwright Zoe Akins penned the original story which has been adapted for the screen by Charles Hoffman, but with both the new Connor marriage and the old MacDonald marriage on rocky terrain, Jackie trying to come to terms with his world changing, and a crusty grandfather dispensing pearls of wisdom with almost every turn of phrase, the movie’s narrative is more ambitious than it’s able to manage without lots of psychological shortcuts that end problems quickly and with a minimum of fuss. Added to that are Jackie and Hansel’s adventures during the summer including searching for buried stagecoach gold from the last century and a couple of nasty encounters with rattlesnakes and a bloodthirsty cougar. Because the original Cinemascope image has been cropped and pan and scanned, director James B. Clark’s cinematic compositions are impossible to judge, but apparently the movie has been filmed mostly outdoors, and what little we get to see of the ranch setting appears beautifully expansive with lots of interesting nooks and crannies for a boy and his dog to lose themselves in on lazy summer days. For those who were hoping this might be another My Friend Flicka, The Black Stallion, or National Velvet, there is actually not much interaction between Jackie and the horse North Wind apart from one memorable moment midway through the movie when a wind storm spooks the horse and Jackie and Hansel go after him which builds the strong bond between the dog and the horse that the conflict in the second half of the movie revolves around.

David Ladd gives a somewhat curious performance as the somewhat tortured Jackie. Much of the movie for him is a monologue as Jackie works through his problems and arrives at solutions on his own while talking to his pooch Hansel. In scenes with the adults, he’s sometimes emotionally spot-on and other times curiously removed and rather deadpan, a very erratic performance. Much better are Rex Reason and Patrice Wymore as the battling MacDonalds. He’s very slick and at ease with lines and physical business; she’s more prickly and inconsistent but in general gives an agreeable performance. In attempting to be a bit less homey and drawly, Chill Wills seems sometimes a little stiff and ill-at-ease (he plays a twinkly matchmaker for both couples) though he’s certainly a loving and understanding grandpa. Gregg Palmer and Eve Brent are acceptable as Jackie’s parents while William Yip as ranch cook and handyman Ben gets a couple of fun scenes in the spotlight which he does fine with.

True to many lunkheaded decisions made for films in the Fox Cinema Archives program, the film’s original Cinemascope 2.35:1 aspect ratio has been compromised by the antiquated use of pan and scan reducing the frame to 1.33:1 thus completely ruining the director’s widescreen compositions of this mostly outdoor drama (we do get three minutes of letterboxed widescreen exposure during the movie’s opening credits). People are now cut out of frame and compositions are squashed uncomfortably. Sharpness varies due to the nature of the cropping and blowing up process. Color values too are compromised with skin tones a discomforting orange most of the way through though saturation levels are strong. Black levels are certainly adequate, and while the reel change markers pop up occasionally, there are fewer instances of dust and dirt than one might expect. The movie has been divided into chapters every ten minutes so this disc contains 8 chapters.

The disc’s Dolby Digital 2.0 mono sound mix is decoded by Dolby Prologic into the center channel. Dialogue is always easy to understand and is never compromised by the background music or the atmospheric effects which have decent fidelity for elements of this age. Artifacts like hiss or crackle have been minimized.

The Sad Horse on DVD could have upped its entertainment quotient considerably had it been given a decent widescreen transfer presenting some of its most striking elements, its outdoor vistas and lovely cinematography, in the best possible light. As is, the decidedly lacking image quality and overly stuffed scenario makes for a less than satisfying viewing experience. 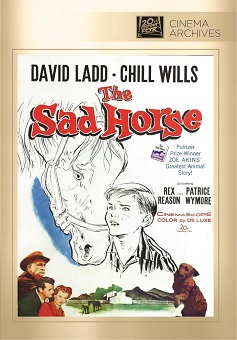