Forum List What's new Dark Style Change width
Log in Register
What's new Search
Menu
Log in
Register
Navigation
Install the app
More options
Dark Style
Close Menu
Posted on March 20, 2018 by Josh Steinberg
You are using an out of date browser. It may not display this or other websites correctly.
You should upgrade or use an alternative browser.
W.C. Fields in a feature-length silent comedy 4 Stars

W.C. Fields headlines this 1927 silent classic, which is more narrative driven than some of his other classics. Though it doesn’t boast any famous routines, the comedy here is often funnier because it is inspired by the plot rather than being built around it.

Though the 1927 Paramount production of Running Wild, directed by Gregory La Cava, was not a box office smash upon its original release, it is one of the best films made by W.C. Fields in his silent period. Whereas some of his other extant silents, including It’s The Old Army Game (also available on Blu-ray from Kino), are more of a collection of routines loosely stitched together by the thinnest of plots, Running Wild is more narratively ambitious. Though none of the comedy routines are individually as memorable as some of the set pieces from It’s The Old Army Game, the cumulative effect of watching the comedy in Running Wild arising from the plot (rather than being dictated by it) leads to a more effective film.

This time, W.C. Fields is Elmer Finch, a cowardly man surrounded by people he can’t say no to. As the intertitle jokes, Finch’s first mistake was marrying his second wife (Marie Shotwell), who with her overgrown son (Barnett Raskin), sees Finch as someone to be taken advantage of, who can never do well enough by her no matter how much she nags. Even Finch’s daughter from his first marriage (Mary Brian) is oblivious to Finch’s dire straits as she asks for new dresses that he can’t afford. Of course, working the same job as a clerk for twenty years without a raise can lead to financial trouble, and Finch is too timid to speak up at the office either. Worse, his daughter’s fiancé is the son of the company president, but is unable to put in a good word for his future father-in-law. An unfortunate meeting with a potential client leads to Finch nearly being fired when he loses the account.

Things take a turn when Finch is given a chance to redeem himself. Sent on a mission to a delinquent account holder who is prone to beating up bill collectors, Finch predictably flees in terror. However, in trying to escape, he winds up running through a back alley and into an open stage door, right into a theater where a hypnotist is performing. Mistaken for an audience volunteer, Finch is hypnotized into believing that he has the strength and courage of a lion. With his newfound fearlessness, Finch is now ready to take on all of the adversaries that have held him down: the delinquent, his bosses, and finally, his family. Just as everything had gone against Finch in the first half of the picture, things start to go gloriously right for him in the second half.

Fields’ onscreen persona takes an important step forward in Running Wild. Whereas It’s The Old Army Game and the earlier silent shorts had often had Fields portraying unscrupulous characters, Running Wild presents him as a more sympathetic man. Not only is there humor in watching Fields’ character suffer multiple indignities in the film’s first half, but there’s also catharsis when Fields begins to stand up for himself. This allows the audience to be more than just amused by the film but to actually be rooting for Fields to succeed. And by tying the various subplots to the fate of Fields’ character (for instance, making the girl in the “love story” subplot Fields’ daughter rather than just a paid assistant), those subplots are able to tie into the main story rather than detouring away from it.

Though Running Wild was not a runaway box office hit, it did suggest a new way forward for W.C. Fields. Fields would continue to have success with this new style of plotting well into his sound era, with features like You’re Telling Me! and The Man In The Flying Trapeze. For the director, though his collaborations with Fields would conclude at the end of the silent era, Gregory La Cava would go on to work in sound, including several that would be among his best remembered today (My Man Godfrey and Stage Door).

The transfer is based on a new 2K scan of 35mm film elements held at the Library of Congress. The black and white film is presented in its original 1.33:1 aspect ratio via the AVC codec. When it is at its best, it appears even better than It’s The Old Army Game, but at its worse, exhibits more signs of damage and age. Though less consistent overall than It’s The Old Army Game, Running Wild is entirely watchable and looks fantastic for a film of its vintage. Even when the image is less than pristine, it’s never difficult to understand whats happening on screen, and the level of detail and clarity is stunning for a film from 1927.

For this release, Kino has commissioned a new piano score from Donald Sosin, which is presented in DTS-HD MA 2.0 stereo. This is a well-recorded and enthusiastic score which perfectly complements the action onscreen. Sosin’s energetic playing lends excitement to the proceedings, emphasizing the comedy and human drama onscreen. Though we obviously cannot hear the voice of Fields, Sosin’s piano does an admirable job of filling that void.

Audio Commentary by film historian James L. Neibeur – Like Neibeur’s commentary on It’s The Old Army Game, this recording is also a bit of a mixed bag. Neibeur is clearly knowledgeable about Fields, though he seems to have less to say specifically about Running Wild than he did about It’s The Old Army Game. He seems to narrate the onscreen action here more than in Army Game, and there are moments of silence as he lapses into watching the film before offering a comment. On the positive side, the recording fidelity of this track is significantly better than the one for It’s The Old Army Game, with Neibeur’s voice coming across with more clarity and fewer audio anomalies. Though it is not a perfect commentary, there is so little bonus material available related to the Fields filmography that it is still an appreciated effort.

Running Wild, along with It’s The Old Army Game, represent the first Blu-ray appearances for W.C. Fields features. Though Running Wild is not as well known as Fields’ sound pictures, this film has a lot to offer for fans of the comedian. In particular, Running Wild has more of a structured plot than some of Fields’ other work. Though some of the setups may seem familiar, the comedy routines that come out of those scenarios are mostly unique to this film and tie directly into the film’s plot. Even without sound, it is impossible to deny the brilliance of Fields’ comic timing. Kino’s Blu-ray release is the best the film has ever looked for a home audience, making this a valuable addition to any silent film or classic comedy collection. 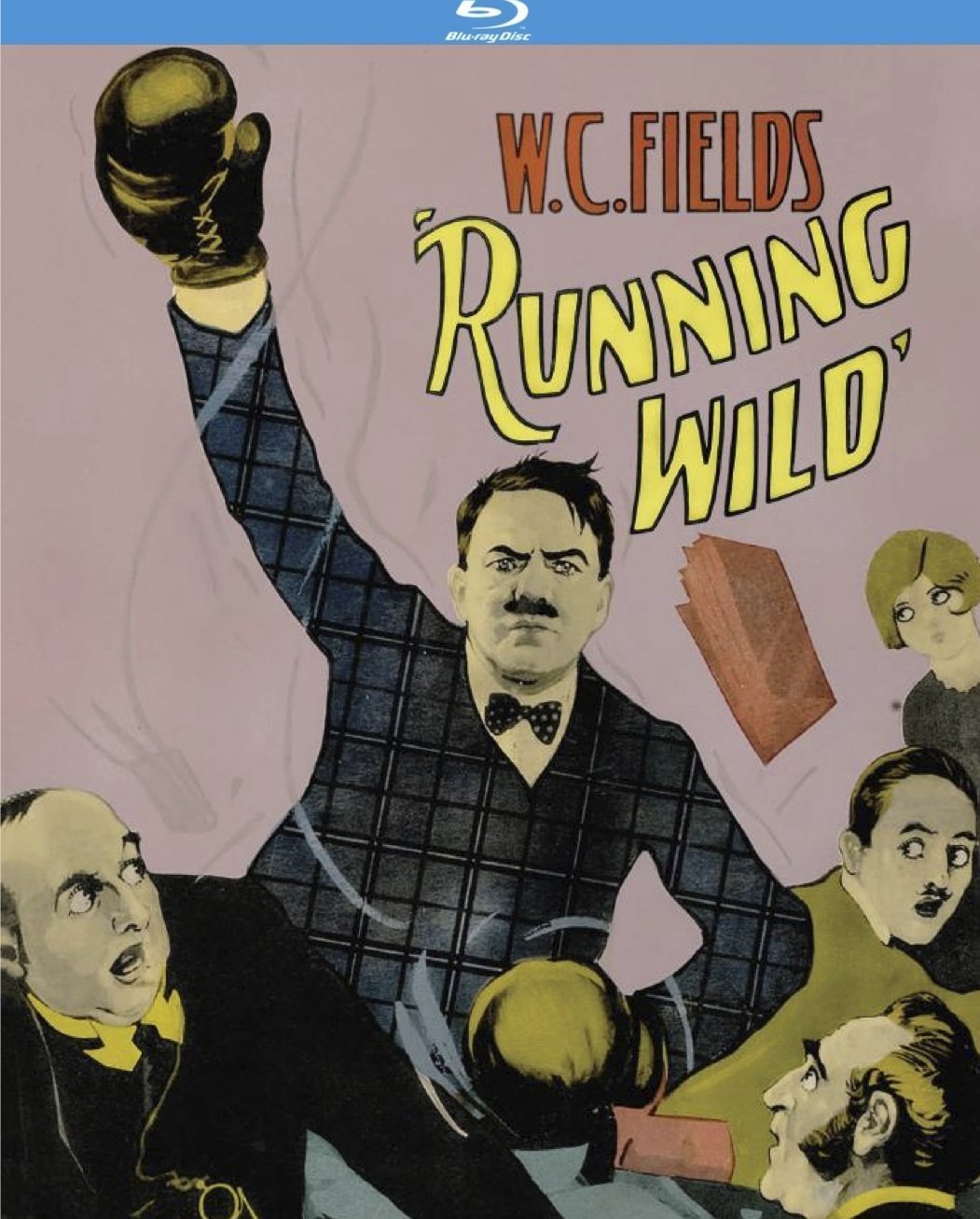