Forum List What's new Dark Style Change width
Log in Register
What's new Search
Menu
Log in
Register
Navigation
Install the app
More options
Dark Style
Close Menu
Posted on March 28, 2021 by t1g3r5fan
You are using an out of date browser. It may not display this or other websites correctly.
You should upgrade or use an alternative browser.
Cannon action classic re-released on Blu-ray 4 Stars

During the 1980’s, film producers (and cousins) Menahem Golan and Yoram Globus took Hollywood by storm through their ownership of independent film company Cannon Films. While mostly known for turning out several cult favorites during the decade – including the first 3 Death Wish sequels, Missing in Action (1984) and The Delta Force (1986) – they were also known to dip their toes into more respectable fare; Runaway Train is one of their best known efforts in this regard. Previously released on Region B Blu-ray by Arrow and here in America in a limited batch run by Twilight Time, Kino has brought the movie back into print with this latest Blu-ray release.

Oscar “Manny” Mannheim (Jon Voight) commands a lot of respect and admiration from his fellow inmates in the brutal Stonehaven Prison in the heart of Alaska. After getting released from solitary confinement from a failed escape attempt, he makes a break yet again – this time successfully and with Buck McGeehy (Eric Roberts) coming along. However, the euphoria is short lived as they board a train whose engineer suffers an incapacitating heart attack and begins to speed out of control through the vast Alaskan wilderness. Now with Stonehaven’s sadistic warden in hot pursuit and a railroad worker also on board with them, Manny and Buck now must find a way to stop the train and escape with their lives or die trying!

Runaway Train is the crown jewel of Cannon Films during the 1980’s and also one of the most underrated action movies of all time. Under the direction of Andrei Konchalovsky and working from a script by Djordje Milicevic, Paul Zindel and Edward Bunker (from a script by Akira Kurosawa, Hideo Oguni and Ryuzo Kikushima that was slated for production but ultimately never got filmed during the 1960’s), the film sets the tone early on with a brutal look at prison life that also establishes our characters and the dynamic between them. Once we leave the prison walls, the movie really kicks into high gear as the escape plan goes wrong and we’re also treated to scenes of how the railroad officials are trying to avert even greater disaster. Perhaps the most defining quality of all is the remarkable humanistic touch given to the two lead characters who are hardened criminals and the poetic feel of the scenes as the train barrels through the snow and ice covered countryside; thanks to the great work of editor Henry Richardson (who earned an Oscar nomination for his work here), composer Trevor Jones and cinematographer Alan Hume, it appears that some of Kurosawa’s defining traits that marked many of his movies and which are evident in the original unfilmed script are kept intact in the final product. With the confluence of great talent both behind and in front of the camera, Runaway Train is a rare breed of action movie: one that’s both thrilling and yet also visually poetic with a healthy dose of humanism thrown in; it’s a potent blend that’s worthy of multiple viewings.

Earning a Best Actor Oscar nomination her for his portrayal of the steely Manny, Jon Voight is given one of the best roles of his career; he would also win a Golden Globe for this role as well. Eric Roberts was nominated for his lone Academy Award (so far) for Best Supporting Actor as the chatty inmate Buck who tags along with Manny on the escape; he’s gone on to have a prolific career in movie and television and his daughter Emma has followed into acting as well. Rebecca De Mornay doesn’t appear until about halfway into the film’s running time, but she makes the most of her role as a railroad worker who picked the wrong time to take a nap; character actor John P. Ryan chews the scenery here as the sadistic warden Ranken, hell bent on making sure Manny never tastes freedom at all. Rounding out the cast here are Kenneth McMillan, Kyle T. Heffner and T.K. Carter as a group of railroad dispatchers desperately trying to derail the runaway train, co-screenwriter Edward Bunker as the convict Jonah, Hank Worden as an elderly convict, and “tough guy” character actors Danny Trejo and “Tiny” Lister making their film debuts here as – respectively – a prison boxer and a prison guard duped by Buck in the successful escape attempt.

The film is presented in its original 1:85:1 aspect ratio, taken from a brand new 2K master created for this release. Film grain is organic with slightly noticeable shifts in quality in some scenes between on location and studio shots, but the color palette is faithfully represented along with fine details in sharp detail. There’s minimal issues here like scratches, dirt, and tears; overall, this transfer appears to be just slightly better than the previous Twilight Time release (which was already very good in the picture quality department), but leaps and bounds better than the old MGM DVD.

The film’s original soundtrack is presented on a DTS-HD Master Audio track for this release. Dialogue is both strong and clear, with the sound mix and the sparse yet effectively used Trevor Jones score (with a memorably haunting use of Antonio Vivaldi’s Gloria in D Major) also given faithful representation as well; there’s no issues like distortion, crackling, popping or hissing present. Again, this track is similar to Twilight Time’s release, but a vast improvement over the MGM DVD.

Commentary with actor Eric Roberts and film historians David Del Valle & C. Courtney Joyner – Ported over from the Twilight Time Blu-ray release, the trio talk about the movie’s production, some behind the scenes details as well as a few from Roberts’ career; a very entertaining track that’s absolutely worth a listen.

Trailers from Hell with filmmaker Rod Lurie (2:49) – Carried over from the Arrow Blu-ray release, Lurie provides commentary over the wide release trailer featuring the critical plaudits during awards season.

Theatrical Trailer (1:58) – This is the original trailer from the initial release run; interestingly enough, the trailer features music selections from Lifeforce by Henry Mancini rather than selections of Trevor Jones’ score for this one!

Special features not carried over here include an isolated score track, an MGM 90th anniversary trailer and a booklet featuring an essay by Julie Kirgo from the Twilight Time release; the Region B Arrow release included interviews with director Andrei Konchalovsky, actors Jon Voight, Kyle T. Heffner and Eric Roberts that didn’t make the cut here.

A near perfect blend of action, suspense and pathos, Runaway Train has become one of the best – if mostly underrated – movies of the 1980’s that’s also one of the best movies Cannon Films ever released. Kino has successfully brought the movie back into print with a solid HD transfer as well as carrying over the great commentary track from the Twilight Time release as the main draw in the special features. Very highly recommended and worth upgrading if you’ve missed on the previous Twilight Time Blu-ray.

I absolutely loved this film when it was released into theaters. Great performances from all involved. Definitely be getting this during the next Kino sale.

thanks for the great review!

I was among the fortunate to get the Twilight Time release. Great film.
You must log in or register to reply here. 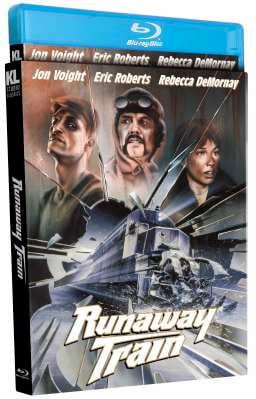