A quality thriller with outstanding performances and a more poetic feel than usual for this kind of movie. 4 Stars

Andrei Konchalovsky’s tough-as-nails prison escape picture Runaway Train is a thriller of rare and curiously majestic tone, quite a surprise coming from the Cannon Group which usually packaged cheap exploitation pictures of no great merit.

Andrei Konchalovsky’s tough-as-nails prison escape picture Runaway Train is a thriller of rare and curiously majestic tone, quite a surprise coming from the Cannon Group which usually packaged cheap exploitation pictures of no great merit. Here, first-rate actors and a magnificent production shot partly on location in Alaska mesmerize at every turn, and the perils for the protagonists continue unabated while the viewer clasps his chair in ever tighter grips.

Managing a break from Stonehaven Prison in Alaska, Oscar ‘Manny’ Manheim (Jon Voight) and Buck McGeehy (Eric Roberts) hop on board a queue of four diesel train engines heading away from the prison, but little do they know that the engineer has suffered a fatal heart attack, and the train is now unpiloted and speeding out of control. While head of the control center Frank Barstow (Kyle T. Heffner) is trying to clear a path for the out-of-control railway behemoth, the fierce Alaskan winter and problems with antiquated equipment make stopping the train impossible. Meanwhile, Warden Ranken (John P. Ryan) who by now knows that the two escapees are on board that speeding train has vowed not to let the men, particularly his nemesis Manheim, elude his grasp.

There are a lot of marvelous things about the script by Djordje Milicevic, Paul Zindel, and Edward Bunker (based on a script by Akira Kurosawa), not the least of which is that a rapist (Buck) and a murderer (Manheim) are made the protagonists who have the audience’s rooting interest and the prison warden becomes the despicable heavy of the story. It’s in some ways a tale of redemption for Manheim as the vicious thug over the course of his experience in this treacherous journey finally reclaims his humanity, but not before undergoing a series of hair-raising close calls where his life and the life of both Buck and railroad worker Sara (Rebecca De Mornay), who turns up halfway through the movie having fallen asleep on the train before it went careening out of control, are all in the balance. Director Andrei Konchalovsky establishes the brutal prison life early on (passages that weren’t in the original Kurosawa story) with some very evocative scenes that let us get to know both our protagonists (Manheim the toughest of the tough and simple-minded Buck who wins an in-prison boxing match before latching on to hero Manny) and the smirking warden who’s as nasty a piece of goods as many of the prisoners and which shows prison riots and the uneasy control the guards have over the convicts in sometimes painterly-like fashion (throughout, the director softens the movie’s brutality with poetic touches giving this thriller a very unique tone). Of course, once the train goes berserk and we endure a breathless series of climaxes with the train in constant peril, the combination of location photography and scenes staged back on a Hollywood soundstage are blended so masterfully that you’ll never believe for an instant that much of that ice and snow were manmade concoctions and not furnished by Mother Nature.

Jon Voight and Eric Roberts both earned Oscar nominations for their tour de force performances. Voight really seems made of iron here with a fierce will to survive and a no-nonsense mentality that shows his viciousness and potential for brutality clearly and distinctly. Roberts’ chatterbox Southern simpleton offers most of the more light-hearted moments in the movie, though admittedly they are few and far between. Rebecca De Mornay’s character Sara is rather indifferently defined and often seems extraneous to the action. John P. Ryan’s Warden Ranken is one of the most memorable prison-oriented villains in cinema, and his galvanizing performance always dominates the screen (except in scenes with Voight who easily holds his own with him). Kyle T. Heffner, Kenneth McMillan, and T.K. Carter as railroad control men each does yeoman work in those warm but intense interior scenes which contrast so vitally with the show-encrusted cabs of the runaway train engines. Edward Bunker has some effective early scenes as an experienced con who’s a favorite of Manheim’s.

The film’s 1.85:1 theatrical aspect ratio is retained in this 1080p transfer using the AVC codec. Apart from a few scattered dust specks, the transfer is an excellent one with outstanding sharpness in interior shots (some of the second unit long shots of the train are understandably soft in the haze and filtered light). Color in interior shots (such as during the boxing match) can be richly saturated though much of the color is more subdued due to the climate conditions trying to be matched between locations and studio work. Contrast has been consistently maintained. The movie has been divided into 24 chapters.

The DTS-HD Master Audio 2.0 stereo sound mix is an effective one. Dialogue is always understandable, and it’s been combined expertly with Trevor Jones’ spare yet haunting score and the excellent sound effects which, of course, don’t have quite the impact that a more modern action thriller of today would have but for their era are very nicely integrated. Age-related problems with hiss and crackle don’t exist.

Audio Commentary: film historians David Del Valle and Courtney Joyner are joined by Oscar-nominee Eric Roberts in a lively conversation about the making of the movie and about other memorable films in the actor’s history. Filled with entertaining and informative anecdotes, it’s a must-listen.

Six-Page Booklet: contains some color stills, original poster art on the back cover, and film historian Julie Kirgo’s insightful essay on the movie.

Nominated for three Academy Awards and featuring exceptional performances and a thrill-filled narrative that continually holds one’s attention, Runaway Train comes to Blu-ray in a spiffy new edition with a firm recommendation. There are only 3,000 copies of this Blu-ray available. Those interested in purchasing it should go to either www.twilighttimemovies.com or www.screenarchives.com to see if product is still in stock. Information about the movie can also be found via Facebook at www.facebook.com/twilighttimemovies.

"quite a surprise coming from the Cannon Group which usually packaged cheap exploitation pictures of no great merit."

Hey! I will not hear an unkind word against Invasion USA or American Ninja! How dare you, sir!
Reactions: SAhmed

Tony J Case said:
"quite a surprise coming from the Cannon Group which usually packaged cheap exploitation pictures of no great merit."

Hey! I will not hear an unkind word against Invasion USA or American Ninja! How dare you, sir!
Click to expand... 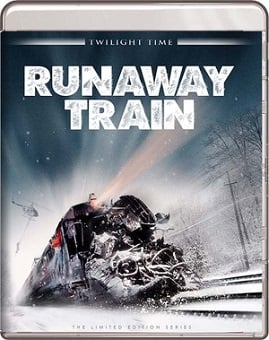