Forum List What's new Dark Style Change width
Log in Register
What's new Search
Menu
Log in
Register
Navigation
Install the app
More options
Dark Style
Close Menu
Posted on February 21, 2021 by t1g3r5fan
You are using an out of date browser. It may not display this or other websites correctly.
You should upgrade or use an alternative browser.
Tense Dean Martin western debuts on Blu 3.5 Stars

Though he’s best known today as a member of the Rat Pack and for the many celebrity roasts he hosted on TV during the 1970’s, Dean Martin was also an actor when he first entered Hollywood. After spending much of the 1940’s and 1950’s as part of a nightclub act and movie team with Jerry Lewis, he soon branched out on his own and achieved greater fame as a singer as well. While not really known for Westerns (despite appearing in 10 – 11 if you count the Martin and Lewis vehicle Pardners), he got a plum part in the movie Rough Night in Jericho; previously released on MOD DVD by Universal, Kino has licensed the film for its Blu-ray debut.

There was a time when Alex Flood (Dean Martin) swore to protect and serve the people of Jericho as a lawman; however, those days are long gone, since he now controls much of the town with a tight fist and a group of hired guns to enforce his will. When Flood sets his sights on adding the town’s stagecoach line to his possessions, he has to contend with Molly Lang (Jean Simmons), who not only owns the line but used to be Flood’s lover and detests the man he has become. She tries to get Dolan (George Peppard) – one of her partners in the line – to stand up to Flood and his men, but he refuses (thinking that any man going up against Flood must have a death wish), at least at first. However, once he’s been pushed over the line, Dolan will soon teach Flood that every man has a breaking point and that he has picked one fight too many…

Arnold Laven may be better known today for producing the classic TV shows The Rifleman and The Big Valley, but his penultimate film as a director, Rough Night in Jericho, is among his best efforts. From the start, a feeling of tension and unease is established and is maintained throughout the film; when you have not only an ambush of a stagecoach but a public lynching right within the first 25 minutes of a movie, it certainly grabs your attention. Laven should also be commended for effectively casting Dean Martin against type as a villain; it would be the only time Martin would play the part in his film career. Also notable is the fact that the violence here is a little more graphic than what preceded westerns up to that point; it’s interesting to note that the movie was released in the same year in which Sergio Leone’s westerns were first released to American theaters for the first time and the Production Code would effectively be ended and replaced by the ratings system the next year. With all of these elements in place, Rough Night at Jericho comes at a conjunction between where westerns hung on to the classical tropes while a shift in how violence could be shown on screen allowed for movies to explore new boundaries; in short, this is a movie that has fallen under the radar and is worth another look.

While Dean Martin does a great job against type here, it would be remiss to not mention the contributions of several of the supporting cast as well. As the hero who eventually sheds his neutral stance against Flood, George Peppard acquits himself quite well as the former deputy turned gambler Dolan; his previous excursion into Western territory prior to this movie was the all-star saga How the West Was Won (1962). Jean Simmons also does very well as the strong willed Molly; she was no stranger to the Western as well, having previously appeared in William Wyler’s The Big Country (1958). Character actor John McIntire is well cast as the grizzled ex-lawman Hickman while Don Galloway and Slim Pickens stand out amongst the remaining supporting players as – respectively – Jericho’s former sheriff forced out by Flood and one of the hired guns used to enforce Flood’s law.

The film is presented in its original 2:35:1 aspect ratio for this release. Film grain is organic with fine details, color palette and skin tones each given faithful representations; there’s minimal issues like scratches, dirt, tears or fading present here. Overall, this is likely the best the movie will ever look on home video and easily surpasses the Universal MOD DVD.

The film’s original mono soundtrack is presented on a DTS-HD Master Audio track for this release. Dialogue is strong and clear, with an equally strong, clear and faithful representation extended to the sound mix and Don Costa’s score; there’s little to no problems like distortion, crackling, popping or hissing present here. This is by far the best the movie will ever sound on home video and an another improvement over the MOD DVD.

Commentary by film historian Samm Deighan – Recorded for this release, Deighan goes over the production details, cast and crew bios as well as why this movie stands out in Dean Martin’s filmography.

While it was mostly passed over during it’s initial run, Rough Night in Jericho is a tense and well made western that’s worthy of rediscovery. Kino’s great Blu-ray release should assist in that process with a solid HD transfer and an informative and insightful commentary track as a special feature. Very highly recommended and worth upgrading from the MOD DVD.

This western wasn’t passed over by Bobby Crawford in the summer of 1967. I watched this BD around its release date so I concur with this fine review.

Robert Crawford said:
This western wasn’t passed over by Bobby Crawford in the summer of 1967. I watched this BD around its release date so I concur with this fine review.
Click to expand...

Nor by me! I've always admired Dean Martin for being willing to play characters with serious flaws.
You must log in or register to reply here. 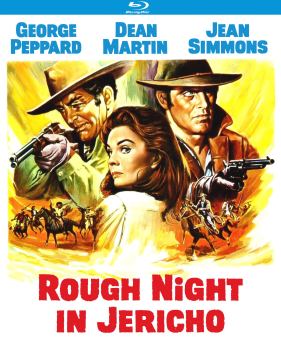