Posted on March 4, 2016 by Matt Hough
A heart-wrenching drama with few equals 4.5 Stars

A heart wrenching drama with few equals, Lenny Abrahamson’s Room does unique, fascinating things with its psychologically dramatic framework allowing us the most personal glimpses inside a mother’s deeply felt love for her child and then shifting gears to focus on the dexterity of the human psyche to process and assimilate new stimuli.

A heart wrenching drama with few equals, Lenny Abrahamson’s Room does unique, fascinating things with its psychologically dramatic framework allowing us the most personal glimpses inside a mother’s deeply felt love for her child and then shifting gears to focus on the dexterity of the human psyche to process and assimilate new stimuli. And the most remarkable aspect of the storytelling is that it’s mostly handled through the eyes of a five-year old child. Captivatingly quiet while remaining emotionally complex throughout, Room is a film that will linger long in the memory once it’s seen.

Held in a single room garden shed by her captor (Sean Bridgers) for seven years, Joy (Brie Larson) had five years previously given birth to son Jack (Jacob Tremblay), a precocious child who knows life only from within the confines of a 10 X 10 foot room. Jack has given Joy a reason to continue living, but she begins fearing for his safety as he gets older and more independent and plots her child’s escape. Willing to make the sacrifice if it means her child can learn about the real world, Joy surprisingly survives her ordeal only to be confronted with a surprisingly painful adjustment to real life again, an adjustment her young son finds somewhat easier to maneuver than she does, both of them aided greatly by Joy’s concerned mother (Joan Allen) and her new husband (Matt Gordon).

Author Emma Donoghue has adapted her own novel for the screen, so the book’s basic framework – the first half of the film (approximately an hour) in confinement followed by the second half, almost another hour, of coping with the world with mother and son having very dramatically different experiences back in society – is followed rather scrupulously. Director Lenny Abrahamson really does a remarkable job exploring every nook and cranny of Room (their home truly becomes a character especially to the boy who considers Room and each object in it as acquaintances), and the mundane tasks of everyday living get nice coverage before we begin to get bits and pieces of what this mother and child are doing there. The escape plan and its clumsy execution (where we’re sure there’s going to be a murder) contain a fair degree of suspense, and the police’s tracing steps back to the shed may seem a bit too routinely easy, but it all launches us into the film’s second half where director Abrahamson then focuses more closely than ever on Jack as he makes discovery after discovery in this strange, new, and challenging environment. Cascading emotions come quickly and thickly especially in the second half as the grandparents struggle with mixtures of guilt, happiness, and relief and Joy quickly feels overwhelming outside judgments weighing down on her for choices made over the previous seven years (a callous news reporter is no help). Watching the plucky Jack slowly but methodically emerge from the cocoon of his mother’s protection and embrace this new world is unquestionably thrilling and gives what could have been a shattering and unbearably painful second half of the film a real lift and the audience a great sense of accomplishment.

Brie Larson gives a devastating performance as the mother desperate to protect and nurture her son, but you’ll likely finish the film with an even greater sense of wonder about the unforgettable performance of Jacob Tremblay as Jack. Handling complex emotions and situations even an adult would find incredibly difficult to master, Tremblay is simply magnificent and never makes a false step, completely believable as a petulant five-year old whose anger can subside as quickly as it arrives and carefully modulating his acceptance of new people and new things. Joan Allen is also superb as the grandmother doing all she can to be gentle and understanding but with a spine of steel when needed. Sean Bridgers is just creepy enough as Old Nick the abductor without going overboard while William H. Macy has a couple of key moments as the grandfather having a hard time coping with a returned daughter and a new grandchild. Matt Gordon as Doug and Amanda Brugel as the patient police officer who gently pries information out of the shy Jack also make firm impressions.

The film’s original theatrical aspect ratio of 2.40:1 is faithfully rendered in this 1080p transfer using the AVC codec. Unshowy but crystal clear in its picture clarity, the image boasts consistently applied contrast and color which is of necessity vivid when need be and controlled otherwise with realistic skin tones throughout. Black levels are quite good. The movie has been divided into 16 chapters.

The DTS-HD Master Audio 5.1 soundtrack offers a strong mix of well recorded dialogue (with finely modulated looping that is indistinguishable from the direct recording) and some occasional directionalized vocal effects that give nice dimension to the narrative moments of the picture. Stephen Rennicks’ gentle background score gets a nice spread through the fronts and rears while split atmospheric effects also make themselves known subtly.

Making Room (12:03, HD): director Lenny Abrahamson, writer Emma Donoghue, producer Ed Guiney, and actors Brie Larson and Jacob Tremblay offer insights into the production of the movie revealing that unlike most films, it was shot in sequence.

11 X 11 (9:06, HD): production designer Ethan Tobman discusses his designs for the shed set and how it was built to allow for filming from multiple angles. Also contributing comments to the discussion of the important focal point of the movie’s first half are Brie Larson, cinematographer Danny Cohen, director Lenny Abrahamson, and writer Emma Donoghue.

A beautifully made and emotionally rich film with devastating performances that will stay with you long after the final credits have concluded, Room certainly deserved its Oscar nomination as one of 2015’s best films. Picture and sound quality are befitting a new film release on Blu-ray, and the entire package comes highly recommended. 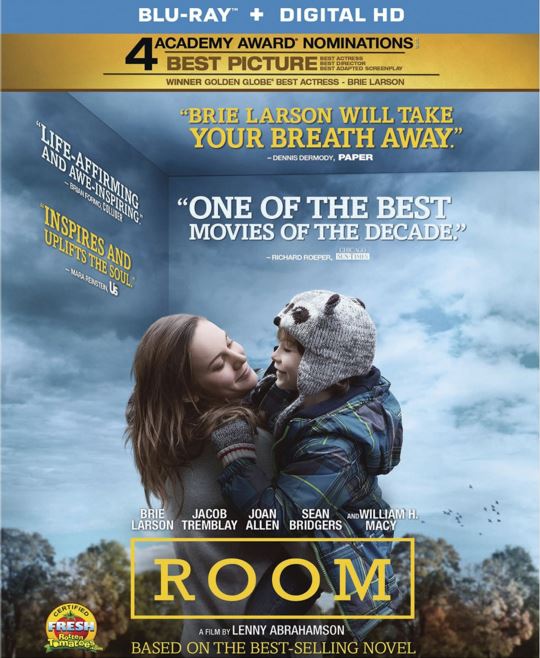